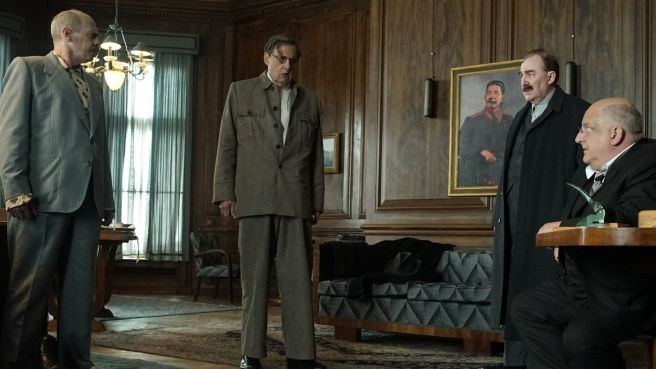 Armando Iannucci is, if nothing else, the defining political comedian of our era. The anti-Aaron Sorkin, he understands that politics is about power, and nothing else. His lying, manipulative, vulgar, grasping, venal, and above all stupid bureaucrats, officials, advisors and other governing detritus barely even pay lip service to the ideals and ideology valorized in the word of the last era’s most celebrated propagandist, Aaron Sorkin, and Iannucci, with his television series The Thick of It and Veep and his film In the Loop, seems to have dedicated himself to undermining and unraveling all the myths and delusions of propriety, fair play and principled centrism that The West Wing perpetuated. I don’t know that the functionaries of Iannucci’s work are any more “accurate” than Sorkin’s heroes and heroines, but they seem like it. And in their degradation they certainly speak more to the present moment than the earnest ideologues of neo-liberal technocracy. That Iannucci can so deftly translate his style from the world of contemporary American politics to that of Soviet Russia should tell us a lot about what politics truly is: games of manipulation performed by the vile, the scheming and the moronic for the sake of self-preservation and, above all, power.

The Death of Stalin, based on a French graphic novel, begins on the last day of the Russian dictator’s life. He eats a big meal with his closest advisors: Khrushchev (Steve Buscemi), Beria (Simon Russell Beale), and Malenkov (Jeffrey Tambor), watches a Western (I couldn’t tell which one, but they toast Wayne and John Ford at the end of their boozy night) and, left alone in his room, suffers a cerebral hemorrhage. He’s not discovered until the next morning and, because he’d recently killed or exiled all the best doctors in Moscow, he’s unable to receive medical attention until it’s too late. The delay is exacerbated by the scheming of his advisors, most of whom are more than willing to let the man die: as soon as his condition is discovered Beria and Khrushchev begin their plotting, a race to secure the support of the various other members of the inner circle and the various state security forces. Beria, as head of the secret police (called the NKVD at this point), has the initial advantage, and is able to manipulate Malenkov (a fool in most things and especially devoted to Stalin: a pointed reminder that in a totalitarian state the only officials who survive long enough to attain any kind of importance are either evil or stupid or both), who as Stalin’s deputy becomes the titular ruler in his absence.

The scramble for control between Khrushchev and Beria is greatly accelerated in time: events that here transpire over only a few days in fact took about six months, but while the film certainly takes liberties with historical fact, in its essence it is accurate. A host of fascinating side characters fill out the world, the overwhelming sense of terror and irrationality and double-thinking inherent in the Stalinist state. Olga Kurylenko plays the pianist Maria Yudina, whose defiant note to Stalin (included in a concert recording, the apocryphal story of which opens the film) may have killed him. Michael Palin plays Molotov, a longtime Stalin ally who had been marked for death but is rescued by the dictator’s demise, who nonetheless sticks to the Stalinist party line (Palin gives maybe the best performance in the film, and Molotov is its most dizzying character, a cruel man driven mad by even greater cruelties). Jason Isaacs appears late in the film as General Zhukov, bedecked in a lunatic assembly of medals, who comes to Khrushchev’s aid. But the Beria/Khrushchev conflict is at the film’s core: Beria tries to consolidate power by appearing to overthrow the “excesses” of Stalinism, positioning himself as a reformer while merely switching out one list of enemies for another. Khrushchev, on the other hand, actually is a reformer (well, relatively speaking), and while he (apparently) lacks Beria’s most vile qualities (in addition to all the murders, Beria was a perpetrator of just about every sex crime you can imagine) he has no qualms about exercising any means necessary to achieve his goals.

The Death of Stalin is deeply, darkly funny at almost every moment, like all of Iannucci’s work. Whether in the petty infighting and reversals of the Soviet leaders, to minor side-plots like the comic opening sequence with the fear and panic of the Radio Moscow technicians when Stalin requests a recording of a concert that was broadcast live, forcing them (led by Paddy Considine) to regather the audience and musicians to play the whole thing again, or the desperate scrambling of Stalin’s children, suddenly pawns in a greater game they are wholly unequipped to play (the son’s coaching of the state hockey team is especially funny), or more terrifying background action, like the cold brutal efficiency in which everyone in Stalin’s household is rounded up and shot by the NKVD. It’s an absurdist world where there are literally no moral or ideological values, and only the people who actually understand that truth are able to achieve power.

Following up their excellent 2014 rom-com Obvious Child, director Robespierre and star Jenny Slate reunite for a family comedy set in 1995. Slate and her teenage sister (Abby Quinn) discover their father (John Turturro) is cheating on their mom (Edie Falco) and spiral out of control into comic misadventures. Robespierre’s films resemble much of 21st century Hollywood comedy in their openness, vulgarity and spontaneity, but they have an emotional depth and maturity that the Apatows can’t fathom.