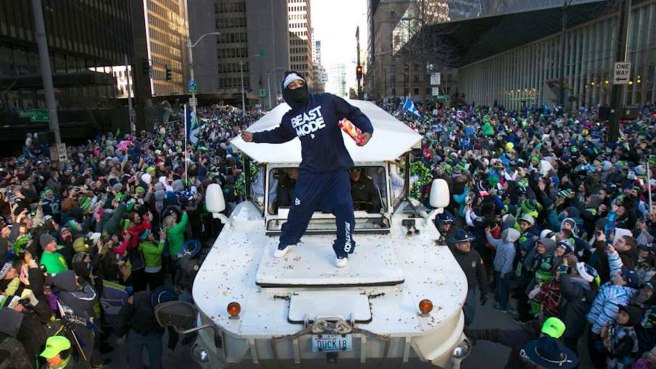 If this movie was nothing more than a collection of randomly-edited clips of Marshawn Lynch doing stuff, it’d still be one of the most entertaining films of this year’s Seattle International Film Festival. But like its subject, there’s a lot more to Lynch: A History than catch-phrases, crotch-grabs, and motherfuckers getting their faces run through. Director David Shields, an English professor at the University of Washington, is best known as the author of the acclaimed Black Planet, a look at race and the NBA through the lens of the SuperSonics 1994-95 season. Lynch appears to be a follow-up to that story, using the football player, and his contentious history with the media, as a way to explore the confluence of race, sports, and the media. Like Lynch himself, at various times gregarious, silly, hilarious, taciturn, guarded, shy, and angry, the film heightens the contradictions of a systemically racist society that elevates young, physically gifted black men into multimillionaire role models while attempting to control their every means of expression.

Entirely made up of archival film clips, hitting all the highlights, on the field and off, of Lynch’s public career, the film situates him in a long history of Bay Area radicals, Oakland residents from Jack London to Bobby Seale to Tupac Shakur. We get clips of African folklorists discussing trickster gods intercut with classic hilarious Lynch clips (like driving the cart around the field at Cal, or drinking a fan-proffered bottle of Fireball and throwing Skittles to the crowd during the Seahawks’ Super Bowl victory parade). We get all the amazing runs (deeply-profane fan videos of the Beast Quake are always welcome) and all the self-righteous whining from the media about Lynch’s refusal to answer their stupid questions. About the only great Lynch content I noticed was missing was when he played Mortal Kombat with Rob Gronkowski.

Marshawn Lynch is one of my all-time favorite athletes, I’m thankful to have been closely following the team for his entire Seahawks career, and so of course I’m happy to see these clips again. But thanks to Shields’s expert editing and contextualizing of Lynch’s life and the coverage of it, it’s impossible to watch all this without questioning our own complicity in American racism. The obvious morons of the sports media world, the guys that call Colin Kaepernick dumb for example, make for easy targets (we’re all Randy Moss glaring at Trent Dilfer). More difficult is trying to understand just how much of our enjoyment of Lynch’s surreal weirdness and his other-worldly physicality on the field is based on his conforming to the limited and limiting roles (clown, thug, angry youth) available to black men in the public eye. Possibly as disturbing is the broader question of whether a life lived in that public eye, as it has been for star athletes for a long time and as it increasingly seems to be for the rest of us, can ever possibly be authentic and not just an amalgam of adopted roles and stereotypes, and if that’s always been the case anyway, regardless of the omnipresence of panoptic media.