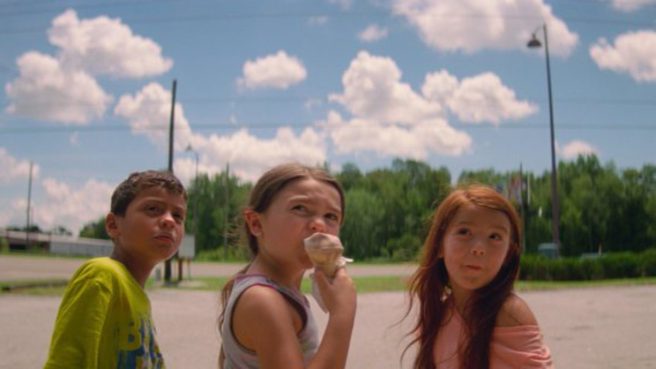 Tangerine director Sean Baker returns to Seattle Screens this week with another tale of life on the margins of 21st century capitalism. Set entirely around the vicinity of the cheerfully purple Magic Castle motel, a semiurban wasteland of hotels, abandoned houses and oversized promotional mascots bordering the unapproachable dream of Disney World, Baker takes for his heroes a small group of children, led by Moonee (Brooklynn Prince), an amoral, loudmouth innocent trying to entertain herself over summer break. The first half of the film mostly follows her adventures with the neighbor kids in the motel (begging for change to buy ice cream, playing hide and seek in the motel office, exploring empty houses and what passes for countryside amid Orlando’s sprawl). The second half focuses more on Moonee’s mother, just as loud, but more amoral, as she resorts to increasingly inappropriate ways of earning the weekly rent cash. Uniting it all is the weary presence of Willem Dafoe, motel manager, a good man trying to do his job with compassion and honor.

Like Tangerine, Baker films with a sun-dappled luminosity that’s all but anathema in the European art house tradition of films about poverty. Being poor isn’t supposed to look nice, or fun, and the easiest way to convey that is with a drab grunginess. The Florida Project rejects that approach, but also the kind of somber mysticism that makes things like Beasts of the Southern Wild* or George Washington palatable for a mass audience. His models instead go back further, to the Depression: Hal Roach and the Little Rascals are thanked in the credits, and the influence of those stories of kids being poor but nonetheless being kids is clear. I was reminded as well of Frank Borzage’s classic No Greater Glory, about unsupervised children recreating the martial ideologies and conflicts of their parents’ generation, with tragic consequences. The kids in The Florida Project aren’t playing war games, but are instead learning their parents’ approaches to failing in capitalism: acting out against things, not people – they vandalize objects of wealth, a car, a house. One of their first acts of terror is literally turning off power. Poverty in The Florida Project never looks fun, it looks brutal and crushingly sad (the unseen face of the boy forced to give away all his toys because they don’t fit in his father’s car when they’re moving away). But it’s still sunny in Florida, and there is ice cream and cows and maple syrup to be found.

END_OF_DOCUMENT_TOKEN_TO_BE_REPLACED

It seems fair to say that one of the biggest breakouts in the film world during these past few years was 2015’s Tangerine, co-written and directed by Sean Baker. Garnering almost as much attention for its empathetic, energetic focus on trans female sex workers in Los Angeles as it did for its ultra-low-budget shooting style on three iPhone 5Ss, one could easily assume that the movie was Baker’s directorial debut. But in point of fact, the movie was his fifth feature, and with his sixth and latest film, The Florida Project, Baker returns to his favored shooting format of 35mm, this time in the at once fantastical and sober environs of Orlando, Florida.

Whereas Tangerine aimed for an almost abrasive, unapologetic energy, with its narrative confined to the drama of a web of relationships on Christmas Eve, The Florida Project‘s goal is something more sprawling and languorous. The film takes place over a summer at the Magic Castle, a motel-cum-extended-stay complex in the shadow of Disney World, focusing on Moonee (Brooklynn Prince, remarkable), a wild six-year-old, and Halley (Bria Vinaite), her equally uncontrolled mother. What framework of a narrative unspools at a leisurely pace, mostly content to observe as Moonee plays with a set of friends around the alternately pastoral and urban area surrounding the motel.

END_OF_DOCUMENT_TOKEN_TO_BE_REPLACED

It is Christmas Eve in Hollywood, a day in Tinseltown when everything is even more brightly showy than usual. It’s a town of glitz and dreams and fantasies, where stars soar higher than high and multitudes of others scramble below to make a living in those stars’ dusty grit. A few golden names will get a terrazzo or brass star on Hollywood Boulevard, an aspirational spot on the ground that is, perhaps ironically, open to be trod on by anyone in need of a sidewalk. And there is something of that sly irony in Sean Baker’s newest film, Tangerine, for Baker is a good deal more interested in those doing the treading on those stars, those who walk on and work in the streets, than in those who have their names emblazoned into them. And indeed, as the film opens – a shot of two pairs of hands clasping and exchanging a doughnut over a table at Donut Time, a place that couldn’t be farther from the showiness of the Walk of Fame – I am a good deal less curious about the stars whose names I might recognize than I am about to whom those hands on the table belong.

The hands are Sin-Dee’s (Kitana Kiki Rodriguez) and Alexandra’s (Mya Taylor), two friends, two transgender sex workers, whose journey, set all in one day in the Los Angeles streets and in the day-to-day haunts of those who make a living on the streets, invites us to question what we know, or what we think we know, about Los Angeles and those who live in it. Is the city, and by extension its inhabitants, as one character in the film puts it, a “beautifully wrapped lie”? END_OF_DOCUMENT_TOKEN_TO_BE_REPLACED