After a lengthy absence, The Frances Farmer Show returns with a quick look at some films playing on Seattle Screens, including a preview of Terence Davies’s Emily Dickinson biopic A Quiet Passion, which opens here on May 5th. We then discuss Wong Kar-wai’s mid-90s masterpieces Chungking Express and Fallen Angels. 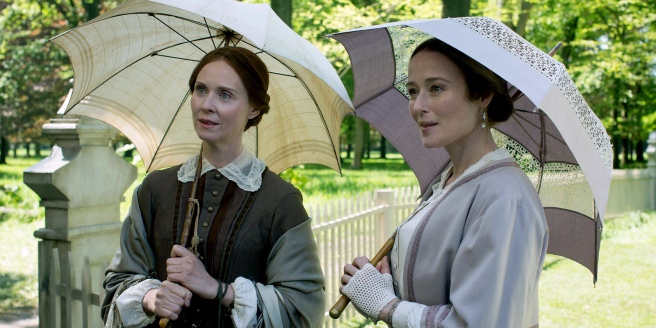 If Sunset Song, Terence Davies’s other recent feature, is a film of the enduring earth, than A Quiet Passion is a film of the withering body, the mortal coil that wheezes and shakes and is finally shuffled off. Human fragility, of both the corporeal and spiritual variety, haunts Emily Dickinson from the opening moments, in which a puritanical interrogator questions the young poet about her relationship with God and the promise of hell. Religion’s frightening specter shadows even the warmest moments in Davies’s cinema—the terror is a scar, an old spur in his bones—though here it takes on a specifically American character. Quoth New England theologian Jonathan Edwards: “The God that holds you over the pit of hell, much as one holds a spider, or some loathsome insect over the fire, abhors you, and is dreadfully provoked.” A gossamer-thin suspension is all that holds Emily Dickinson above the eternal flames.

The signal achievement of A Quiet Passion is to render the world of Dickinson’s New England with burnished clarity, to conjure the specifics of time, place, and ideology from which her art emerges. The intellectual foment of 19th century New England arguably represents the earliest maturity of American thought, a spiritual founding to echo the political founding a half century earlier. Dickinson’s poetry claims a clear piece of this lineage. Less clear are the narrative possibilities offered by her life’s story. Dickinson rarely left the house and Davies’s eye does not violate this cloister. A swirling camera and symphonic music are the director’s instruments, which can elevate even the hard-scrabble existence of a young Liverpudlian to heights of poetry, and here they transfigure the space of the Dickinson estate into a expanse of wallpaper and candlelight, and most importantly, they give remarkable sonorousness to an otherwise hushed life. The spirit of the age lives alone in a room upstairs.

On paper this sounds theoretical—more The American Scholar than “Tell all the truth and tell it slant”—but Davies is constitutionally incapable of making something so dry, and in addition to his trademark romanticism, A Quiet Passion also possess more wit than any other movie this year, save perhaps for Love and Friendship. Early passages provide Ms. Dickinson, and actress Cynthia Nixon, with a roundelay of able sparring partners. The barbs that fly in these scenes occasionally best Whit Stillman at his own game. But if we’re sticking with cinematic references, George Cukor might be more apropos. The classical auteur’s ability to reveal depth of character beneath each perfectly-timed quip gets taken up by Davies here, who understands that Emily Dickinson’s inner life is profoundly rich, though just out of reach for those around her. Humor opens up a window into the poet’s soul, and the fear and trembling that finally beset her are all the more tragic for the spirit they trample out.

A Quiet Passion’s parade of exits (“they all go” is the poet’s summation of solitude) rounds out with Dickinson’s own. The biopic ends where it must, at the grave’s hard, eternal earth, though it should be clear as we arrive at this final resting place that A Quiet Passion is as personal as anything in Davies’s career. Even a cursory knowledge of his life reveals the connection to Dickinson’s: his struggles with his sexuality, his trembling before the void, and the necessary—though always inadequate—consolation provided by his art. “You have your posterity,” Emily’s sister says to comfort her. “And you have your life,” she responds. Dickinson seems willing to trade all the glories of her poetry for a few hours of certain joy and one wonders if Davies, in his old age, might do the same. The world is richer for their abiding beauties, but in the face of mortality the afterlife of art is cold comfort for all their departed, unhappy days.

At the center of Terence Davies’s new film, Sunset Song, adapted from Lewis Grassic Gibbon’s 1932 book of the same title, is a wedding. It is a modest affair, a barn for its stage, humble farming folk its participants. It is a celebration of love, a communal joyful gathering, a candle-bright warm pocket in the middle of a dark, snowy New Year’s Eve. And when the bride, Chris Guthrie (Agyness Deyn), sees the barn, prepared by her friends, she says, delighted, “It is like a picture book.” And it is.

In the midst of the merriment, the company calls for a song from the bride, and she sits at their center and sings. It is a sunset song, glowing in the deep colors of grief for the day that has gone, a song for the dead, a song of mourners. It is “Flooers of the Forest,” traditionally a tune played by pipers to commemorate those Scots lost in battle.  A strange choice, it might seem at first, for a wedding, but a choice that gets at the heart of this story, this place, this people, and at the heart of Chris herself. A mournful song is itself a thing of intrinsic paradox: the beauty of its words or music sit, impossibly, within the grief. The song might seem, to a strictly literal mind, to devalue the grief by the very beauty, and yet it is not a devaluation. The grief itself is more grievous, the deeper the beauty of the song. And so such a song defies the intellect, bowing to mystery. END_OF_DOCUMENT_TOKEN_TO_BE_REPLACED 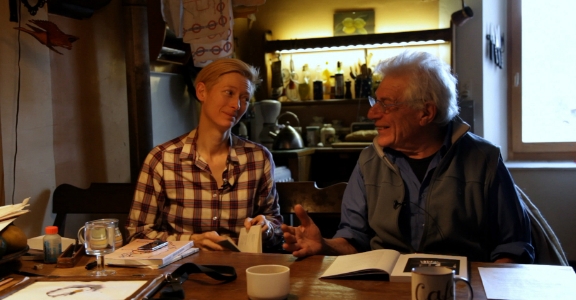 Almost halfway through the marathon that is the Seattle International Film Festival, we take a break to talk about some of the films we’ve seen so far. Movies discussed include: Chimes at Midnight, Sunset Song, Love & Friendship, Long Way North, Our Little Sister, Alone, The Island Funeral, Concerto, A Bride for Rip Van Winkle, Cameraperson, Women He’s Undressed, In a Valley of Violence, The Final Master, Lo and Behold, The Lure, Tiny, The Seasons in Quincy and A Scandal in Paris.

The woman in The Island Funeral takes a trip with her brother, not her sister.
The Seasons in Quincy starts in the winter and ends in the autumn, not summer, because that’s how seasons work. 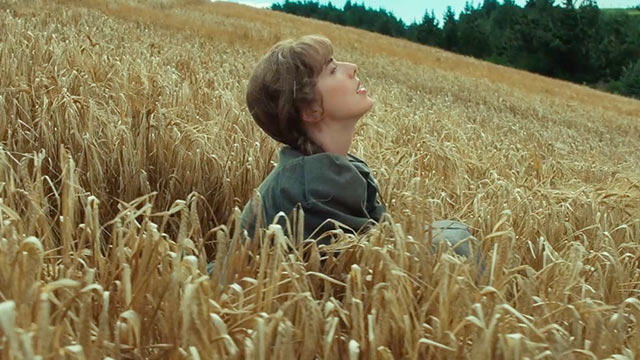 Here’s a quick run through some of the movies I’ve seen so far at this year’s Seattle International Film Festival.

Sunset Song (Terence Davies, 2015) – Out of Lewis Grassic Gibbon’s classic novel, performed in that book’s hybrid Scots-English dialect (with mostly superfluous subtitles for the Americans), Davies fashions a gorgeous inversion of Hollywood women’s melodrama. Sure, his heroine Chris Guthrie (Agyness Deyn) suffers considerably, but where the Golden Age classics trafficked in schadenfreude at the sufferings of their independent women, Davies finds absolution in Chris’s determined resistance to the patriarchal psychoses that possess first her father (Peter Mullan, a Davies father-monster recalling no less than Pete Posthlewaite in Distant Voices Still Lives) then her husband (Kevin Guthrie). An Old World rebuke to American solipsism: tomorrow is not another day–only the land endures.