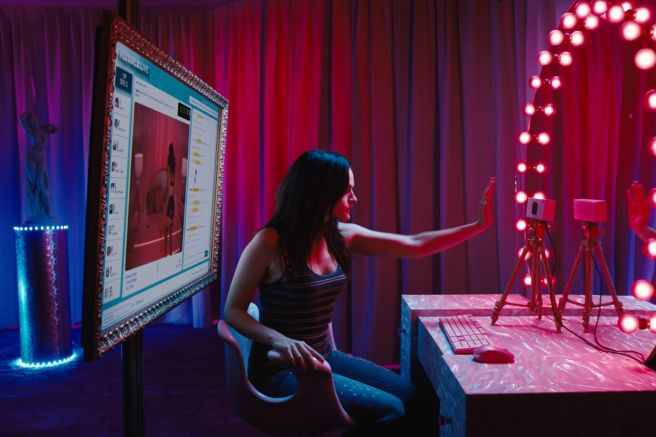 When David Fincher and Aaron Sorkin made The Social Network in 2010, a lot of discourse was generated with a lot of genuine surprise that a film about people being in front of their computers would be so compelling to watch. There was reason for that reaction: there had been and have been many films that fail to really engage in modern communications whether on computers, social media, or texting. Many filmmakers and shows outright avoid ‘the smart phone issue’, setting films in periods that predated that technology or build a world where characters simply do not engage with those ways of communication and online interaction in the narrative. But as this decade has grown from The Social Network, there has gradually developed a syntax for how films use and integrate people on computers and smart phones, how people use social media and the ways people on those platforms use technology, such as cataloguing and uploading videos. Two works, a feature film and a television program, Cam (Daniel Goldhaber and Isa Mazzei) and season 2 of American Vandal (Dan Perrault and Tony Yacenda) show the multifaceted complexities and personal stakes tied to each of their digital landscapes that go to show that you cannot just ‘get off your computer’ to remedy things when something bad happens to you online.

Cam and American Vandal, both available to stream on Netflix, both make perfect sense as entertainment to watch on your computer or electronic device. The films are not merely about their characters being entangled on the Internet–both use real-life platforms, apps, websites, and even in some cases create their own fictional but cannily similar to real-life websites and platforms which nail the dialogue our characters have with the great unknowns on the other side of their communications.

In American Vandal‘s second season, the two teenage documentary filmmakers from Season One, Sam (Griffin Guck) and Peter (Tyler Alvarez), are enlisted by the Catholic high school St. Bernadine in Washington state to solve a new incident: who spiked the cafeteria lemonade with laxatives to cause a massive ‘brown-out’ (read: diarrhea outbreak) and goes under the pseudonym “The Turd Burglar”? The Turd Burglar (online handle @theturdburglar) communicates their plans via social media with teases and oblique but ominous messages. At points even The Turd Burglar communicates with Peter and Sam as well. Part of this is lifted from common true crime tropes, such as criminals communicating with authorities, but in its high school setting and through contemporary technology, this becomes the bread and butter of American Vandal itself–a show that is a mockumentary and spoof of true crime docs in which series creator Tony Yacenda gets how to use online and smart phone communication as well as anyone. Season One (that dealt with vandalism in the teacher’s parking lot) was all about connecting clues from various witness accounts by using their phones and social media accounts which ultimate exonerated the accused. Season Two takes it a step further, namely unlike in Season One we definitively find out who committed the crime. The accused, teenager Kevin McClain, turns out to be an accessory and not the only accessory of The Turd Burglar. Peter and Sam quickly notice this is more than just a one-man job and find other students at the high school who are tied to The Turd Burglar. Like Kevin, they were all manipulated into committing these acts by blackmail because they were all catfished by an expelled student of St. Bernadine’s named Grayson Wentz, who was able to fool them all by copying and stealing from the social media account of a young woman from out of town.

The way American Vandal dives into this knotted plot is engrossing and unsettling all at once, one unshakeable scene being when Peter and Sam meet the girl who they were led to believe was the catfish of the St. Bernadine student only for her to turn out to be another victim and discovering her identity from her Instagram account got stolen on-camera. Then ‘The Dump’ (surely inspired from the iCloud leak photos of celebrities in 2014) occurs, where St. Bernadine’s students and a staff member have all of their compromising information and photos of themselves revealed to their student body and the local media. The vulnerabilities of teenagers being manipulated and used and the vulnerabilities of their technology being up for grabs to be stolen and used maliciously against them become intertwined. The season’s coda succinctly states in Peter’s narration, “We’re not the worst generation, we’re just the most exposed.”

Cam (a Blumhouse Production) is also about personal information getting compromised and stolen identity, in this case the stolen identity of a ‘cam girl’ an online sex worker on adult web sites. The film intelligently shows the blurred lines of online persona, sex work, reality, identity, and artifice, from the very start showing that not everything is as it seems. The film begins with Alice Ackerman (Madeline Brewer), who goes under the screen name of Lola­­­_Lola, broadcasting in her shag-carpeted, candy-colored room in her home as she interacts with fans who come to see her strip, perform sex acts, and other kinks that they jive with, which includes her pretending to kill herself. What makes this fake-out so effective is the building tension of Lola interacting with a troll in her comments section. It turns out that she and a friend are manipulating the situation, setting up a false troll to help Alice/Lola get attention and shoot up the rankings of the ultra-competitive cam girl website “FREEGIRLS.LIVE” (a fictional web site but a very credible imitation of that type of adult web site as far as layout and the quick, free-flowing messaging and interaction of user and performer). Over the course of the film, Alice finds out that what at first appears to be someone imitating her, or someone directly lifting videos from her shows and passing them off as their own. But it gets so much weirder than that. Cam was inspired by screenwriter Isa Mazzei’s own experiences as a cam girl which included having her own videos stolen, promoted as belonging to a different person on an adult web site. The film understands how these websites work and how the threat of stolen identity and how their anonymity can be breached and heightened. Losing your online identity becomes a kind of Steven Soderbergh meets Brian DePalma hyper-text. Alice has to confront her doppelgänger, who has become intertwined with her web persona because this is not just a hobby for her. It is lucrative work that pays her bills. So when Lola finds herself locked out of her online account, a financial resource is being cut off. This menacing omnipresence in her life is revealed to have happened because of her friend Tinker, the friend who had previously helped her rankings by posing as a troll, who created the account to feed directly into his fantasies that he felt Alice denied him.

Cam and American Vandal‘s disturbing depictions of being online can lead to cynical or alarmist readings of how bad being online can be. But that would be overlooking the many times each of them show the failure by those in power to protect these characters, whether they are still in high school or online sex workers.  School administrators, officials, as well as law enforcement in American Vandal look ridiculous in their quick rush to find a guilty party, as more ‘brown outs’ occur while Kevin McClain is under house arrest, and that they are unable to tell what is real versus manipulated, compromised ‘fake news’ shows how hapless the adults are in dealing with online-based crimes. In Cam, Alice’s run-ins with the adult web site’s customer service phone line goes nowhere and her attempt to get help from the police leads to nothing but their moral disapproval of her sex work and completely ignorant unsolicited advice like, ‘Just stay off the internet’.  Both works know how unrealistic this advice is, as the Internet is in each of their DNA formally and in how they both communicate in narrative to the viewer. One of my favorite sight gags in any film this year are the endless, ongoing messages that keep scrolling by the background in Cam whenever Alice is in the foreground. It is that level of detail becoming banal white noise that is exactly how to portray the 21st Century on-screen.

Both Cam and American Vandal know that they do not exist to solve the internet or show how to protect users with a safe and secure online experience, like a PSA or after-school special, but they do show how normal and abnormal online experiences have their own ebbs and flows. Those ebbs and flows can be significantly consequential to the depiction of the Internet as a Wild West that is boundless, as equal in promise as potential hazard. With that in mind, who could ever say a film about being in front of your computer or phone is boring?

Not much more than a DVD extra, this story of the seminal 1999-2000 TV series is fun but doesn’t really tell us anything we didn’t already know. The show had a remarkable collection of talent, almost all of whom were unknown at the time it was made. Director Brent Hodge mixes some great archival material and clips with talking heads of the cast, creators, and executives. The latter interviews are the most heart-breaking, both from the producers who championed the show and the still-clueless executives who buried and then cancelled it.