Neil Young has a habit of changing course just when everybody starts to get on his wavelength. He’ll follow up an acclaimed album of pretty acoustic songs like Harvest with some loud fucked up sadness like On the Beach and Tonight’s the Night. It’s becoming apparent that Paul Thomas Anderson is a little like that, too. Early in his career, Anderson made a name for himself as the guy who wove dozens of disparate characters into the sweeping tapestries of Boogie Nights and Magnolia. He then abandoned his templates for the anger and intimacy of Punch-Drunk Love. Now Anderson, the zig-zag wanderer, has done it again, following up two raw portraits of American ego with an adaptation of Thomas Pynchon’s Inherent Vice, a goofy escapade to the paranoid summit of Stoner Mountain. If the Coen Brothers’ Inside Llewyn Davis was the album cover of The Freewheelin’ Bob Dylan come to life, Inherent Vice is the cover and title of Young’s Everybody Knows This is Nowhere. It’s the death knell of the ‘60s being banged on a dimestore gong. END_OF_DOCUMENT_TOKEN_TO_BE_REPLACED 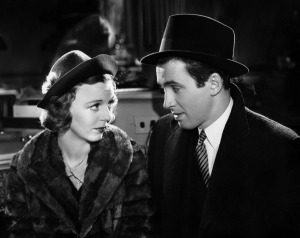 After failing to win the Best Actor Oscar for his performance in Mr. Smith Goes to Washington (he lost to Robert Donat in Goodbye, Mr. Chips, which is a very good performance in a fine film, but come on), James Stewart was rewarded by the Academy the very next year for The Philadelphia Story, in which he plays third lead to Katharine Hepburn and Cary Grant in George Cukor’s monumental screwball. He might better have won for Ernst Lubitsch’s The Shop Around the Corner, released earlier that same year, in which he co-starred with Margaret Sullavan as a pair of feuding store clerks who don’t know they’re pen pals in love. Both films are playing this week at the Grand Illusion, on 35mm (the GI continues to be the last great bastion of repertory-on-film in the Seattle area).