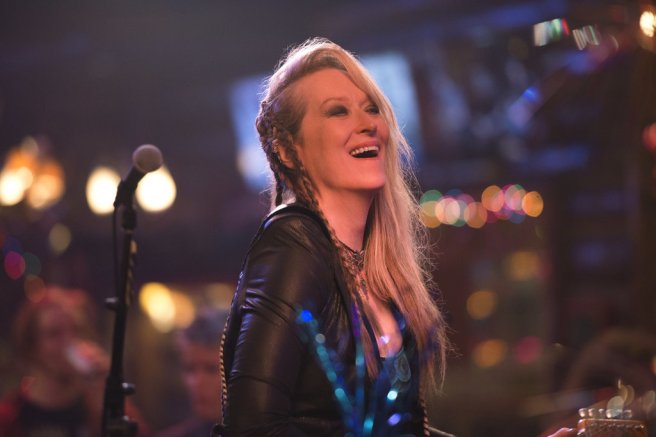 Meryl Streep’s joie de vivre is undeniable. She throws herself into the roles she chooses with thoroughness and vigor, and even in her more serious roles, she seems to perform with a kind of joy that’s always flowing just under the surface. One feels she truly loves her craft, and no matter the role, she’s in it, with all her heart. And she’s good, of course. The best, maybe. Everybody knows that. She can play it camp, she can play it serious, she can play it comic. She’s a master of voices and tones, on screen and off screen, big roles and small (my children and I love her superb narration of the Kevin Henkes’s picture book, Chrysanthemum). And she sings, too, with that same mastery and joy we see in her acting. Her early training, as she told Terry Gross on Fresh Air in 2012, included opera, and she’s proved her vocal quality and her skill in musical performance in films like Postcards from the Edge, A Prairie Home Companion, Mamma Mia!, and Into the Woods. Never mind her acting, I’d go to a concert just to hear Meryl Streep sing.

And that’s a lot of what we get in Jonathan Demme’s latest film, Ricki and the Flash: a Meryl Streep concert film, featuring full length, live performance songs, where Streep not only sings but plays guitar, and she performs with professional musicians: Rick Springfield, Rick Rosas, Joe Vitale, and Bernie Worrell.  Extraordinarily, she seems like one of them. It’s unfortunate perhaps, then, that the film isn’t fully a concert film, that it’s not a kind of fictional version of the documentary concert films Demme made early in his career – Stop Making Sense (1984) – and has made within the past decade or so: Enzo Avitabile: Music Life (2012); Kenny Chesney: Unstaged (2012); and a trio of Neil Young films, Neil Young: Heart of Gold (2006), Trunk Show (2009), Neil Young Journeys (2012). It’d be an odd concert film, to be sure – an actress playing and singing cover songs with professional musicians in front of a fictional audience comprised of a collection of extras – but that sort of film is possible; it’s very close, for example, to what Robert Altman did so delightfully with Streep, a part of an ensemble cast, in A Prairie Home Companion. Demme, surely, could do something in the same vein, particularly if he had the caliber of musical performers he has in Ricki. I’d like to see it.

Demme, however, using Diablo Cody’s script, takes a more traditional route and, while his concert film interests are clear, he returns to the kinds of themes, story, and characters of his 2008 film, Rachel Getting Married. Like the more successful Rachel, Ricki and the Flash is intended as an intimate and complex family drama, this time with an estranged mother, Ricki (Meryl Streep) – instead of the alienated sister of the bride in Rachel – returning to her family, her ex-husband and children, and finding that the rifts and sins of the past are not so easily forgotten and remedied. We learn early in the film that many years previous to where the film’s story begins, Ricki left her husband, Pete (Kevin Kline), and their three children for a career in music, returning for visits only on an increasingly intermittent basis, and the film opens with a full song from Ricki and her band, the Flash, playing in their apparently permanent, if unglamorous, venue, a bar in L.A., which hosts a hodgepodge of enthusiastic regulars, eager for cover songs from artists ranging from U2 to Lady Gaga.  When Ricki receives a phone call from her ex-husband, asking for help with their daughter, Julie (Mamie Gummer – Streep’s real-life daughter), depressed after being abandoned by her new husband, Ricki heads out to Indianapolis on her last dime, and it’s there that the family drama begins.

Or it should have begun. While Rachel Getting Married builds a genuine sense of prickly intimacy among its family members and our sense of the history of the relationships slowly builds into a fully formed idea of the family and its members, Ricki and the Flash relies on shortcuts – bits of too obvious dialogue, clichéd moments (yes, there’s a Ricki-finds-the-hidden-pot scene and the estranged family members bond over a drug-induced high and a collective fit of the munchies), or quirks of costuming – to reveal the characters and the story, and from the beginning, nearly everything relating to the family drama has a hollow ring.

One example of a shortcut, indicative of the film’s approach to story and character, rests in Julie’s unkempt hair.  To demonstrate Julie’s depression, the hair and make-up department teased her hair into an obviously faux and impossibly towering tangle, and when we first meet her, her hair takes center stage.  Puzzlingly, the hair is meant to serve both as a hilarious punchline (the film highlights its ridiculousness on at least two occasions – beat, beat, crazy hair!, cue laughter!) and as an indication of Julie’s troubling self-harming behaviors, behaviors which are then supposed to serve as sobering steps in Ricki’s character arc. Ricki is set up in the film to come to a realization of the real trauma her children may be suffering or may have suffered while she was absent, and her subsequent actions and feelings based on that new knowledge (are supposed to) drive the film.  If Julie’s trauma, however, never really feels real – and it doesn’t – then it’s difficult to follow where the story wants to take us with Ricki’s development.

The lazy characterization of Julie, unfortunately, is only one of many such shortcuts that undermine any deep emotional connection to the drama as it plays out between the family’s characters: between Ricki and Julie; Ricki and Pete; Ricki and Pete’s second wife, Maureen; Ricki and her other two children.  When Maureen makes her delicious, signature brioche French toast for family, we see the script, with a flashing red arrow, highlighting Ricki’s felt inadequacies. When it is revealed that one of Ricki and Pete’s sons is gay, and Ricki is surprised, it feels like a cheap way to heighten the drama and to underscore just how out of touch Ricki is.  When the otherwise apparently courteous Maureen insists on talking to Ricki while Ricki is wrapped only in a towel, even after Ricki protests, the scene betrays itself as a too obvious attempt to showcase Ricki’s vulnerability. And the list of similar, hollowly obvious scenes could go on.

Demme has made superb concert films, and he made a strongly compelling family drama in Rachel Getting Married, so it’s difficult to pinpoint exactly why this film, a merging of his two interests, so thoroughly fails to work. It’s not impossible for the scenes described above to be effective, but there’s something about them that contain a sitcom quality, a quality that undermines the clear effort at a serious, deep-cutting drama. We could, perhaps, say that Diablo Cody’s script is too close to the beat-punchline-beat-punchline dynamic of something like Juno (2007) and not close enough to her more subtle and much more uncomfortably authentic Young Adult (2011). But wherever the exact fault lies, this film does not represent the best of Demme. It doesn’t even come close to reaching the depths of emotion or the complex characterization of Rachel Getting Married, and it suffers against the close comparisons we could make to that film.

The best moments in Ricki and the Flash are wholly separate from the larger family drama and reside between Streep and Springfield. While Streep, in spite of the acting proficiency we know and love her for, often pushes her performance a little too far (she tries a too hard at times to play the tough, aging, failed rock star) and while her relative inexperience with the guitar shows (she does not seem wholly comfortable with it), Springfield’s much quieter, naturalistic performance is uniformly good, carrying a depth that Streep’s does not always do and grounding the scenes in which they are together. But when Streep’s performance is on, it’s really on, and with her marvelous vocals and her charismatic ease in front of the concert camera, she and Springfield together make for a riveting musical duo. The film is worth it, then, if only for the fictional Meryl Streep-Rick Springfield concert film we glimpse it as: for both performers, in their element, are a joy to watch, and Demme gives them spaces – peppered throughout the film – to do it.