The most ambitious film so far from the great director Jia Zhangke, working in a gorgeous, cyclical structure that it might make it too easy to disregard the film’s more provocative aspects. Jia has been obsessed with the globalization of China since day one, but what is different here is the syphoning of aspects of contemporary China into three broken segments, each of which purport to be a narrative-driven family melodrama. But what seems youthful naivete is rather the fading of a culture, what seems disillusionment of middle-age is the economic collapse of the world we live in today. . . so the earnestness of the film’s final third is the only response possible to the removal of culture entirely. Jia’s 2025 is a fairy-tale world, a complete fantasy wherein this (actually very conventional) three-act structure, surrealism is fully integrated into this narrative sense. And because of the disparity between this part and the first two, this approach disconcerts rather than shocks or provokes. The movie is a series of Brechtian devices which exhaust themselves, and so the only option left is to wear its heart on its sleeve.

The movie opens on New Years’ Eve 1999, with my favorite opening shot of the year. . . .but it’s not the joyful dancing which is important, but the parades: a celebration of deities and ancestors. Jia, one of the most intelligent directors working today, films parts of these sequences on 90’s-era video, emphasizing that even with the clarity of the digital in the 4:3 frame, these moments are past. It’s in these early sequences that the film seems at its most formally adventurous, occasionally bursting into laboured abstraction to mirror the confusion and emotional intensity of these youths in a love triangle. This triangle is quite simple: A woman, a poor man, and a rich man. One could surmise that this relationship is allegorical, especially in regards to the poor man’s deference to tradition and the rich man’s economic progressiveness: the old being systematically drowned out for the new, especially in regards to Zhao Tao ending up with the wealthier of the two. But this reading disregards a key component of the film, in fact the films key figure: Zhao Tao herself. Neither man is willing to let Zhao make her own decision, both only desire to possess her. So in this sense Zhao’s sporadic weaving in and out of the narrative reveal both tradition and capitalism stifling femininity. In a key moment, Zhao finds dynamite in the wealthy man’s car, ostensibly to blow up the poor man. Instinctively, she decides to blow up the dynamite herself, and this absurdist motif suddenly becomes an expressive one, releasing the psyche so being oppressed. There’s much to be admired here in Jia’s formal apparatus; shots are composed so that where there is open space in one shot, it will be filled in the the next. Cuts are timed, close to perfection where one feels a cut could have only come at that singular given moment: there are true meetings of eyes. In films today there often is an overload of cuts designed solely for the purpose of unfettered sensory reaction, or there is the opposite, the silliness of the long-take aesthetic and its manipulations of sensing real time. It is a rare treat to see such rhythmic precision.

Segment Two, set in 2014, is perhaps the most accessible of the three in its emotional directness, yet is equal in sociological potency. Liang, the one with less money, opens the segment in another key shot of the film: a group photo with his fellow workers. There is an enormous age disparity; Liang, now in his early to mid-30s is miles away from his wrinkled, white haired partners. Part One gave us the removal of tradition, Part Two gives us the removal of proletarianism. Liang is now a migrant worker with wife and child; he loses his job and returns back to the mainland to his old house, now an abandoned apartment. Spaces repeat and so do objects and people: we see a young boy carrying a staff now 15 years older, we see the wedding invitation to Zhao’s wedding sitting exactly where she had left it. More than either section does this sequence work on primarily emotional levels, though repetition is still key: two pop songs appear on the soundtrack, “Go West” by the Pet Shop Boys and “Take Care” by Sally Yeh. Both occupy extremely important meanings in the film: for the former, the title says it all. The theme of Western Expansion (or is it Eastern Abridgement?) make clear its connotation to the film. We do not hear it in this section of the film, but we will hear it twice in the first, and once more in the last. It opens the film, and in an ingenious touch, appears moments after Zhao decides to marry the wealthier of the two, Jinsheng. However, it’s “Take Care” which has precedence over this segment. Zhao’s young son, nicknamed “Dollar,” returns to see his Grandfather’s funeral. Or rather, he is called back by his mother. They don’t speak the same language, nor can he recognize the traditions of his grandfather. But this song, heard earlier in the film almost haphazardly, reappears as mother tries one last chance to connect with her son. “You and I are fated to be apart,” she says. “The slow train gives me more time with you,” she responds, when asked why they are not taking a plane. This song shall repeat once more. 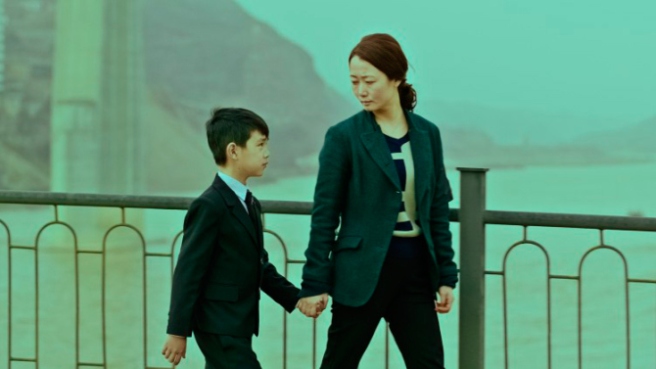 We enter the narratively abstract final third of the film, set in 2025 in Australia. Welcome to Jia’s fantasy-nightmare of the future, where other than the futuristic phones, bears considerable resemblance to the world of 2015. Gone is the intimacy of the 1.33:1 frame of the first segment, spaces are now wider, more obstinate, 2:35 gives us more space for emptiness. The son of Zhao and Jinsheng is now in his early 20’s, professing that he doesn’t remember who his mother is and pridefully exclaiming his name is Dollar in public, but sulking, confused and desperate in private. It’s amusing that many criticize this section of the film, because this is the one which resembles Jia’s prior work the most. Dollar can’t speak a word of Mandarin, and in fact studies it in school as though an ancient language. In school his professor (Sylvia Chang, almost as good as Zhao Tao here) plays records from the 90s, for study. And “Take Care” returns. This musical interlude stymies a breakdown in Dollar, rejecting both his father and capitalism, and in a Freudian touch begins a relationship with his older professor. . . .the woman who played him the song his mother played him. Dollar resolves to work his way back to his mother, work his way back to humanity, while Chinese tradition & proletarianism remain a distant ghost. And perhaps because of this repetition of persons, objects and sounds we ignore the film going full circle. We begin in the winter of New Year’s 1999 and in a 25 year span cycle through spring, summer, autumn and finally winter again. Returning to Zhao in the mainland, we do not see her and Dollar reunite. Zhao thinks she hears him but he isn’t there. But the last time we see Dollar he is staring into a skyline…and then in the film’s final shot Zhao goes outside and dances to “Go West”, playing as firmly in her memory as it did on the New Year’s Eve of 1999. There are two possibilities here: one pessimistic and one optimistic. The former: by the simple fact of playing “Go West”, Jia infers a total end of China in the future. The latter: un-contextually “Go West” is a song that Zhao simply loves, love itself being something she has longed for the entire film. And by dance she reveals the joy she once had in the opening shot. And Dollar’s looking at the sky infers another possibility: he will return. So this ending is intensely moving to me. IF a mother and a son who furthermore cannot even remember his mother’s name be reconciled, why can’t a culture be reconciled with its history? We need history, the past must always be acknowledged. . .so that the sinister cycles of man’s creation cannot repeat themselves again and again.