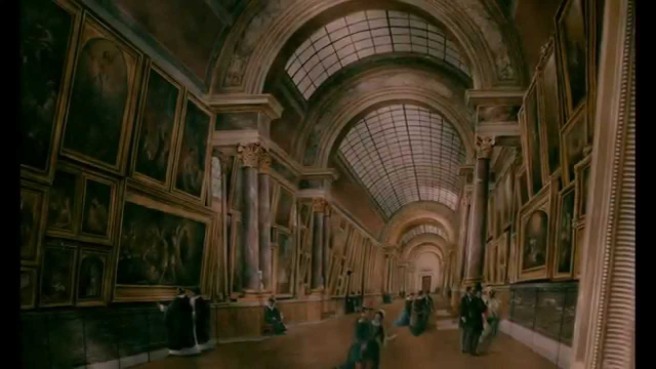 Playing for the next two weeks at the SIFF Uptown is Russian director Alexander Sokurov’s look at The Louvre, a companion piece to what remains his most well-known film in this country, 2002’s Russian Ark. That film, shot in an elaborate and still impressive single-take, weaved through The Hermitage, the museum in St. Petersburg, crossing seamlessly through Russia’s past and present, a guided tour of the fluidity of culture and the ways art, and our collections of art, keep the past alive into the future. Francofonia is no less thematically ambitious, though the single-take approach is abandoned in favor of more conventional shifts between documentary-style glides through the galleries, dramatic recreations, and meta making-of looks at those recreations. The film is framed with a film director (Sokurov himself) in the editing stage of the movie we’re watching, attempting to talk to a ship’s captain caught in a storm at sea (Captain Dirk, seriously). The ship is apparently transporting precious works of art, an extension of the final image of Russian Ark, with the museum as a ship floating in seas of time. Captain Dirk has a bad Skype connection, so the director ruminates about the museum itself, covering, in somewhat random order, its founding as an anti-Viking fortress, its various expansions and decorations, its transformation into a museum filled with the spoils of imperialism and finally its modern state. Taking up the bulk of the film is the story of how the museum’s director (Jacques Jaujard) and the Nazi in charge of cultural artifacts (Franz Wolff-Metternich) kept the collection safe and out of Hitler’s hands during the Second World War. 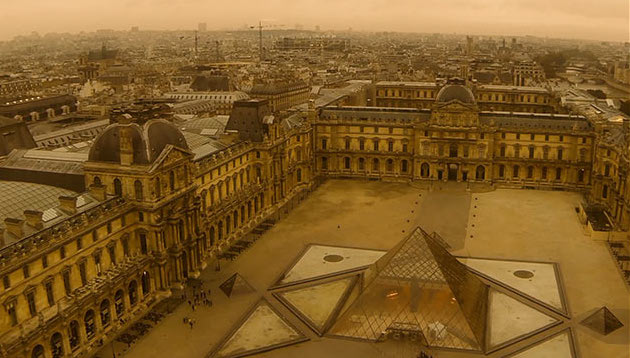 This story is mostly told in voiceover, with Sokurov narrating while the actors try their best to not look like they’re working for The History Channel. Most of the footage we see is projected as it would be for an editor, complete with the soundtrack running down the left side of the screen, with clapboards and occasionally pans around that reveal the crew and lighting. These scenes are intercut with first-person wanderings through the museum, where Sokurov’s voice speaks with two other actors, one a woman playing a ghost or spirit (I think) and another playing Napoleon. Bonaparte is the funniest thing in the film, naturally enough. He’s vexed at the Prussians who appear to be in his museum (the Nazis from the recreation) and he loves standing by the great paintings and declaring “It’s me” like a megalomaniacal twitter meme. A comprehensive look at the museum and its history is of course impossible, so Sokurov focuses on the areas that interest him most: a collection of Assyrian artifacts, a 9,000 year old sculpture of a human figure from the Jordanian desert, paintings of the museum itself, of people touring its galleries and observing its works, a myriad of human faces in portrait. This latter section inspires the film’s most fascinating rumination, as he speculates about what he (incorrectly) deems a uniquely European obsession with portraiture, and whether our ability to see what people look like hundreds of years ago changes our view of ourselves. 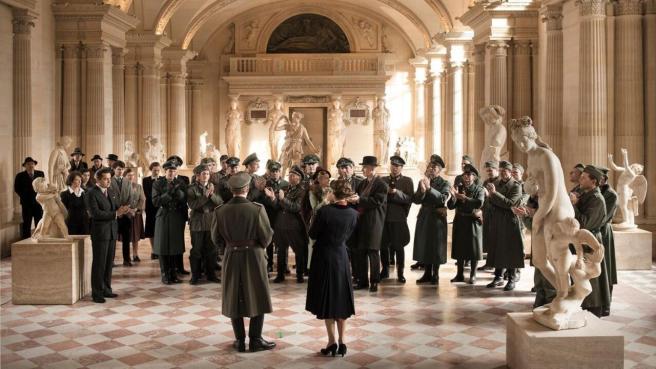 A more pessimistic film than Russian Ark, Francofonia portends doom for Captain Dirk’s ship of art, lost at sea, while at the same time celebrating Jaujard and Metternich’s rescue of that same ship during the museum’s darkest hour. Despite this, and the success and fame that followed after the war, the future doesn’t seem all that great for our heroes. Jaujard will become Minister of Culture and be awarded the Legion of Honor (twice), and Metternich will live a long life surrounded by a large family. But still, as Sokurov tells the unbelieving actors playing these figures, “I am unable to find anyone alive who can say anything about you.” It’s unclear exactly why Sokurov is so depressed about the future of the museum and it’s unclear if Captain Dirk has any function beyond his clumsily metaphorical existence. Francofonia doesn’t have the dramatic scope of its predecessor, with its cast of thousands bringing to life a history filled with dark horrors and vibrant parties and amazing costumes. The new film is more intimate, but not more personal. Russian Ark was a work of art to rival the masterpieces housed in its subject museum, Francofonia is an occasionally clever and moving riff on some of the stuff one might find or think about at The Louvre.

One thought on “Francofonia (Alexander Sokurov, 2015)”