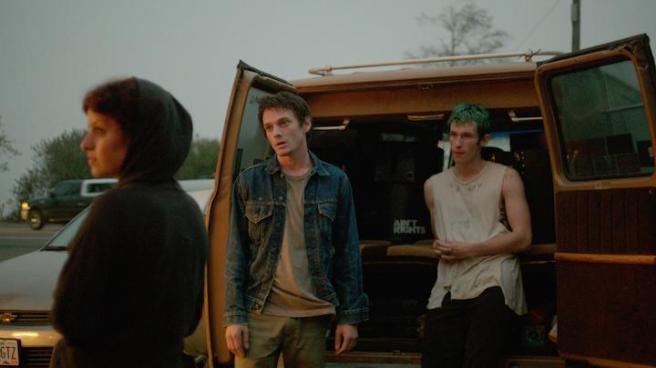 How does one make a zombie film scarier? One option is to swap out the undead for the more earthbound terrors of pit bulls and neo-Nazis. Director Jeremy Saulnier takes this approach with the grisly thriller Green Room, the follow-up to his other movie from the color spectrum, the acclaimed indie Blue Ruin.

Green Room follows punk band The Ain’t Rights, an idealistic yet desperate quartet on the verge of canceling their tour when they get thrown on a last-minute bill at a remote venue. It turns out the show is being held at a backwoods compound for a gang of white supremacists, a warehouse full of shaved heads and swastika tattoos. Saulnier, who also wrote the screenplay, accurately depicts these two very real sects of the punk rock scene, both of which sprung from the same well of pent-up aggression before splintering into contentious factions anathema to one another.

The opening section, which follows the band before they arrive at the fateful show, captures many of the hallmarks of being on the road with your friends playing music for a half dozen weirdos and making just a few dollars to get to the next town. Saulnier doesn’t just use a well-placed Fugazi sticker to represent this underground world, he puts the band in real situations, like falling asleep at the wheel between cities and getting drunk on cheap beer in random apartments. Frankly, this section could have gone on much longer. It’s just as much fun to ride shotgun in their van, than it is to wield a shotgun later. 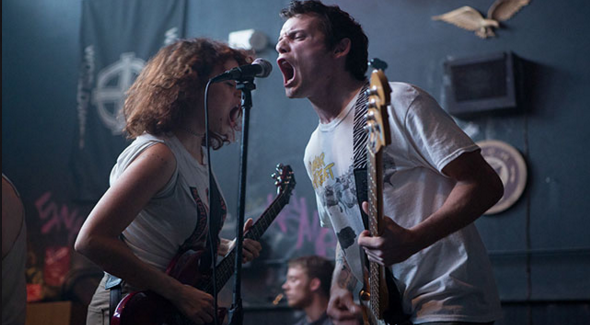 The clash between the liberal band and the skinheads starts with an act of courageous–if misguided–antagonism, before a sinister deed is uncovered that sets their converging paths toward irrevocable destruction. The less divulged about where these paths lead, the better. It is best to go into Green Room cold, accompanied by a strong stomach. The characters are put into extreme situations and Saulnier doesn’t flinch when depicting the consequences. This is not fetishized Tarantino violence, with its slow-motion displays and operatic gestures. It is quick and painful, uncomfortably gruesome. Despite how ridiculous elements of the story get, especially as it draws to its conclusion, this adherence to the blunt brutality leaves one perversely rapt. It is a fascination with the futile. Which is kind of what makes punk rock itself so endurable. We’re all fucked, but we might as well do something anyway.