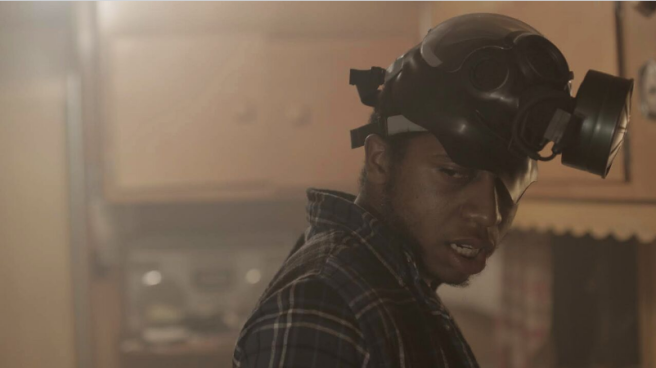 The Alchemist Cookbook is like The Martian if Matt Damon was living in a rusty trailer deep in the Michigan woods and he decided to pseudo-science the shit out of spare cleaning chemicals because he wasn’t smart, just insane. Call it The Michiganian. The Martian was a clarion call for humanity’s aspirational best. The Alchemist Cookbook is the sobering reality that 99% of us would quickly go nuts if left to our own devices.

From the get-go it is apparent star Ty Hickson’s Sean is not quite right. The first dozen scenes showing his lonesome life in the forest divulge a physical ailment and a steady stream of prescription pills. Early on, Sean is rocking out in his trailer’s kitchen, dancing around to the Smoking Popes song “Run Away” and it is clear he has taken the lyrics quite literally. He has completely left society behind, spending his days chopping wood and his evenings taunting a demon he believes is following him. His only contact with the world comes from the infrequent visits of his cousin Cortez, a schemer who proudly announces he got a job at strip club and wants to celebrate by watching a Schwarzenegger double feature on VHS.

Writer-director Joel Potrykus has defined himself by a post-modern thrift store aesthetic reminiscent of the early work of director Steve Hanft. The loser of Hanft’s debut feature Kill the Moonlight is cut from the same dollar store cloth that birthed the character studies of both The Alchemist Cookbook and Potrykus’s previous film, Buzzard. These are misguided outcasts living in lo-fi America, a bubbling cauldron of outsider music, salty snack treats, and Satan.

However, where Buzzard repeatedly found humor in the silly scams of its slacker protagonist, The Alchemist Cookbook goes to places far more sad and sinister. Sean is a damaged man, a tragic Rumplestiltskin who thinks he can cook chemicals into gold. But his dreams of glory consist of him remaining in the woods, all alone save for his cat. He is not waging war with society but with himself. He is fighting demons that he all too literally manifests. As Sean delves deeper into his personal hell, it is apparent that not only is there no turning back but that this world he inhabits is a circle, a closed loop. Redemption was never an option.