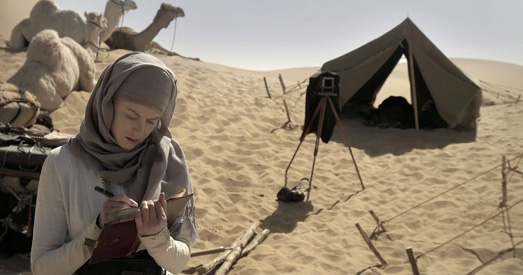 Werner Herzog’s biopic of British archeologist Gertrude Bell premiered more than two years ago at the Berlin Film Festival to poor reviews, and is only this week making its way onto American screens. Why this should be is not immediately clear, the ins and outs of which international art house films make it into domestic distribution is far too complex a matter for my mind to comprehend, but I believe it involves some combination of corporate nepotism, the star system and random chance. The stars in this case are what make the film worth watching, as Nicole Kidman can enliven even the deadest of features, and this might be her most heroic effort in that vein to date. There’s almost nothing of Werner Herzog in the film, though there might have been once: Bell superficially appears to be his kind of a hero, obsessed with a harsh landscape, driven outside the bounds of society to do something remarkable, but at nearly every level the film feels compromised. Herzog is the only credited writer, but this has all the hallmarks of a film written and edited by a committee. 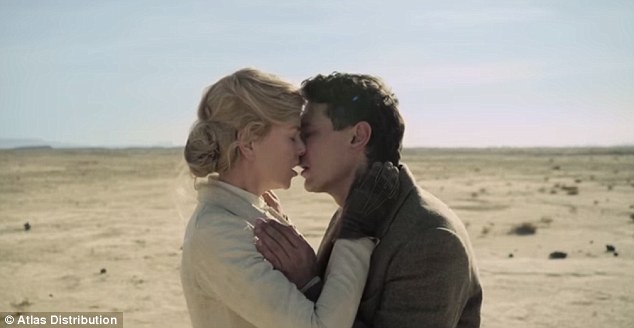 Gertrude Bell was the daughter of a wealthy late-Victorian family who, educated at Oxford, made her way to the Middle East, where she spent more than 20 years traveling through and chronicling the desert and its people, earning the lasting respect of the region’s Bedouins in particular. An archeologist and an ethnographer, her knowledge of the land and its people proved vital to the British support of the Arab Revolt against the Ottoman Empire during World War I, of which T. E. Lawrence is the more famous cinematic hero (he’s played here, briefly but well, by Robert Pattinson). She was a key advisor in the post-war partition of the Arab world that lead to the modern states of Jordan, Iraq, Syria and Saudi Arabia, negotiations fraught with intrigue, suspense and dramatic turns, all of which are absent from Herzog’s film.

Instead, the Bell we see is driven into the desert by romantic failure. First to Persia after failing to find a man in England her can match wits with her, then to Arabia after the man she does find (James Franco) proves unsuitable (according to her father) and then mysteriously dies. It says something about Franco’s performance that one has no idea whether or not he’s sincere in his pursuit of Kidman: I kept expecting to learn that he’d faked his death. But no, apparently their love was pure and its failure haunted her for the rest of her life. Sigh.

Any hope for a kind of Herzogian perversity or weirdness is for naught, the film follows a banal episodic pattern: Kidman travels through the desert, meets some people everyone else fears, then she strides boldly forward and makes a new friend. As a document of one of the world’s preeminent Orientalists, the film can’t help but mystify and idealize the Arab world. There are plenty of gorgeous shots of arid landscapes, poetry from Omar Khayyam, and Fear Factorish hints of goat’s head meals (twice!) which are nonetheless tastefully not depicted on-screen. An animated map shows Bell’s travels, but it’s sloppily cut together (one shot of a journey from Damascus to Petra (weirdly depicted as a state-sized region rather than a city or archeological site) is repeated twice in a five minute span, despite Bell not having returned to Damascus or arrived yet at Petra in the interim). None of the Arabs Bell meets are allowed to do much of anything but be awed at her greatness, and so neither are we. A greater emphasis on the maneuverings of the post-war negotiations might have alleviated that, complicating Bell’s impact on the Middle East (in many ways the conference is a primary cause of the region’s present instability, something Bell herself anticipated). But that’s a more difficult and far less romantic story to tell. It would require a filmmaker willing to explore the nuances and contradictions of human relations. But that’s never been Werner Herzog’s metier: interpersonal communication doesn’t seem to interest him as much as humanity’s (or more specifically, an individual’s) relation to the natural world. You can see that that’s what drew him to this project, his own stab at Lawrence of Arabia. But Lawrence was the Herzogian lunatic here. Gertrude Bell was far too sensible for him. And so what he gave us is garbled and dull, half-hearted assertions of romance coupled with superficial assertions of colonialist mystique. And despite all that, Kidman almost makes it all work.