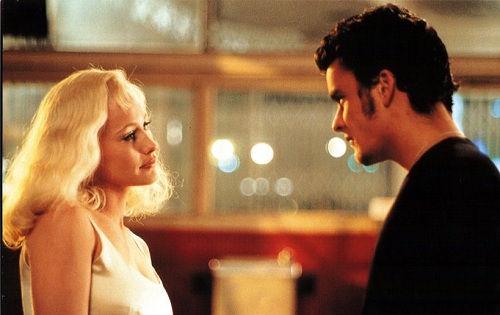 The following is adapted from a review I wrote back in 2007 for a David Lynch Blog-athon.

Bill Pullman plays a saxophonist who kills his wife (Patricia Arquette) because she was apparently cheating on him, and is so guilty over the murder that while in prison he goes insane and creates another reality for himself, one in which he’s a young mechanic (Balthazar Getty). Pullman’s fantasy world is something out of the 50s or early 60s of American Graffiti, with its car obsessions, pleasant suburban family, and the cute girl next door (Natasha Gregson Wagner). Unfortunately for Pullman, his subconscious won’t quite let him forget his crime, and soon Getty’s hanging around with a gangster (Robert Loggia) and his femme fatale girl (Arquette again). As in a typical film noir, Getty falls for the bad girl, conspires with her to commit some crimes (including a murder or two) and comes to a bad end.

It’s the elements of the noir genre that save the film from becoming another Lynchian disaster (note: I was not a Lynch fan at the time I wrote this. I’ve since wised up). While the film has more than its share of weird, seemingly inexplicable imagery and dialogue (not to mention Robert Blake), the genre grounds the film in a familiar structure that gives the viewer a basis for attempting to understand what the hell is going on. At the same time, genre does nothing to limit the virtues of Lynch’s non-linear, dreamlike style. The flashback, circular structure of a narrative about a doomed man is an essential feature of film noir (see Sunset Boulevard, Out Of The Past, Detour, Double Indemnity, etc) and Lost Highway is structured like a Möbius strip, coiling back on itself in a way that reflects the disturbed consciousness of the protagonist, condemned to replay the tragic events of his life in an endless loop. Occasionally the film cuts to a blurred image of what appears to be Pullman shaking his head and screaming, to me looking like Pullman in the electric chair, apparently referencing Ambrose Bierce’s An Occurrence At Owl Creek Bridge, in which a convict about to be hanged imagines an entire last minute escape and flight home in the microseconds before his death. Thus the entire second narrative of Lost Highway (and probably the first too) occurs in the final instants of Pullman’s mind.

So, what we have in Lost Highway is a film noir in which the protagonist, in order to escape his past (the goal of many a noir hero) invents a world in which he’s the protagonist of a 50s sitcom, but gradually his invented world becomes infected by noir, until he’s just a sap in yet another noir story. Like the film’s characters and structure, the subtexts and possible interpretations of Lost Highway circle back on themselves. The medium itself is an essential motif in the film, not only in its generic characteristics and references, but also as an object that twice sets the film’s crimes in motion. In Getty’s story, pornographic films starring Arquette lead directly to murder. In Pullman’s story, his happy home is disturbed by the appearance of anonymous videotapes made by someone prowling about his house. It is unclear where the videotapes come from or what purpose they serve. My theory is that the entire early section of the film is another dream by Pullman. The film is in fact two dream realities conjured by the same murderer, two scenarios in which he tries to imagine away his crime. The circle is neverending; where Getty’s story ends, Pullman’s begins, and vice versa. In this interpretation, the videotapes are, like the noir plotline of the Getty narrative or the personification of Evil played by Robert Blake, interruptions of Pullman’s dreamstate by his conscious mind (conscience mind?). Like alcohol, film is the cause of, and solution to, all of life’s problems.