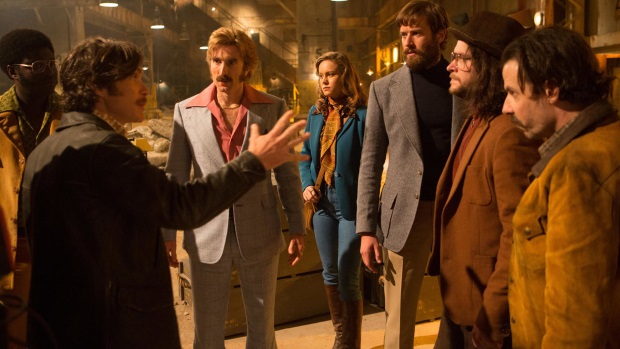 Ben Wheatley’s Free Fire is as pointless an exercise in nihilistic violence as Seattle Screens have seen in some time. For some reason it’s set in the late 1970s, as a representative of the IRA played by Cillian Murphy (The Wind that Shakes the Barley) attempts to buy machine guys at an abandoned factory in Boston. The deal has been put together by Brie Larson (Room) and Armie Hammer (The Lone Ranger), the latter unrecognizable in turtleneck and beard. The dealer is South African actor Sharlto Copley (Chappie), leading a gang of ruffians, one of whom got in a fight with one of Murphy’s gang of ruffians the night before. When the two men recognize each other, they begin fighting, someone pulls a gun and soon the two sides are, as they say, freely firing at each other. Later some other people will show up and start shooting at everyone, but no one, apparently, knows why. One person will survive, of course, but it doesn’t matter who, or why, or for how long, though the final shot manages the unique feat of cribbing from both Reservoirs Dogs and The 400 Blows.

It’s all mostly played for laughs, and the movie is funny, thanks more to the energy of the actors than the script by Wheatley and Amy Jump. But unlike similarly nihilist Korean actioners like Kim Seonghun’s A Hard Day, Kim Jeewoon’s A Bittersweet Life or even Shim Sungbo’s Haemoo, there’s no sense of inevitability to the unfolding chaos, no vision of a world made unavoidably irredeemable by basic human cruelty, doom unfolding with absurd, yet clockwork precision. The world of Free Fire is entirely random: people live or die by chance, effects have no cause, there’s literally no reason for anything that happens, from the gunfight itself to the fact that the movie is set in the 70s, which appears to be simply an excuse to raid the leftover wigs and wardrobe from American Hustle. The most chaotic element in the film is Wheatley’s blithe disregard for the coherence of his visual space, a directorial decision of either total incompetence (how do you have a movie that is essentially one long shootout in an enclosed space and never give the audience a basic understanding of the arrangement of the principals and their environment?) or admirable perversity. I haven’t seen any of his other work, so I suppose both answers are possible explanations, or that he truly believes in nothing, but it strikes me as simple laziness, the work of a filmmaker content to coast on the surface of style, with nothing of actual interest to say about anything. But, I LOLed.