And the women all were beautiful
And the men stood
straight and strong
They offered life in sacrifice
So that others could go on.

Hate was just a legend
And war was never known
The people worked together
And they lifted many stones.

They carried them
to the flatlands
And they died along the way
But they built up
with their bare hands
What we still can’t do today.

And I know she’s living there
And she loves me to this day
I still can’t remember when
Or how I lost my way.

He came dancing across the water
Cortez, Cortez
What a killer.

James Gray’s adaptation of the story of early 20th Century British explorer Percy Fawcett, based on a New Yorker article and subsequent book by David Grann, is as beguiling, beautiful and ultimately confounding as the Amazonian jungle in which it is largely set. Shot on actual film by the great Darius Khondji (Seven, My Blueberry Nights) the film has a granular opulence rarely seen in the Hollywood cinema today, lush details of both the rain forest wilderness and the rich dark warmth of the woods and leathers of English libraries that are overwhelmingly tactile and mesmerizingly immersive, which, combined with the film’s languorously fluvial pacing washes away all the gaps and inconsitencies and oddities in the screenplay, leaving only the impression of the grace and tragedy of the human impulse toward transcendence. 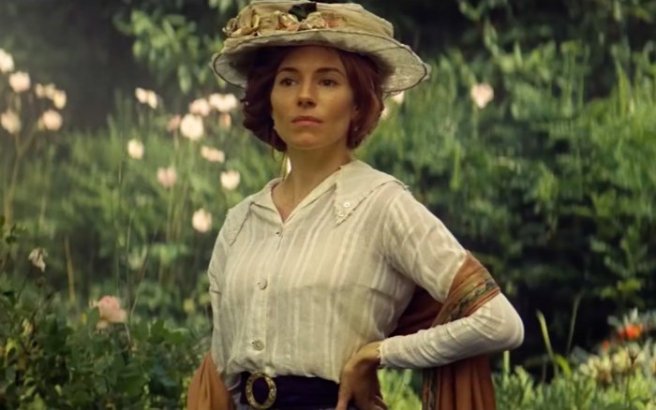 I’ve been wrestling with the film for days now, and I keep getting sidetracked by nitpickery, by the narrative shortcuts and elisions Gray has made to shrink this metaphysical epic down to a mere two and a half hours: Fawcett’s sudden obsession with archeology (Charlie Hunnam’s performance is fine I think, projecting a solid kind of masculinity we don’t see much of anymore, but he doesn’t ever sell Fawcett’s transformation over time: he is one thing, and then another, never two things at once); his apparent inability to rediscover the site of his lost city when it simply came at the end of the river he was mapping (the quality of said maps being his primary claim to fame); the awkward shoehorning in of family drama, from the vague hints of his father’s impropriety to his son’s alternately hostility and enthusiasm for his explorations and the basic silliness of Sienna Miller, in an excellent performance, insisting she be brought along on the trip; the utter lack of history or identity for Robert Pattinson’s Costin, a drunken mountain man or clubby member of the Royal Geographic Society, depending on whatever the scene calls for; the abrupt about-face of said society during a shockingly rambunctious meeting in which they spin from angrily denouncing Fawcett’s belief in the possibility of Amazonian civilization to giving him a standing ovation; blame for Fawcett’s failed second expedition (in fact there were several) is laid at the immense feet of a wealthy dilettante explorer played wheezily by Angus Macfadyen, a character not found in Grann’s article (he’s invented, I assume), because rich people are terrible, I guess?; of course that doesn’t apply to Ian McDiarmid, as Fawcett’s sponsor at the RGS, only in the British Empire is Palpatine the kindly old man; even the sideline in World War I is turned cliché for dramatic effect: Fawcett himself served in the artillery, not leading infantry charges across no-man’s land into a gas attack. But none of this really matters, does it?

Details aside, it’s a story about a man obsessed with the jungle, with treading into the unknown and bringing back something, a name for himself, certainly, but more importantly knowledge. All that other stuff is just window dressing for this quest, and the fact that the film is full of these mundane narrative contrivances and not some kind of feverish jungle epic like Apocalypse Now or Aguirre: the Wrath of God or Sorcerer is one of its great mysteries. Like Gray is trying to contain the madness of Fawcett’s quest in the everyday movements of Hollywood cinema, a project inevitably doomed to failure as moments of inexplicable grace and horror creep into the creaky narrative.

And in the end, I don’t know that Gray really captures the full wonder and mystery of Fawcett’s story. He gives him William Blake’s ending from Dead Man, but he hasn’t earned it, as Jarmusch does with Blake’s increasingly opaque travels through hell or the remarkable destabilizing power of Gary Farmer’s performance as Nobody, the pragmatic Indian guide that counters the spiritualist mumbo-jumbo version of the Indian. Gray just gives us the noble savage, in line probably with Fawcett’s vision of the Amazon, which, while marginally more scientific than the rabid old racists of the RGS, was no doubt deluded. Setting aside the fact that Fawcett apparently believed any advanced civilization in the Americas must have ultimately had a European or at least Mediterranean origin, his belief in the beauty and simplicity of The Other (like the Wobegonesque narrator in the Neil Young song asserting that the Aztecs, of all people, never knew war) is as dehumanizing in its way as the belief in native inferiority espoused by conquistador and Victorian alike. Both are a failure to recognize other people as being as real as we ourselves are, as flawed and active subjects (yeah, I’m reading Tzvetan Todorov’s The Conquest of America right now). Searching all his life for the otherworldly past, Fawcett failed to find his city, though in fact its remains were all around him. Dancing across the water, he too lost his way. What a killer.