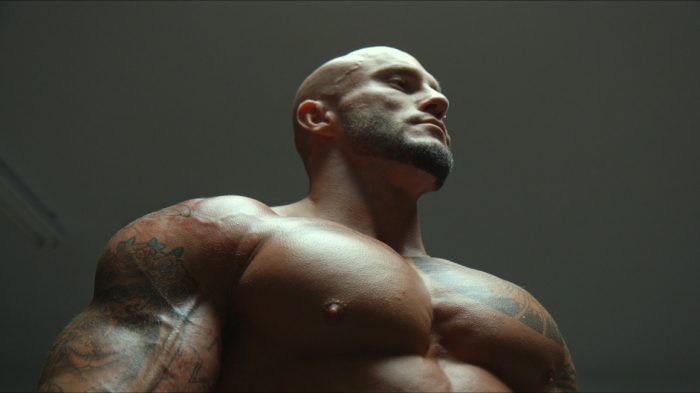 As a general stereotype, body types tend to fall within a particular range in most films, whether they be studio-crafted or independently made. Save for films dealing with a particular subject and milieu, it is rare to see on-screen characters with a significantly larger or significantly smaller physique than what is considered attractive at the time. Even so, the professional bodybuilders that make up the principal subjects of A Skin So Soft possess truly startling builds, their muscles not so much rippling as erupting from their bodies. Yet while the camera lingers over these almost alien protrusions, the documentary is less about the figures than the people beneath them; the ways they interact and present themselves in various states of training, parading, and existing.

The film – billed as a docufiction, though I didn’t spot any sections that seemed particularly staged – is structured around six Québécois bodybuilders of varying backgrounds, each training for a pageant competition in various methods. Much of the runtime is built on these training sections, on patiently observing these large men on their own personal missions to mold their bodies into desired outcomes. Director Denis Côté ensures that the pace never flags by jumping around between the men, but the most notable aspect of A Skin So Soft is its sense of humanity and compassion; though the bodybuilders are plainly unique and unusual, it is emphasized how ordinary and quotidian their existence is. One has a family to take care of, one juggles his bodybuilding with his wrestling career, the youngest of the athletes seems obsessed with VR – none of them are depicted with any hint of either deification or condescension. The documentary ends on an odd note, after the first time all six men have met on screen, but it scarcely seems to matter; it remains intently observant, almost loving, to the end.