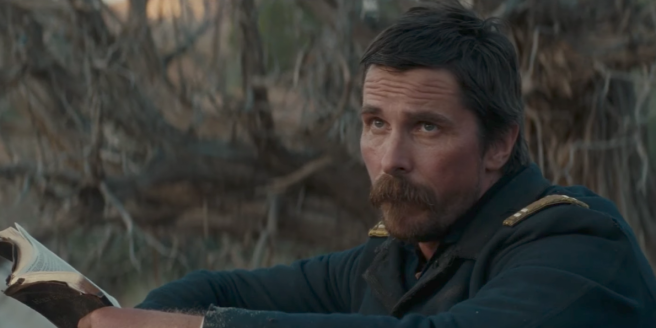 Scott Cooper’s Hostiles is sure to be in the running for the Most Acting of 2017 award. Ostensibly a Western, set in 1892 it’s the story of a aged cavalry officer tasked with escorting a cancer-ridden Cheyenne chief and his family from a reservation in New Mexico to their ancestral lands in Montana, but it’s more properly considered a historical fantasy, a translation of the therapeutic culture of the late 20th century onto events somewhat similar to those which transpired in our nation’s past. Notably not the 21st century though, as one would think the greater awareness of the politics of identity would have cautioned a filmmaker against creating a narrative of absolution for America that, while peopled with an impressive array of cultural representatives, is told entirely through the perspective of its white heroes.

The story is split in half, giving each side of the Indian Wars the chance to exorcise their violent past by killing a psychopathic member of their own group. Both killings take place off-camera, but pointedly the film opens with the brutal and tragic crimes committed by a crazed band of Comanches, and much of the film will be seen through the eyes of the lone survivor of that attack (an anguished Rosamund Pike). The white killer’s crime, though, happens before we ever meet him, and he becomes a fully-fleshed out character, complete with backstory and long dialogues with our hero (these mostly consist of the killer, Ben Foster, telling the hero, Christian Bale, how much they are the same while Bale looks thoughtfully into the distance through his impressive moustache). And much emoting. So much emoting. An early scene of Bale howling in the wilderness, plays like a parody of Terrence Malick. It’s exhausting.

Every generation, I suppose, feels the need to translate history into its own idiom, and ours is a time when every tragedy is not only deeply felt but every feeling is openly expressed. The pragmatic stoicism (and/or repression) of the pioneers and soldiers who settled The West doesn’t jive with our modern notions of acting in the cinema, but honestly reckoning with the sheer brutal terror of life during the Indian Wars requires more curiosity about how the people who lived through it actually behaved. Of course, this only applies to the white characters, who cry and scream and are astoundingly insubordinate when they aren’t mere contrivances, as in the appearance of Rapacious Capital and his men near the end of the film. The Cheyenne are given almost nothing to do but look alternately sad and noble. Hostiles boasts the greatest collection of Native American acting talent in a Hollywood film in years, with Wes Studi, Adam Beach and Q’orianka Kilcher, yet it can’t think of more than a few words for any of them to say. Their role is to humanize the white people, and to forgive them. And then they are no longer required: their future belongs to the establishment of the white family unit.