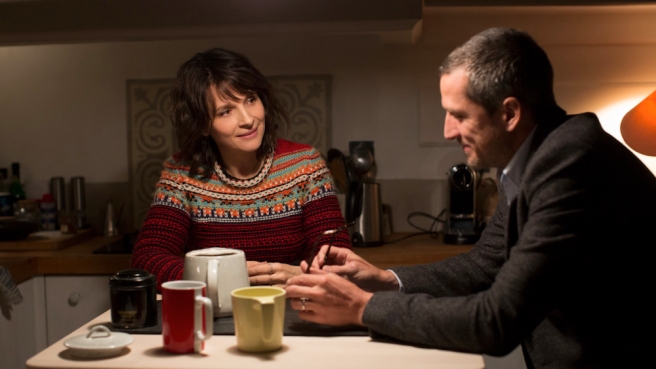 No one risks obsolescence quite like Olivier Assayas. Non-Fiction, née E-Book, finds him asking almost embarrassingly au courant questions about media consumption in the second decade of the 21st century: Is the written word dematerializing? Are tablets the new market leader? And who reads anymore, anyways? Pieces fretting over these issues likely pad your local Review of Books on the regular, and for a monthly publication, that’s to be expected: staying current is their currency. To craft a movie around such modish literary solipsism, on the other hand, is to flirt with, if not outright embrace, accelerated irrelevance; since the time pen hit paper for this review, the world has probably left Non-Fiction behind.

And Olivier Assayas is ok with that. The defining feature of his work, at least as far back as Irma Vep, and possibly before that, is a rare capacity for incarnating the spirit of sleek, globalized modernity—so corporate, and therefore resistant to corporeality—in specific places and people. Here it’s a cadre of bourgeois literary types: publishers, writers, journalists, the kind of people who casually recite poetry from memory or wring their hands over declining e-reader revenues. The comic roundelay that Assayas whips up for them is his generic response to the milieu: just as Anonymous Shinjuku Hotel, 2002 summons a thriller in the form of demonlover, these bed-hopping French intellectuals, with their book-lined homes and their seemingly inexhaustible fleet of iProducts, demand a mid-budget Juliette Binoche movie. Assayas obliges.

This fundamentally deliquescent approach to cinema (ambient particles are absorbed from the surrounding atmosphere and allowed to dissolve preconceived structures at will—something in the air?) exposes Assayas’s films to accusations of vapidity and faddishness, two demerits that Non-Fiction proudly flaunts. And to those Assayas adds a third: the vulgarity of auto-fiction, which, as the title suggests, shapes the film’s relationship with reality. Assayas mines his own life for the first time since Après mai, though his proximity to the events on screen has changed: unlike his youth films, Assayas maintains very little distance, temporal or otherwise, from the digestif debates and barbed audience Q&As that make up the bulk of Non-Fiction.

The narrow space between art and life at times suggests an Assayas variation on a Mia Hansen-Løve joint, though he lacks his former partner’s ability to supercharge everyday banalities with supple emotional texture. His work has always relied more on coups de cinema to do the heavy lifting (think Cold Water’s extended party scene, or the spontaneous combustion that concludes Irma Vep, or the vaporization of Kristen Stewart in Clouds of Sils Maria) and he arguably miscalculates by shearing Non-Fiction of any such sequences. The first shot—an unremarkable office door, an abrupt entrance, and the opening volley of the film’s endless, extempore gabbing—is more or less what the film has to offer. The more generous critics among us might point out that by so resolutely avoiding go-for-broke moments Assayas is, in fact, performing a high-wire cinematic act: just how long can he walk the tightrope with these navel gazers and their insufferable palaver? But the visual and emotional flatness, no matter how rigorously conceived, opens up avenues for less charitable criticism—and the film’s detractors will, in all likelihood, have a point. Assayas overestimates his facility with Non-Fiction’s bedroom farce antics, or, in the very least, he’s selected a less than ideal host to act as a carrier for his pet concerns; liquid modernity doesn’t flow naturally through most dinner party conversations. Though perhaps that’s why the final moments bring us into contact with a more essential, more ancient human experience, and abandon contemporaneity in favor of a durable truth that lies beneath all these couplings and decouplings, beyond modern capital’s distortion effects, and, possibly, at the heart Assayas’s shapeshifting art. To quote a print-to-digital transition specialist quoting Giuseppe Tomasi di Lampedusa: “For things to remain the same, everything must change.”

View all posts by Evan Morgan