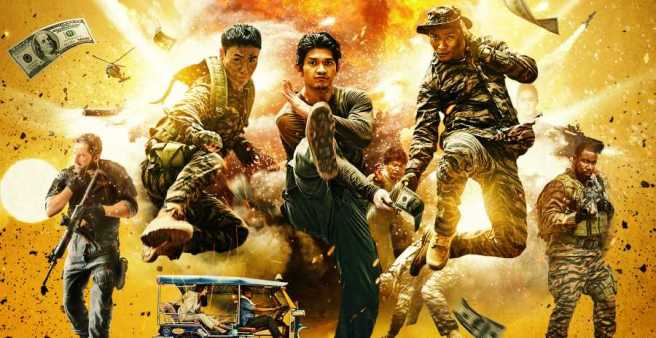 The second very fine action flick released by WellGo in two weeks, alongside the Vietnamese film Furie, Triple Threat for some reason played but one night only in theatres before making its way to VOD. That’s somewhat understandable, given its straight-to-video pedigree, with both director Jesse V. Johnson and star Scott Adkins being major SVOD stars. But one would hope the ridiculous stack of martial arts movie talent would have earned the film a broader release, or at least the chance not to get buried in the hype around Netflix’s similarly-titled Triple Frontier. As it is, Triple Threat is a major event for afficianados of filmic fisticuffs, featuring several of the greatest screen fighters of our time. Joining Adkins are Tony Jaa, Iko Uwais and Tiger Chen, along with Michael Jai White, Celina Jade and, just for kicks, none other than Michael Wong. It’s a blunt instrument of a movie, eschewing anything approaching character or theme in favor of simply throwing its stars into a generic plot and sitting back to watch them do their thing. The best thing you can say about Johnson’s direction is that he doesn’t get in the way.

Uwais, the Indonesian star of the Raid movies who had his talent memorably wasted in The Force Awakens, is the victim of a terrorist jailbreak in the Burmese jungle, where White and his band of mercenaries free Adkins from imprisonment. He tracks down Jaa and Chen, who had unwittingly aided the bad guys in navigating the jungle (their laughable but earnest excuse is that they thought they were on a humanitarian mission, apparently the most heavily-armed one in history), and the three join forces to take revenge. Meanwhile the bad guys try to kidnap Celina Jade (the woman in distress in Wolf Warrior 2), but Jaa and Chen rescue her. The dividing line between Asian good guys and Euro-American bad guys is obvious but thoroughly unexplored.

The fights are in keeping with the dominant 21st Century style, pioneered by Jaa in his Ong-Bak movies and in Donnie Yen’s MMA-influenced films like SPL and Flash Point, fast and hard, with lots of flying elbows and knees. Adkins and White and the other beefy white guys are much bigger and stronger than their Asian foes, making every fight essentially about the little guy out-thinking the bigger one. This is where the choreography shines: it’s honestly the only creative thing in the entire movie. Chen comes off particularly well in this respect, as you’d expect from a protegé of Yuen Woo-ping. Uwais seems somewhat underused in the fights, though his character is nursing an injured arm through the whole movie, but he does get the coolest outfit. Adkins seems a natural fight as the bad guy, though he isn’t nearly as much fun as White is, or Frank Grillo was in Wolf Warrior 2 for that matter. As is usually the case, Tony Jaa outclasses everyone around him, not just in the fight scenes, but with his ever improving acting, briefly even showing a flair for comedy that was too-often absent in his Thai films.

In many ways, Triple Threat hearkens back to Wheels on Meals, that mid-80s highpoint of martial arts cinema, starring Jackie Chan, Sammo Hung and Yuen Biao. That film too featured a trio of Asian stars uniting to defend a pretty girl from gangs of evil Europeans. But Johnson doesn’t have Sammo’s interest in film form or in comic set-piece construction, and his film has no emotional or intellectual resonance outside the visceral thrill of its fights (this is the reason why Furie, though just as generic in plot and filled with lesser stars, is more affecting). I suppose every generation gets the Wheels on Meals it deserves, and Triple Threat as such is a fine match for our dumb, brutal, meaninglessly efficient age.