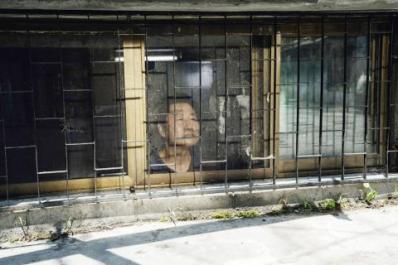 Bong Joonho’s 2019 film, Parasite, which took the Palme d’Or at Cannes, opens on a row of tired-looking socks, dangling in a little circle from a ceiling on a hanging clothes rack*. (*Update 1/09/2020: See note at the bottom of this entry.) From inside this basement apartment, we look through the socks, through a smudged window, onto a street outside, a ground-space that is right at eye-level. The apartment floor, then, is below the street, and the dwelling is a space where the damp moulds the bread and where the toilet must be up on a raised platform, so the plumbing can run downwards. The family–father, mother, young adult son, and young adult daughter–lives so low that even the toilet lives above them. It’s the sump of the city, where drunk men come to piss and where pest control sends billowing clouds of poisonous fumes, covering people and pests alike. The family shrugs and just breathes it in. What else is there to do?

And high above this family lives another family, in a tightly secured space that seems to be at the very shining top of the city. It’s a modern, walled-in garden, shutting out pests and drunks, and maintaining glossy glass surfaces and pristine green grass and foliage. It’s a world away from the refuse and grime, which, for this rich family, does not even exist. The lights that flicker on and off sometimes that might indicate to those inside the garden that another world is signaling, asking for recognition and help, go ignored; the flickerings are received only as further sign that lights turn on and off in a kind of obeisance to their owners’ presence. Even the young son of the family, who might read the code of the lights, sees a game for his own amusement.

“This is so metaphorical,” says Kim Kiwoo (Choi Woosik), the adult son, and of course, it is. As with Snowpiercer and Okja, Bong has returned, here, to his interest in the haves and have nots, to the boundaries constructed between them, and the incursions and smells that cross those boundaries, the violence inherent in those boundaries and the violence that results from their existence, and his work reminds us that the world is never as tidy as above and below, up and down, front and back.

The overt construction of such a metaphor, much like the caste-system train in Snowpiercer, might seem too cute, too neat, too obvious for emotional entanglement, but as with all of Bong’s work, the pungence of detail within the metaphor must, I think, at some level finally overwhelm and overpower the nose of the most fastidiously sniffy critic.

It is true that the overt metaphor is also accompanied by a sort of vaudeville stage act: much of the action and characterization is completely over the top, laugh out loud funny, pratfalls and gags of the sort that happen when two very unlikely things — here, the very rich and the very poor (especially the obtuse very rich and the clever very poor) — come first tip-toeing and then, crashing together. But, as so often with Bong’s films, the vaudevillian turns to melodrama and then it turns to just plain drama (as all the best melodramas are), and the detail of the thing and of the people we’ve been watching hits home. A spraying, brown-burbling toilet, which might have been racuously funny early in the film, becomes an emotional devastation. And the metaphor — all through the vaudeville-melodrama-drama shift — remains the same, but it takes on a resonance that is impossible to dismiss, and I cannot mark it with my red pen and note, “Your metaphor is too blunt.”

What remains for me, after the spiraling turning of the farce, or hilarity, or violence of the plot, is the poignance of those hanging socks; it’s the despair of a descending rush of water on stairs as it sweeps a family down, down, down again to the bottom of the world; and it’s the look on the Song Kangho’s face (that wonderful elastic face, that holds all the hilarity and despair and joy of a Bong movie) when his character realizes he’ll never be treated as human. These things make the overt metaphor and the vaudeville of Parasite impossible to either escape or dismiss.

And Parasite, judging by the uproariously response of the 1,100 patrons in their cinema seats when I saw it, is a crowd-pleaser. But Parasite, just like all of Bong’s work, evades both the Cannes arthouse stamp and the blockbuster-for-the-masses designation.

Parasite is . . . Parasite. You gotta see it for yourself.

(*Grateful for the correction from Eveline Chao about the ubiquity of the sock drying rack, which I didn’t recognize. Her initial tweet about it is here and her screencap of my original post here, with my response here.)