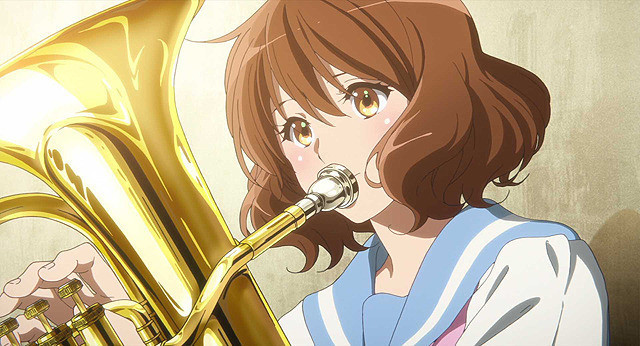 Liz and the Blue Bird was one of the great films of 2018. A spin-off of the slice of life anime series Sound! Euphonium, it focused exclusively on two of the show’s supporting characters, digging into their psychology and relationship as the band prepared the eponymous performance piece for a competition. It’s the strongest work yet by Yamada Naoko, one of the guiding directorial voices of the Kyoto Animation studio that was devastated last year by a deadly arson attack. This new movie, originally released here for one single show last summer but now playing at the Grand Illusion as one of their virtual cinema offerings, is not like Liz and the Blue Bird at all. Instead it is a direct extension of the series, picking up right where it left off, following the same primary characters over the next school year, but squeezed into a hundred minutes rather than patiently unfolding over the course of two dozen episodes.

It’s a curious decision, one that skims over the things that made the show so great, the small moments of human connection realized through the playing of music, in favor of a whole lot of teen melodrama plotting, mostly among new characters that we don’t much care about. The Sound! Euphonium series, like any slice of life story, anime or otherwise, is about detail, the accumulation of small, everyday moments that in the aggregate coalesce into a kind of epiphany or catharsis that can be overwhelmingly emotional. This effect isn’t unique to anime or dependent on the extended length of a TV series, by the way, two of my favorite films from last year’s VIFF, Mikhaël Hers’s Amanda and Dan Sallitt’s Fourteen (which will be getting a virtual release in the next few weeks) achieve the same kind of epiphanies in much the same way, in running times of less than two hours. A Brand New Day picks up where Sound! Euphonium left off, with the show’s main character Kumiko, a euphonium player in her high school’s concert band, moving to her onto second year. The movie follows the whole year, from the initial meeting with the incoming freshman, several of whom will have interpersonal problems which Kumiko will end up helping to solve (in keeping with the structure of the series), and culminating in the band’s performance at the regional finals, where they hope to earn a spot at the national competition.

Everything about the movie is consistent with the original series. The show’s director, Ishihara Tatsuya, is in charge, and he keeps the visual style exactly the same, where in Liz and the Blue Bird, Yamada had slightly altered it, elongating the characters and muting the color palette to give the film a somewhat less cartoonishly anime appearance. The show is structured around a series of little interpersonal mysteries where Kumiko finds herself in the position of needing to figure out why Girl A is upset at Girl B so that they can both play better and the band can improve. This works in the series not because of the stories (which are mostly generic and not all that interesting) but because they merely form the structure around which hang smaller moments of beauty and because each little story ends up illuminating some aspect of Kumiko, a character who is revealed (to herself as much as to us) only through her interactions with other people and, perhaps more so, through the music she plays. A Brand New Day still does that, but because the stories are all so compressed, they have no weight. Moments that would have been incredibly powerful in the series (Kumiko’s tentative relationship with the trombone-playing boy next door Shuichi, and her much more romantic one with star trumpeter Reina are the highlights) move by too quickly, and would be all but incomprehensible to anyone who hasn’t seen the series. By the end of the movie, Kumiko doesn’t seem to be all that different from when it began.

The film’s highlight, in fact, is the final concert, which is also its only extended musical sequence. And its power comes not through any of the characters we’ve focused on for the previous hour and a half, but rather in the oboe solo that was the primary focus of Liz and the Blue Bird. Liz takes place somewhere in the middle of the school year depicted in A Brand New Day, and while we see the shy but brilliant oboist Mizore in the background a few times, she doesn’t, as far as I could tell, have a single line (just as Kumiko and the series’ other primary characters were sidelined in Liz). The concert in fact doesn’t feel like the accumulation of Kumiko’s story at all, or any of the other primary characters from the movie. It’s the epilogue to Mizore’s story, the only one from this school year that really seems to matter.