This review was originally published in 2014 on the author’s old blog.

A young witch coming of age arrives in a seaside town to master her abilities. To do so she has left behind her family and her home, with nothing but a broom, a bag, and a cat by her side. The girl is a romantic and a bit of a klutz, longing for the ocean whilst crashing into trees. She is taken in by a kind woman on the verge of motherhood, who gives her a job and a home. An enthusiastic and indefatigable boy falls for her and pesters the young woman to be his friend. The witch makes pancakes. It is wonderful. END_OF_DOCUMENT_TOKEN_TO_BE_REPLACED

Spirits are nothing new for Studio Ghibli. Anyone that’s ridden the train with No-Face or enjoyed the amenities of Yubaba’s bathhouse knows that. But the company’s latest — and possibly last — feature, When Marnie Was There, is their first film that feels like a genuine ghost story. The film is certainly not out for scares, nor is it shocking. In fact, the closest thing it resembles might be Joseph L. Mankiewiecz’s The Ghost and Mrs. Muir. This is the platonic, animated, Japanese version of that. For kids.

END_OF_DOCUMENT_TOKEN_TO_BE_REPLACED 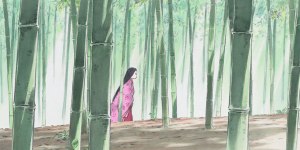 It is certainly a shame that The Tale of the Princess Kaguya lost to the pleasant if disposable Big Hero 6 in the Best Animated Feature category at last week’s Academy Awards, but it’s even more of a travesty that the film was not nominated for the biggest category, Best Picture. Yes, the Oscars are silly but there’s a special circle of silliness for the continued separation of films solely because they are animated or in a foreign language. Sure, the occasional film sneaks out of its categorical ghetto and garners larger attention, such as Toy Story 3, but by and large these vital films are given their token nod in these subcategories and forgotten. To extrapolate, if we are to have a category called Best Animated Feature, its nominees should only be judged on their animation, not their story nor their music nor their editing.  END_OF_DOCUMENT_TOKEN_TO_BE_REPLACED