It is certainly a shame that The Tale of the Princess Kaguya lost to the pleasant if disposable Big Hero 6 in the Best Animated Feature category at last week’s Academy Awards, but it’s even more of a travesty that the film was not nominated for the biggest category, Best Picture. Yes, the Oscars are silly but there’s a special circle of silliness for the continued separation of films solely because they are animated or in a foreign language. Sure, the occasional film sneaks out of its categorical ghetto and garners larger attention, such as Toy Story 3, but by and large these vital films are given their token nod in these subcategories and forgotten. To extrapolate, if we are to have a category called Best Animated Feature, its nominees should only be judged on their animation, not their story nor their music nor their editing.

The thing is, even if we were to evaluate the Best Animated Feature nominees on their artistic styles alone, Takahata’s film would still be the deserved winner. Hand drawn animation is an increasing rarity, just like movies shot and released on film. And even within the hand-drawn realm, the work on Takahata’s films by the talented personnel at Studio Ghibli is unique and exquisite. Starting with his previous feature, the joyous My Neighbors the Yamadas, Takahata has diverged from the company’s house style and adapted a more abstract approach. His backgrounds are often sketched and occasionally even non-existent. In Kaguya we get beautiful pastels and a watercolor look. In one of the most striking moments of cinema from the past few years, a scene of deep emotion is rendered in blurs of furious brushstrokes. The animation style changes to reflect and reenforce the narrative. 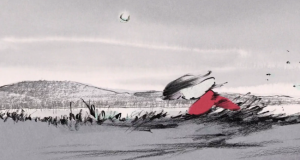 The narrative in question is one of the most famous in all of Japan, a folktale called The Tale of the Bamboo Cutter. An elderly couple discover a fantastical girl deep in the woods whom they raise as their own. She is extraordinary, beautiful and precocious. She bristles at conventions and as she grows more mature pines for the simplicity of her early days. She soon outgrows her world and the inferior suitors who chase after her. 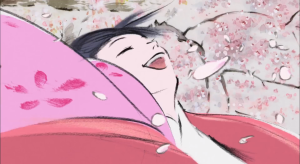 In Takahata’s hands, The Tale of the Princess Kaguya works as a purely supernatural fantasy full of bamboo babies and moon kings, or as a critique of the idealized existence princess stories perpetuate, or as a heartbreaking depiction of parental love and loss. Or all three all at once. Takahata’s is a patient and personal vision that has become all but extinct in contemporary cinema. Rumor has it this is the swan song for the 79-year-old director. What better way to go out than with the best picture, animated or otherwise, of the year.

(The Tale of the Princess Kaguya plays at SIFF Film Center in a dubbed version 2/28 & 3/1 and in Japanese with English subtitles 3/2.)