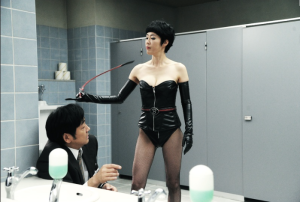 Takafumi Katayama likes it kinky. He works all day in a furniture store and comes home to an adorable son who proudly proclaims he is now the third shortest kid in his class. In between this life of domestic drudgery, Takafumi enjoys getting the snot kicked out of him by dominatrixes dipped in leather. When he discovers that a club provides subscription-service public humiliations, he is nothing but eager to register. But soon the beatings begin encroaching on his normal life and he wants to cancel. Sorry, Takafumi, no refunds.

The closest R100 gets to the big perverted release of the Valentine’s season is probably its color palette. The washed-out look of Hitoshi Matsumoto’s film might not include fifty shades of grey but it squeezes in at least half that. And odds are the similarities stop there. This writer has neither read E. L. James’ best-seller nor seen the big screen adaptation but would hazard to guess that they do not include a character named the Queen of Saliva.

Strangely enough, R100 recalls the work of David Fincher more than anything. The story of a man committed to a mysterious organization whose sole purpose is to terrorize him is reminiscent of the wickedly funny The Game. (So is the wickedly funny part.) Meanwhile, the mechanics of the film and its supreme self-awareness bear resemblance to the winking-through-a-black-eye of Fight Club. But Fincher is much more of a formalist and wouldn’t dare allow his work to be as unrestrained as Matsumoto is here.

For example, some of the plot points are tantalizingly left unanswered. As one character says, “Silence and neglect are part of the play session, sir.” Takafumi’s wife is in a coma throughout the film. We never find out how it happened. Could it have been S&M-related? Or did Takafumi become fixated on bondage and humiliation once the mother of his child was hopelessly out of reach? Other questions, however, are answered as bluntly as possible. Characters pause throughout the film to ask if they’ve just felt a minor earthquake. The reason for these tremors is eventually revealed. It might be the answer we expected but it’s certainly not explained in any way we were prepared for.

The title R100 means a movie restricted for anyone under a century old. The implication is that the brutality on display is so extreme that it is not only not for everyone, it’s practically for no one. The movie really sets itself up for this understanding by opening with a title card assuring viewers that all events are fictitious and were created using CGI and prosthetics. No animals (human or otherwise) were harmed during the making of the film. But it is ultimately revealed that the title actually means something far more interesting than a mere grandparental advisory sticker.

The first third plays out as the plot suggests, giving us what we want but not really surprising us. It is all relatively tame. But just when we feel comfortable with the random pummeling bestowed upon the hapless Takafumi, it gets weird. And exciting. To think that a film that begins with a man receiving a high-heeled kick to the face was willfully restrained is a shock.

Where we end up is better left unsaid. 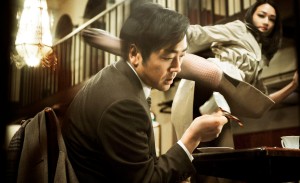