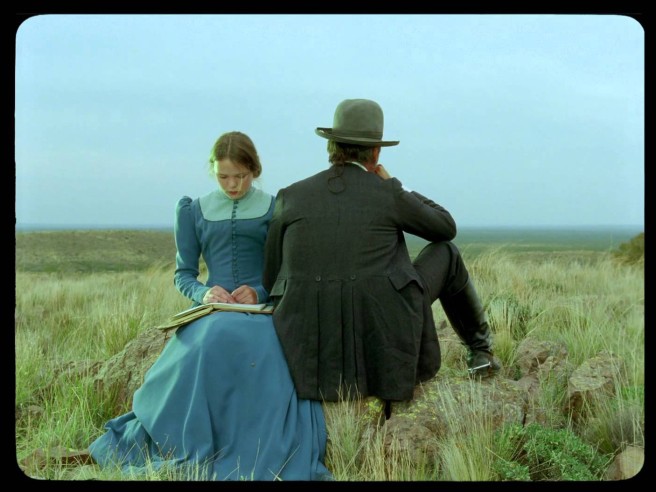 The latest from acclaimed Argentinian auteur Lisandro Alonso finds him working for the first time with a major international movie-star in a recognizable genre. Viggo Mortensen stars in a Western about a Danish cartographer attached to a military expedition in 19th Century Patagonia. When his 15 year old daughter runs off with a young soldier, he sets off on an increasingly weird quest across the desert wilderness, part Ethan Edwards in The Searchers, part William Blake in Dead Man. Like many so-called Slow Cinema films, the cinematic form that has become the dominant international style for festival films and the better art houses, Jauja is paced deliberately, with long takes and very little camera movement, the characters framed at a distance such that they are dwarfed by both the landscapes and, importantly, the sounds of their environment. It certainly isn’t among the slowest of such films (Pedro Costa’s equally impeccable Horse Money (hopefully coming soon to Seattle Screens?) is even more meditative, among great 2014 films), and seeing it a second time I actually found it quite brisk (it’s possible my speedometer has been miscalibrated after a month watching New Taiwanese Cinema films).

No film I’ve ever seen is as obsessively focused on what is not on the screen: in just about every shot a character is looking at someone or something just outside the frame, the blank spaces in the soundtrack filled  with animal noises: birds, insects, walruses. The unusually square aspect ratio, corners rounded as with a slide projector, only heightens the effect: our searcher is bounded in a box, surrounded by the unknown, blankness and blackness. Within the frame, the film is gorgeously colored, the blues and reds of the soldiers’ uniforms popping unnaturally against the greens and browns and grays of the desert, with an impossibly starry sky imparting a feeling of fairy tale whimsy to what might have been a dour and bloody saga of futility. We’re going to discuss the film in detail this weekend on the podcast Mike and I do in addition to Seattle Screen Scene, The George Sanders Show, and I hope to get into some theories about the film’s ending there. But I don’t think it spoils anything to say that the film ends up in a very different place than it begins (as all quests should, I suppose). The movement from detail-oriented realism to magical fantasy is so gradual, built into the temporal spaces of the long takes of Mortensen hiking through the increasingly alien, phantasmagoric desert, that when the film makes its great leap into archetypal madness the shift seems not only reasonably, but inevitable. The contradictions of colonialism, of paternalism, pretzelizing reality itself.