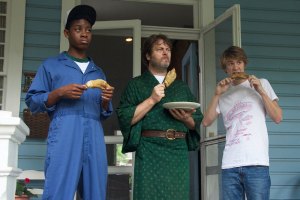 I am suspicious of my enjoyment of Me and Earl and the Dying Girl in spite of the fact that the film, premiering at Sundance in 2015, received the U.S. Grand Jury Prize and the Audience Award for U.S. Drama, and I am not alone in such enjoyment. Directed by Alfonso Gomez-Rejon, a director until now primarily known for his TV work (Glee, American Horror Story) and based on a YA novel by Jesse Andrews, the film follows Greg (Thomas Mann), the titular “Me,” who, under non-negotiable orders from his mother, befriends a high school classmate, Rachel (Olivia Cooke), who is diagnosed with leukemia; Greg is to be a companion to her through the ordeals of her illness and treatment. And so Greg, with his childhood friend and fellow film-buff, Earl (RJ Cyler), entertain Rachel in large part with the films the two boys make together, short films that cleverly pun around with titles of classic and foreign cinema: The 400 Blows becomes a film about “The 400 Bros”; 8 ½ becomes “Ate ½ (of my Lunch)”; A Clockwork Orange becomes “A Sockwork Orange.”