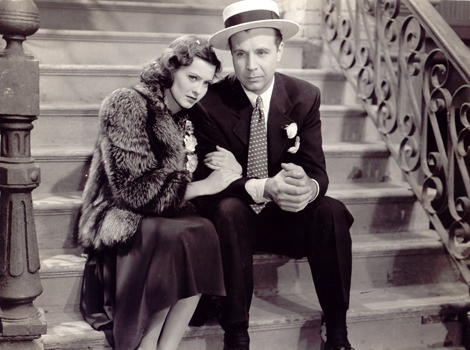 Tonight the Seattle Art Museum kicks off its latest series of 35mm film presentations, this one devoted to writer-director Preston Sturges, who with a handful of masterpieces in the early and mid-1940s brought the screwball comedy era to its magnificent conclusion. The museum is presenting six of his films, playing every Thursday night through August 13. We’ll be covering them all here at Seattle Screen Scene, along with recording an episode of the They Shot Pictures podcast devoted to Sturges, which we should have up in two weeks or so.

First up is the least well-known, unfairly I think, Christmas in July, in which Dick Powell plays a wannabe adman who is tricked by some fellow workers into believing his submission in a coffee company’s slogan contest has won the $25,000 grand prize. A series of misunderstandings gets him the big check, a promotion and an engagement, and before the truth can come out he’s showered his whole neighborhood with gifts and toys. Deftly sketching the generational layers of the mid-century immigrant class system, Sturges gives as subtle a portrait of the disasters and fantasies provoked by capitalism as you’ll find in Hollywood, a far cry from the sentimentality and privileged condescension of his future avatar John L. Sullivan. The tone is delicately balanced between screwball and melancholy, the warm loneliness of Powell and his girl (Ellen Drew) dreaming on a rooftop leavened by the ten minutes it takes him to explain his slogan to her (“It’s a pun” is his hopeless refrain). Sturges would never again be this relaxed.

END_OF_DOCUMENT_TOKEN_TO_BE_REPLACED 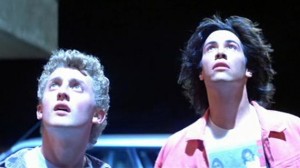 Bill & Ted’s Excellent Adventure is a hilarious and hopeful tale of friendship, full of great dialogue and memorable scenes. It is also a terrible history lesson. Well, depending on what angle you choose to view history. The film certainly doesn’t pause to get all the details right as Bill and Ted traverse the Circuits of History in their time machine, “bagging” influential human beings for help on their high school final project. There are those in any given audience that will always shake their head at an Abraham Lincoln who speaks in an inaccurate baritone (shh, don’t tell anyone but he also yells, “Party on, dudes!”) but in its way, Bill & Ted’s Excellent Adventure does accurately capture history.