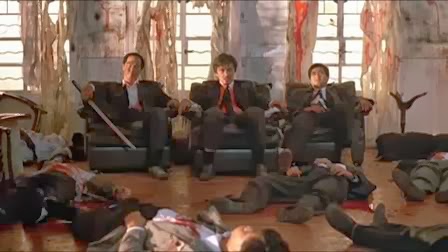 The following is an adaptation of a review of A Better Tomorrow II I wrote for my website a couple of years ago.

A Better Tomorrow was a massive hit for the Cinema City studio, director John Woo and the film’s producer and co-writer, Tsui Hark. As such, a sequel was inevitable. But almost immediately problems began. Chow Yun-fat’s character had died at the end of the first film, but a sequel without the man who’d become the biggest star in Hong Kong was unthinkable. So, of course, they decided his character Mark had a twin brother that nobody bothered to mention in the first film. The film is most horribly marred though by a new character, a former Triad gone straight named Lung and played by Dean Shek (a comedian and one of the founders of Cinema City). After Lung is betrayed by one of his underlings, Shek goes crazy and ends up in an insane asylum, where he is found by Mark’s twin brother Ken who nurses him back to health in tedious and endless scenes where Shek refuses to eat. Shek’s performance in these scenes is abysmally broad, so much so that it out-balances his later scenes, when he’s returned to his apparently bad motherfucker real self. The film’s most bizarre food-related scene, though, is a notorious one in which Ken, a restauranteur in New York, is shaken down by some mafia hoods and harangues them in badly-dubbed English, with Chow giving his loudest DeNiro impression while the dubber channels Pacino (note that since I wrote this in 2013, I’ve read that this scene is entirely performed by Chow and not an anonymous voice actor, but I don’t know that I believe it). (The best part of the scene is at the end, where a cop shows up, sees Ken trying to force the mafia guys to eat some rice at gunpoint and tells the hoods, “You’d better eat it!”)

Woo and Tsui bitterly fought over the final cut of the film, though as far as I know many of the stories circulating about the film’s production are merely apocryphal, including one from wikipedia (since edited to nothingness) that claims Cinema City’s editors cut each reel individually, with no supervision by Woo or Tsui or communication with each other. Tsui reportedly wanted the film to focus more on Shek, my only guess as to the reason for that is that he was trying to make a parody of the first film, while Woo wanted to play it as a straight epic. The first film is incredibly tight, its melodrama flowing logically from the restrictions imposed on the characters by their code, with the result that all the death and destruction seems to inevitably and tragically spring from one initial act of betrayal, from one code-violation. But the second film is meandering and unfocused, with bizarre twists of logic and character (especially almost every scene involving Leslie Cheung), with no flow or momentum to the story (multiple times a suspense scene will cut away to a 90 second scene with Cheung’s pregnant wife crying about something dumb, only to cut right back to another bit of suspense). My favorite bit of nonsense is the insertion of an unexplained character who makes what appear to be comic book or storyboard characters out of the people and events from the first film. Is this a thing? How does this guy know all that? And how exactly is he the (only) one who knows Mark has a twin brother?

Reportedly Woo has all but disowned the film, excepting its final shoot-out sequence, a spectacular showdown in which the three heroes take on a house full of bad guys that truly is something to be proud of. The action choreographer on the film was none other than Ching Siu-tung. I’m inclined to give Woo auteurial credit for the sequence, however, as it’s more in keeping with his approach to action than Ching or Tsui’s. Ching and Tsui are of the fast-cutting, impressionist school, well-adapted to fantasy films like Zu: Warriors from the Magic Mountain or Swordsman II, whereas Woo’s films are notable for their precise compositions, smoothness of motion and occasionally strikingly long-takes (best exemplified in what is arguably his finest film, 1992’s Hard-Boiled). Ching is always in rapid motion, with bits of movement cut together to create a dizzying effect where Woo is most known for his extensive use of slow-motion, not an abstraction of the body as it moves through space but a reification of it, lending his figures a quasi-religious significance. The final fight of A Better Tomorrow II leans more toward that Woo style than anything else. It’s capped by a beautiful showdown between Chow and a silent assassin (you know he’s a super-bad guy because he never says anything) that is perhaps the only scene in the film to depict anything like the moral complexity of the honor codes that drive the first film. 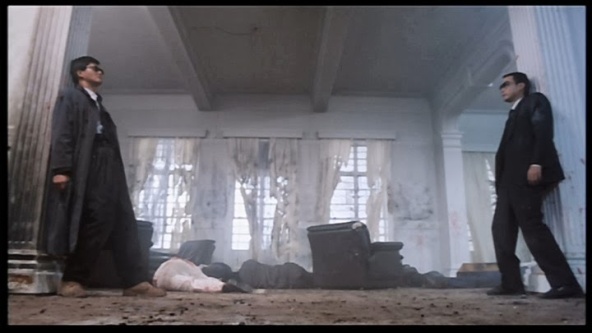 Ching Siu-tung would have a massive hit of his own in 1987 starring Leslie Cheung with A Chinese Ghost Story, produced by Tsui Hark for Cinema City and his own company, Film Workshop. Ching would continue to work with Tsui (as well as Johnnie To, a longtime friend going back to their time working in television, and with whom he made The Heroic Trio in 1993) throughout the late 80s and early 90s. But Tsui and Woo, after reuniting, even more contentiously, on 1989’s The Killer, Woo’s breakthrough film in the West, split over the next A Better Tomorrow movie, a prequel which Tsui took over and directed as A Better Tomorrow III: Love and Death in Saigon and Woo adapted into one of his greatest films, 1990’s Bullet in the Head with Tony Leung, Jacky Cheung and Simon Yam. Both Woo and Tsui moved to Hollywood in the early 90s, in anticipation of the colony’s handover to China. There they both directed films starring Jean-Claude Van Damme and found moderate success. Both are back working in Hong Kong, where Tsui has had a renaissance with CGI-fueled fantasy films like the Detective Dee series, while Woo’s last completed (solo) feature is the massive (and stunning) epic Red Cliff. Cinema City has produced only two films since 1991. (Note that in the years since I wrote this, Woo completed his two-part epic The Crossing, to mixed reviews. The second part of the film was reportedly such a mess that none other than Tsui Hark was called in to help salvage it. It opened in China a few weeks ago to little acclaim.)