If years-in-the-making is a means of quantifying quality, then Dangerous Men is twice as good as Boyhood. Production began at the dawn of the 1980s and yet the film was not completed until two and half decades had passed. And it’s not as if all of the footage was captured during Reagan’s presidency and put on the shelf. Some scenes are filled with late ’70s model cars and feathered hair, only to be interspersed with shots set at a makeshift police station with a calendar marking December 1995. 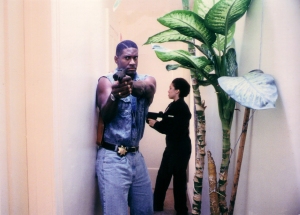 The film tells the story of a woman named Mina, who is out for revenge after her fiancé is killed by bikers. At least that’s the story for about half the running time until Mina ages out of the role and/or the production’s finances temporarily ran dry. At that point the story decides to follow Mina’s brother-in-law, a cop who is also tracking down some bikers but they don’t really have anything to do with one another. In fact the film’s final villain, the incongruously named Black Pepper, never actually does anything wrong, unless the extended belly dance he and his girlfriend watch as prelude to their lovemaking in his barely furnished apartment is somehow illegal.

Dangerous Men is inept. It is often inscrutable and more than a little insane. It spends a significant chunk of time following a thwarted rapist as he wanders through the California desert completely naked as a means of comic relief. He is also British for some reason. Later Mina picks up a prostitute but doesn’t tell the woman that she’s not interested in sex, she only wants to ask questions about her profession, until after they arrive at Mina’s apartment and the prostitute has gotten naked. A lot of people get naked. Most of them are not people you would want to see naked.

The film is an auteurist’s dream come true as Iranian transplant John S. Rad (yes, Rad) lists himself as writer, director, editor, producer, and composer. His is literally the only name in the opening credits. As the film begins, it is his musical score that garners attention with funky synth soundscapes bleeding into tranquil acoustic ballads. But soon it becomes apparent that Rad just had five songs on autoplay which he simply layered throughout the full cut of the film, irrespective of whether the music belonged at any given moment. As happens often throughout Dangerous Men‘s 81 minute running time, one song ends in the middle of a scene and is immediately followed by a tonally different tune, which then plays on into the next scene, which is set in a different location and filmed at a different time with different characters.

Dangerous Men’s release comes courtesy of Drafthouse Films, in partnership with the American Genre Film Archive. And while the film contains elements of the previous Drafthouse treasure Ms. 45, Abel Ferrara’s provocative and powerful tale of feminist revenge, Dangerous Men is more in line with some of Drafthouse’s less  accomplished offerings, such as the newly minted midnight movie staple, Miami Connection. And there is nothing wrong with that. If you want cinema to show you something you’ve never seen before, then Dangerous Men is as worthy a film as any. I for one had never seen a woman hide a knife between her naked butt cheeks.