Early in Nicholas Winding Refn’s new film, Neon Demon, Jesse (Elle Fanning), a pretty young hopeful from the Midwest and a new arrival to L.A, walks back to her room, down the long balcony corridor of the seedy Pasadena motel where she’s staying. The lighting is lurid, the corridor horribly dark, and when Jesse arrives at her door and the grungy looking lock sticks, an initial feeling of unease rises to panic. Finally force opening the door, she feels for the light, switches it on. Only it doesn’t switch on, and we sense Something is waiting for her in her room. It thuds and moves, and Jesse screams and flees, back down the dark passage. She arrives at a hotel manager’s metal-mesh screen door and cries out for help. A dark, indiscernible figure appears behind the screen, and instead of the relief of the presence of another human being, here, it seems, is another threat. Even when the manager’s figure shifts into the light and we see his face, the menace does not lessen. Hank (Keanu Reeves) leers at Jesse, and when he finally yells for a friend, and the two men escort Jesse back to her room, we fear for her. The men hem her in as they walk, one going before her, one behind. The one in front casually rips away what looks like “Police Do Not Cross” tape. There’s a creeping horror, as we think, Jesse, this naïve innocent, must get out, must get away – and yet she walks on.

Jesse’s room, the three discover when they arrive, has been ransacked by a mountain lion; as the men beat the door open, breaking that sticking lock, the cat looms out of the darkness, a prowling lithe presence. Hank, infuriated, blames Jesse for the destruction of her room. She, he insists, brought the thing into the room. It’s a charge that is horribly unfair; Jesse, surely obviously, didn’t bring the cat into her room. She’s simply an unsophisticated Midwest girl who didn’t realize wild animals roam the hills around L.A., sometimes eating house cats or small pets left outside for the night. Maybe they even enter one’s home at times if a screen door is left open.  Poor Jesse. She doesn’t get it.

Jesse’s naiveté established, we wait, on edge, for the inevitable destruction of an innocent. We guess L.A., the enticing dangerous city with its beautiful cannibalistic people and its industry of glamour, will chew this girl up. Or worse, perhaps it will play with her for a while like a cat with its prey, and then coldly consume her, maybe just stopping for a moment to present a heart, liver, and stomach on the stoop of Money and Fame, just as my own cat graciously leaves little mouse organs on my doormat after she’s finished with her mouse.

Refn, though, pushes us towards seeing something else about Jesse. Perhaps she is not so much the little country mouse as we thought. She tells the make-up artist Ruby (Jena Malone) at one point, “I’m not as helpless as you think,” and several situations begin to establish Jesse as predator more than prey – or at least, as complicit prey, a figure luxuriating in her own attractiveness and in the fascination she sees in others for herself. When she finds herself in what we think is a potentially threatening situation, alone with a cool, powerful photographer, who announces, abruptly, after gazing at her up and down, that it will be a “closed set,” she shifts from shivering vulnerability to arching catlike pleasure when the photographer strokes the gold paint make-up up her neck, again, again. Jesse is no victim here. She is a feline taking cool joy in the attention she deserves. 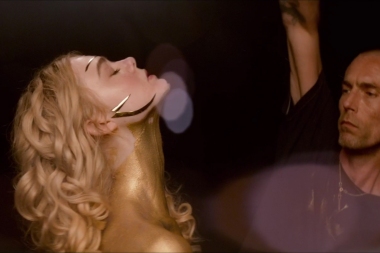 Jesse’s behavior, too, relative to the competing girls in the modelling world she aspires to becomes increasingly questionable, less sympathetic. At first, she seems wildly out of place, the only bare-faced girl moving through a bewildering club, where the lights flash and the music pounds, and the photo-perfect, made-up women gaze aloofly and coldly at her, challenging her right to be among them. But as Jesse gains favor with those in power in the business, we guess her innocence is not as thorough as it seems. Her small smiles of pleasure when other models fail where she succeeds give way to her triumphant claim, “Women would kill carve, inject, stuff themselves, hoping to look like a second rate version of me.”

Neon Demon, then, at first seems to be a critique of the implacable, voracious industry that chews young women up and spits them out the very second they are “past [their] expiration date.”  And  Jesse seems to be an unfortunate cog in the grinding gears of this system, where men, especially, are the threat: calculating male photographers, looking very young women up and down or predatory male motel managers taking pleasure in handling and abusing the Midwest “Lolitas,” those “hard candy” treats flung their way.

But the film’s most viciously satiric pleasures take the shape of the female form, women using, abusing, desiring, and devouring other women. One male fashion designer,  to be sure, happily pits women against each other, in one scene appealing to another man to assess the relative beauty of one woman against another, but in the scene, it is the other man, who is the most hapless, sympathetic character, forced into a position of assessment, against his will. It is the venom of the women for each other that gets the spotlight, not the designer’s provocation or the male assessor. The scene, notably, opens as the designer quotes a few lines from Henry V, Henry, in this section of the Shakespeare play, urging his men on to battle, and it is clear that the designer doesn’t have male soldiers in mind, but rather the coming battle between the dangerously catty women:

But when the blast of war blows in our ears,
Then imitate the action of the tiger:
Stiffen the sinews, summon up the blood,
Disguise fair nature with hard-favored rage
. . .
Now set the teeth and stretch the nostril wide,
Hold hard the breath and bend up every spirit
To his full height.

The guilt of the grotesque, devouring action in the last third of the film falls squarely on the shoulders of the women. There is little sense of a larger industry putting immense pressures on these women to encourage them to act the way they do. There is no sense whatsoever that there could ever be camaraderie among the women. Even offers of seeming friendship and a statement like, “It’s good to have good girls around,” carry terrifying menace. And if the film begins explicitly with the male gaze – a male photographer, looking through his lens at the murdered body of a woman in a photo shoot – it ends with a leering female gaze, a scorned lesbian woman gazing at the lithe, naked bodies of other women. And she is a kind of monstrous Other. If there is a moment, when the camera focuses on these bodies and we feel, briefly, our own voyeuristic complicity as viewers, it very quickly shifts to the female voyeur monster on screen, a woman drenched in the demise of another woman and positively luxuriating in it. This female voyeur has paintings of voluptuous naked women hanging on the walls of the home she occupies; a stuffed leopard crouches on a mantel, an external form of this woman’s appetites, which glow red, either with desire or with murder, depending on the moment.

In all of the shallowness of the neon L.A. world, which prizes youth and beauty above all things, only one person protests: a young man who cares for Jesse, says, indicating there’s more to her than beauty, “I bet you’re good at a lot of things.” He alone rejects the statement that “beauty is our greatest treasure.” Our supposed innocent, Jesse, does not reject this. The models do not reject this. And in the end they devour one another, and we get to watch them, the bloody spectacle put at a comfortable distance from ourselves, for we do not have to sympathize with Jesse anymore, her cold heart inviting the fate that befalls her, and we do not have to feel so bad about watching these beautiful women strip and present their bodies. Other women are the creepy watchers, not us. The other women are the ones who luxuriate most in consuming the bodies of other women, dead or alive. As audience members we can groan or squeal in disgust at them as we watch, quite safe from blame in our cinema seats.

My initial thought upon leaving the cinema was that Refn’s film might fall under the classic, if overused and probably ill-advisedly used, critique of style over substance. The style is, indeed, overwhelming: blinding, rapid flashing lights; pounding intellect-shattering music; gorgeous framings and compositions; ravishing costuming and set design – all adding up to an all-consuming effect, a truly cinematic experience. The style, neatly side-stepping the “style over substance” critique, in some sense is the substance. Like a glittering micro-version of Tinseltown, the film itself mesmerizes, and if you are at any moment enticed by such glitter, the film is critic-proof, for if the film is shallow, if it is all style, but if it has enticed you, how can you critique it? You’ve fallen for the glitter and glam just as much as anyone, and it makes its point. Tinseltown is a shallow, glittering place, and people everywhere offer their bodies at its altar. If you presume that’s too cheap a critique, if the film offers too easy a metaphor, but you still fall for the glamour, how can you protest? The film wins.

Still, I am not quite ready to give it this triumph. I’ll admit to falling for the style. But the film’s own undoing, for me, may be that it is not shallow enough. It isn’t, in fact, all style over substance, and its substance aims for what seems to me to be an explicitly vicious critique of women – and no one else. The male gaze and male desire are not, finally, in this film, much of a problem at all. True, Hank the motel manager preys upon the young girls who arrive in L.A., and in one nausea-inducing scene, we believe we hear through the walls exactly how far he’s willing to go with his appetites. But with Jesse’s gradual unveiling, with the emphasis at the end upon female-driven destruction, and with the lone sympathetic character cast as a man, protesting against a shallow world, ultimately, we must conclude that Jesse did, indeed, bring that wild cat with her into her motel room. L.A. was no alien place that proved to be her undoing. She did that herself. After all, her mother always told her, “You’re a dangerous girl.”