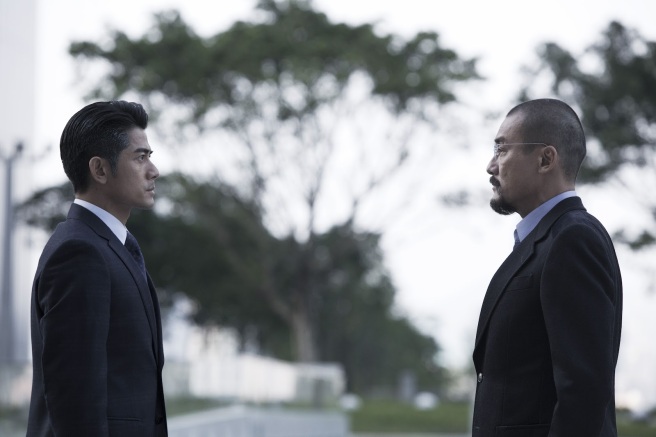 Picking up right where their 2012 hit film, which featured an all-star cast and swept the Hong Kong Film Awards, left off, Longman Leung and Sunny Luk present another suspenseful tale of corruption and double-dealing in the highest echelons of the Hong Kong police department, its two institutional halves at (cold) war with each other. On the operations side is The Other Tony Leung, a tough man of action, of the “break the law to enforce the law” type valorized in Hong Kong cinema since at least the mid-1980s. On the administrative side is Aaron Kwok, emotionless, calculating and fiercely determined to uphold the letter of the law. The two wage a Crimson Tide-esque battle of wills over a tense hostage situation, in which an Emergency Unit van and its five police officers have been captured by unknown criminals. Kwok wins out and assumes command of the force, and the second half of the film follows his investigation of the terrorists, leading to the arrest of Leung’s own son, played by Rise of the Legend‘s Eddie Peng, as the ringleader. But, in a cliffhanger ending, Peng’s accomplices demand his release: they have now kidnapped Kwok’s wife.

This is exactly where the new film picks up (even replaying the final scene from the first one). Eschewing the structural neatness of Cold War, which recalled Kurosawa’s High and Low in its ruthless elegance, Cold War 2 tangles a dense web of interconnections, as the conspiracy supporting Peng grows outward to encompass much of Hong Kong’s political establishment. The model here seems to be Johnnie To’s Election movies: where the first film followed what seemed to be a life and death struggle for organizational control (of a Triad, in that case), the second reveals that position to merely be the instrument of vastly more sinister and shadowy interests. In To’s saga, it’s the Mainland Chinese government, specifically its security apparatus, that is pulling the strings of Hong Kong’s organized crime leadership. With Cold War, its an amoral blend of legislative, business and veteran police interests manipulating the situation, all in a scheme to place their candidate in the office of Chief Executive. Specifically, they, led by veteran actors Waise Lee (the villain in John Woo’s A Better Tomorrow and Bullet in the Head) and Chang Kuo-chu (star of Edward Yang’s A Brighter Summer Day), wish to use Kwok to discredit the heir apparent to the post, the Security Bureau Secretary played by Andy Lau in the first film and weirdly absent in this second film. To this end, they enlist the support of an incorruptible attorney played by none other than Chow Yun-fat. Chow and Kwok, in turn, elicit the help of their protégés, played by Janice Man (The Midnight After) and Aarif Lee, respectively. Thus the film becomes not only a story of political corruption in Hong Kong with trenchant echoes of the PRC’s interference in local politics (specifically the scandal that kicked off the Umbrella Movement of 2014, which was sparked by the Mainland’s interference in Hong Kong’s ability to choose its own Chief Executive, but also a kind of generational struggle between actors who rose to prominence in the 1980s (Leung, Chang, Lee) and those who arose in the 90s: star Kwok along with his contemporaries Charlie Yeung (playing PR exec Phoenix Leung) and Lam Ka-tung (who got blown up in the first film and with whose funeral the second begins). Each side enlists the help of someone from the 2010s (Peng and Lee). Chow (whose stardom transcends generations) and Man are caught in the middle. (Here is as good a place as any to note that Tony Leung’s character is named “MB Lee” in the subtitles, but listed as “MB Waise Lee” everywhere else, while Kwok’s character is “Sean Lau”, which is the English name of frequent Johnnie To star Lau Ching-wan. Why this is I have no idea.)

Like the first film, Cold War 2 has a lot more scenes of suspenseful dialogue than it does traditional action scenes, though the ones it does have are satisfyingly full of suspense and explosions. Unfortunately, the film trades in the distinctively modernist chrome and black, abstracted architecture  of its predecessor for more worldly settings and a color palette of earth-tones and afternoon sunlight. The slick glass and steel of the first film’s high-rises indicated a world apart from normal life: the film barely ever ventured to street-level and only once did any character actually eat any food. The new film is gauzier, it goes out into the streets and train stations, junkyards and back-alleys; its world is diffuse, a mundane yet ungraspable typicality. The structural clarity of the first film is similarly lost: in tracing its web of conspiracy it loses focus. This mirrors of course the transformation in visual style, but what works in theory isn’t necessarily pleasurable. Cold War was something unique, building upon the style of Infernal Affairs as successfully as any 21st Century non-Milkyway Image Hong Kong film has done. Cold War 2, seems like a step backward into conventionality, while still remain a notch above all-star time-wasters like the Overheard series. Unlike SPL 2, released earlier this year to much critical acclaim if not much box office, it’s a film that probably requires its audience see the first film. Then again, I would now say the same about Election 2, and that’s a sequel I saw before its predecessor (when it was released here under the misleading name Triad Election). I didn’t then know it was a sequel and nonetheless I thought was both easy enough to follow and pretty great, so who can say? At least Cold War 2 is being released here under its proper title.