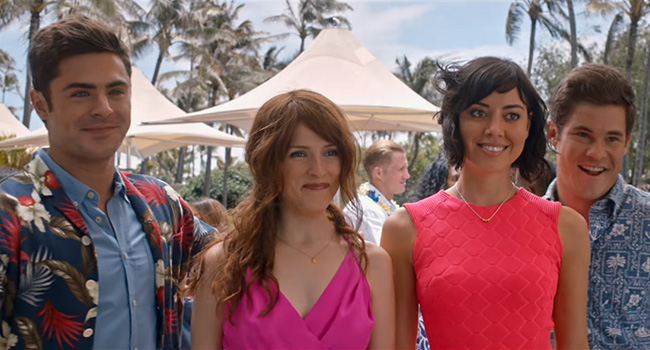 The third of a promised six(!) Anna Kendrick movies to hit Seattle Screens in 2016 is an exemplar of the mayfly model of modern American comedy. Based on a true story formerly adapted into a book, it’s about a pair of dim-witted brothers who are tasked with finding acceptable dates to their younger sister’s wedding. An opening montage establishes their vision of the world: slow-motion revelry, drinking, beautiful people, they see themselves as the life of every party. Home videos presented early in the film by their parents cleverly undermine this fantasy conviction. In fact, the two are loud, obnoxious, and clumsy: their antics destroy every gathering and event they attend. Thus their quest: they must find nice, respectable girls to keep them in line at the destination wedding in Hawaii. To this end, naturally enough, they post an ad on Craigslist, become internet famous, and suffer through a series of meet-and-greets with dreadful dames, a Seven Chances for beer-obsessed millennials. This is apparently as far as the book goes, while the film introduces Kendrick and Aubrey Plaza as the boys’ dates. A kind of Romy and Michelle for the Facebook era, Tatiana and Alice, quickly established to be just as dumb and hedonistic as Mike and Dave, pretend to be nice girls in order to get the free vacation. It’s an attempt at short-circuiting the book’s misogyny with a “hey women are gross and terrible too”. The rest of the film consists of episodic gag sequences at the wedding, with unimaginative and indifferently filmed slapstick adding an element of body horror to the vulgar dadaist improv one-liners that have become the dominant idiom of our comedies in the post-Apatow era.

Those jokes are undeniably funny, delivered with aplomb by Kendrick and Plaza and, somewhat surprisingly, by Zac Efron as the better-looking of the Mike and Dave pair. Adam Devine, as the other one, brings exactly the same mix of misanthropic attention-grabbing arrogance and pathetic self-pity he does to the Pitch Perfect films, which is to say his timing is excellent but his character and performance is deeply unpalatable. Sugar Lyn Beard (remember her the next time you hear someone make fun of Angelababy’s name) plays the bride and gets the brunt of the film’s body humor (an ATV to the face, an extraordinarily satisfying massage from Kumail Nanjiani) while Sam Richardson, who is so good as the secret weapon of Veep, plays her groom and is wasted as the film’s straight man. The great Stephen Root plays the father and gets to yell a lot. It’s all pleasant enough to watch, if you enjoy this kind of thing, but there is absolutely nothing else to it aside from the laughs, and even those only work once. This is the problem with comedy built out of shock: the incongruous word pairings that make up these improvised lines are often lovely in their grotesquerie, but after the thrill of the new, there’s nothing left. A more radical film like Leslye Headland’s Bachelorette has the courage to make its characters distasteful enough to match their vile language and behavior, while her Sleeping with Other People engages fruitfully with a romantic comedy tradition that doesn’t match contemporary relationship norms. Mike and Dave, directed by veteran of televised and online comedy videos Jake Szymanski (his HBO short 7 Days in Hell was funny for a moment last year), doesn’t take any chances with its genre, content to turn the detestable real-life Mike and Dave into hang-dog dopes, generic lovable losers, while Tatiana and Alice are revealed to themselves possess equally generic hearts of gold (Kendrick, as our hero, is merely acting out due to wedding-induced heartbreak; while Plaza’s outside toughness conceals a loving friend, blech). Apatow’s films usually have their aspirations toward depth of feeling and humanity, working to get past the one-liners to uncover an emotional truth, often in ways that defy generic convention. But even the ones that aren’t concerned with the emotional lives of their characters at least sustain their fantasy worlds: the best Apatow-related film-product, the first Anchorman, is a pure farce that never allows reality to interfere with the demands of a joke. Mike and Dave doesn’t have the courage of its vulgarity, or any conviction in its characters’ emotions. I laughed a lot in the moment, but a week later I don’t remember any of the jokes.