Before Ava DuVernay, before Dee Rees, before Gina Prince-Bythewood, before Kasi Lemmons, there was Julie Dash. Dash’s Daughters of the Dust earned its place in the history of film by becoming the first feature film directed by an African-American woman to gain general theatrical release and distribution—and it earned that place in the shockingly recent year of 1991. It is a remarkable piece of work not only for its place in cultural history but also for its distinctive aesthetics and for the story it tells: a story of hope, grief, and transition set among the Gullah people, a group of African Americans living on the islands off the South Carolina and Georgia coast. Somewhat isolated from the continental United States, as the film’s prologue tells us, the Gullah retained elements of their original African languages, values, and ways of life long after African culture was violently suppressed in the lives of mainland African Americans. Dash tells a graceful, dreamlike story of one Gullah family reuniting in 1902 before departing for life on the mainland—and for a nation on the brink of modernity.

END_OF_DOCUMENT_TOKEN_TO_BE_REPLACED

Journey to the West: The Demons Strike Back at the Pacific Place

The sequel to Stephen Chow’s adaptation of the classic Chinese novel about a Buddhist monk who travels all the way to India to retrieve sacred scriptures, and is defended along the way by super-powered ex-demons, including the legendary Monkey King. The first part, Conquering the Demons, played here in 2014, exclusively at the Grand Illusion. Nowadays, the multiplexes have a lock on Chinese (and Korean, and Indian) imports, and the new film will be playing only at the Pacific Place. That is, unless it follows Chow’s The Mermaid, from last year, and proves enough of a hit to make its way onto more screens. Chow wrote and produced The Demons Strike Back, but Tsui Hark directed. I’ll have a review of the new movie once I get a chance to see it, in the meantime I wrote a survey of Tsui’s career to date for Movie Mezzanine and I have a index of everything I’ve written about Tsui at The End of Cinema.

I Am Not Your Negro (Raoul Peck) Fri-Thurs Our Review

Children’s Film Festival Seattle Fri-Thurs Full Program
The Prison in 12 Landscapes (Brett Story) Fri Only
Quinceañera (Richard Glitzer & Wash Westmoreland) Weds Only Free Event
I Think You Are Totally Wrong: A Quarrel (James Franco) Starts Weds
This Is the Way I Like It 2 (Ignacio Agüero) Thurs-Sat
Daughters of the Dust (Julie Dash, 1991) Starts Thurs Our Review 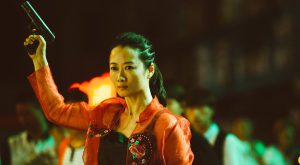