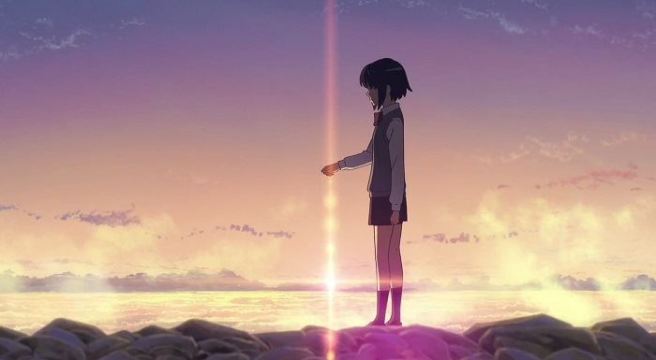 Makoto Shinkai’s latest anime smashed records across Asia last fall, becoming the highest grossing Japanese film in the history of China and Thailand, the second highest grossing Japanese film in Japanese history (behind Spirited Away), the worldwide top-grossing anime ever and the eighth highest grossing traditionally-animated film of all-time. Finally opening across North America this week, it has a chance to add to that record, and I think we’re all pulling for it to raise that extra $20 million it needs to overtake Pocahontas. Like his highly-acclaimed short features 5 Centimeters per Second (2007) and The Garden of Words (2013), it’s a story of two young people attempting to forge a connection. Romantically, yes, but also metaphysically. Apparently caused by the appearance of a comet close to the Earth, country girl Mitsuha and city boy Taki begin switching bodies: sometimes they wake up inhabiting the other, sometimes they don’t. They find this bewildering, of course, but eventually they figure out its rhythms and it turns out to be quite fun. And funny: Taki’s teenaged-boy obsession with his own (sort-of) breasts is perhaps the film’s truest note. Things reach a crisis point when the comet reaches its closest point and the body-switching ceases, sending each character in desperate search of the real-life other, complicated by the fact that they keep forgetting the other person’s existence.

Your Name. isn’t quite as other-worldly gorgeous as those two earlier films (they’re the only two other features I’ve seen from Shinkai), its combination of hand-drawn, computer and rotoscoped animation is a little more conventional, just as its plot and approach to narrative is a little more familiar. 5 Centimeters per Second was a trilogy of vignettes about a couple who loved each other once but where split apart by geography, and their attempts and failures to reconnect over a lifetime. The Garden of Words was about the Platonic love between a depressed teacher and a fifteen year old student. Your Name. unites these two in splitting its heroes in both time and space; human connection being so difficult that truly achieving it involves breaking the known laws of physics. The tragedy of the film comes from the loss of memory: human brains are unreliable and fungible, and the omnipresent devices we think make us more interconnected are even more fragile. Tradition and ritual though unite us with a past we cannot comprehend. Mitsuha is part of a long family line of makers of braided cords, who specially prepare a kind of saké as an offering for an unnamed god. They’ve forgotten the reasons for the rituals, but they perform them nonetheless. Where every other device of history and communication (cell phone, history book, museum photograph) fails, the braided cord, explicitly a metaphor for the dense and incomprehensible construction of space-time, persists.