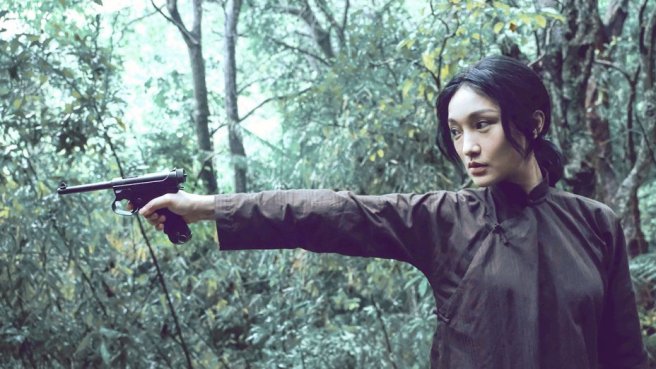 The most anticipated, and almost assuredly the best, World War II film of the summer, by one of the greatest filmmakers of the past forty years, opens here tomorrow exclusively at the Pacific Place: director Ann Hui’s Our Time Will Come. Based on true events in the resistance against the Japanese occupation of Hong Kong, the film is so effective at its generic thrills, the suspense and action sequences and quiet moments of melancholy patriotism and laments for lost comrades that form the core of the resistance/war film, everything from For Whom the Bell Tolls to Army of Shadows, that one almost doesn’t notice that she’s radically revised one of the most masculine of genres into a story about the unbreakability of women.

Beginning with a prologue showing the mechanics of the evacuations of hundreds of intellectuals (poets, artists, professors, etc) from the colony in 1942, with Eddie Peng as the dashing commando in charge, flourishing his pistol and his grin with cock-eyed abandon, Hui shifts focus to a school teacher and her mother. The teacher, played by Zhou Xun, joins the resistance and becomes the head of the Urban Unit, shuffling information to the guerrillas in the hills. In a parallel story, her ex-fiancé (Wallace Huo), unknown to her, is undercover within Japanese headquarters, where he and a young secretary (played by Jessie Li) are one of the primary sources of Zhou’s information. The mother, played by Deanie Ip, helps out here and there, providing warm meals for exhausted agents on their way in and out of the city.

Eddie Peng is on a roll like no other male star in Chinese cinema, building on impressive kung fu performances in Rise of the Legend (which isn’t very good) and Call of Heroes (which is very good) and a comic turn in Duckweed, he’s quite impressive as the guerrilla leader would could have been the hero of this story had anyone else directed it. Zhou Xun, one of the great Chinese actresses of the past 20 years, is even better in a performance of quiet determination matched in every way by Deanie Ip’s fussy but resilient mother. Ip is a singer of some note, but also an actress: her New Wave bona fides go all the way back to roles in Tsui Hark’s Dangerous Encounters-First Kind and Patrick Tam’s Love Massacre. Jessie Li, who was exceptional in Phillip Yung’s 2014 Port of Call, makes the most of her small role.

Rather than building to one big mission, the film follows an episodic structure, narrated from the present by an interview with The Other Tony Leung, playing an elderly taxi driver who had been a child soldier during the war. Most of our scenes of him are single shots in black and white, but towards the end of the film we see that he is recounting his story at a table with several other men, being interviewed by Ann Hui herself (I think, we don’t get a clear look at her and she’s not listed in the credits). Much plot information is implied, either in looks (as when Huo decides to recruit Li as a spy) or in edits (Hui cuts from Zhou and a partner printing propaganda leaflets to Li and her friend in their office. Li isn’t doing anything suspicious, she and her friend merely open a package and go dancing, but the cut creates a subtle relation between the two pairs of women and only later do we explicitly learn why). The choice to focus on women never feels forced or propagandistic, it just feels natural that Zhou’s work is given as much emphasis as that of Peng and his band of armed men.

The film is the latest in a series of films Hui has made exploring the experience of women during the Anti-Japanese War, alongside her expert adaptation of Eileen Chang’s novella Love in a Fallen City from 1984, 2014’s The Golden Era, about a novelist caught up and tossed about in the war and the civil war that followed, and her semi-autobiographical 1990 film Song of the Exile, about her mother’s experience as a Japanese woman in China during and after the war. The Golden Era in particular has strong ties to Our Time Will Come. Aside from their focus on women during wartime, both are based in literary worlds: Tang Wei in the earlier film is a novelist, Zhou Xun in Our Time is a teacher of literature and lover of poetry (as is Wallace Huo: he bonds with his Japanese commander through a shared love of Chinese poetry, in particular the work of Su Dongpo). Both are narrated by actors playing men who knew the real-life characters the films are based on. But where the former film is almost experimental in its use of shifting perspectives (Tang Wei’s performance shifts, sometimes dramatically, depending on which person is doing the narrating) and jumbled timeline, Our Time is straightforward and direct, something Hui talks about in this interview with Edmund Lee of the South China Morning Post:

““I think in making every new film, I’m merely trying to make amendments to my last film,” she says.

“So my last film [The Golden Era] was a very serious drama? I’m going to do some fight scenes in my new film [Our Time Will Come]. That film had a very complex narrative structure? I try to make this one simpler. That film had a very heavy tone? I let the actors of this film have a more lighthearted time. All in all, we’ve had a lot of fun making this new film. I’m not sure it’s the right thing to do though!”

Never as bombastic or expressionist as her New Wave colleagues like Tsui or Tam, Hui may nonetheless be more radical than any of them, quietly reorienting popular genre cinema in more expansive directions.⁠1 To watch a Hui genre film in the same week as something like Alan Man and Felix Chong’s Extraordinary Mission is to be reminded just how much is missing from most popular cinema. She’s the most decorated director in the history of the Hong Kong Film Awards, with more Best Director wins than Tsui, Wong Kar-wai, Johnnie To, or anyone else. Yet she remains virtually unknown in America. But I believe that won’t always be the case, that eventually great artists get their due, that great directors confined to small, specialty releases now will make their way someday into the auteurial canon. Until then. . . see you after the victory.

1 It’s worth noting though, that like Tsui’s 2014 The Taking of Tiger Mountain, and Mabel Cheung’s 2015 A Tale of Three Cities,  Our Time Will Come explicitly removes any kind of political content from the story, turning Communist freedom fighters into generic expressions of patriotic pride. The focus remains on personal, and therefore universal, experiences in each film, rather than be tied down to any specific ideology, which is probably the best we’re likely to get out of mainstream Chinese cinema at the present moment.