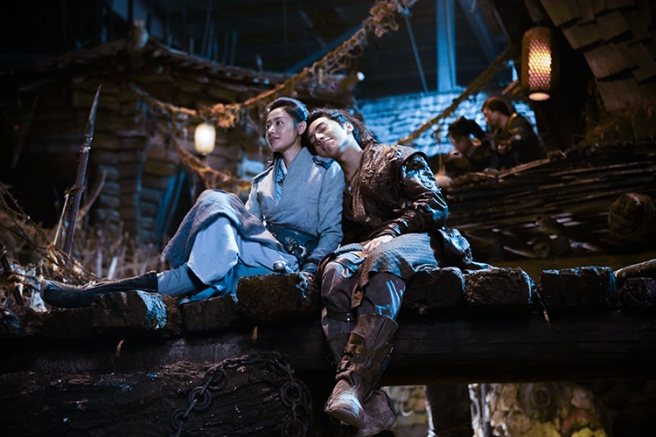 In what has been a strong summer for Chinese language releases here in Seattle (with Our Time Will Come, Wolf Warrior 2, Meow, Once Upon a Time, and The Adventurers following SIFF’s minifestival of Hong Kong films and their presentation of the restored Taipei Story last week), Legend of the Naga Pearls shrugs its way on screen for the last week of August. The latest in a string of fantasy films built around special effects and photogenic stars, it’s set in the universe of Novoland, which is apparently a popular fictional construction in China, home to more than thirty novels by various authors. This story follows 25 years after a war between humans and the villainous Winged Tribe. A gang of evil former Winged People are trying to assemble a weapon with which to unleash a horde of deadly flying tapirs (seriously) on the human population, which has built their city, Uranopolis, atop the ruins of the Winged Tribe’s city in the clouds. A rag tag team of adventurers unites to steal the key item first. They include the daughter of a good Winged Person, the callow son of a human prince, and a thief with a mysterious blue mark on his hand that turns out to be connected to the eponymous MacGuffin.

The plot by numbers is matched by the predictability of the performances and characterizations. I’d never heard of Darren Wang, who plays the thief, before, but after watching this I would have guessed he was a Taiwanese TV star. And that’s exactly what he is (he’s apparently very good in the 2015 romance Our Times, which I haven’t seen). Wang is mechanically affable, shifting gears uneasily from winking charm to cries of anguish, and constantly making eyes at Zhang Tianai, who is herself saddled with one of the least progressive Chinese action heroines I’ve seen in sometime. Simon Yam is in this movie, unrecognizable under piles of makeup and cliché. A major star, one of the great actors of the last 30 years, an actor who can enliven even the weakest of material, this is the least Simon Yam performance I’ve ever seen him give.

The real star of the film is the art direction, which creates a unique and interesting fantasy world out of CGI. Unfortunately, director Yang Lei buries much of it in murky blue lighting, balanced only by flames. Compared to Once Upon a Time, which used CGI to create something bright and new, Naga Pearls is awash in the dim oranges and teals we’ve come to deplore in Hollywood cinema. There’s even a CGI creature sidekick, a giant fuzzy armadillo that hangs around with Darren Wang mostly for fart jokes. It all seems so manufactured, so obviously an attempt to create something that resembles something else, a competent imitation of the technology of the Chinese fantasy film in the post-Detective Dee era, but with none of the idiosyncratic soul. I longed for the audacious silliness of Meow, the breathless nationalism of Wolf Warrior 2, the fundamental philosophical incoherence of Demons Strike Back.