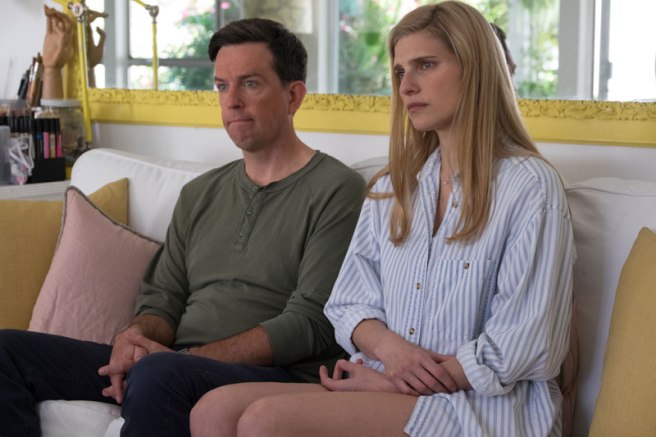 Lake Bell’s comedy I Do . . . Until I Don’t opens with a God’s eye view of a funeral. Mourners hold oddly colorful umbrellas while a drizzle falls and, in voice-over, a woman with an English accent intones a jeremiad against the “‘til death do us part” prison of marriage. There are several visual and thematic cinematic nods here, from The Umbrellas of Cherbourg to Four Weddings and a Funeral to, winkingly, Bell’s own In a World . . . (2013), a film about a woman breaking into the male-dominated world of voice-over narration. The tone of I Do . . ., however, is different from any of these—at least at first. Among the funeral-goers are Cybil (Mary Steenburgen) and Harvey (Paul Reiser), a married couple who spend most of their time sniping at each other about petty grievances. They are soon to be among the subjects of a documentary by filmmaker Vivian Prudeck (Dolly Wells), whose voice we heard over the opening shot. Prudeck is determined to expose what she sees as the bankruptcy of the institution of marriage by filming unhappy married couples and contrasting them with one happy unmarried couple in an open relationship. And so, as the film gets underway, we watch married people take potshots at each other, make brittle wisecracks at each other’s expense, lie to each other, and generally prove Prudeck’s thesis. We will have to wait for anything like the joy, warmth, or melancholy of Cherbourg or Four Weddings—or even the oddball wit of In a World . . .—until after Vivian’s monomania has nearly wrecked several relationships. Fortunately, the payoff is worth the wait.

In her career as an actor, writer, and director, Lake Bell has made a specialty of dissecting the folly of egomaniacs in show business. While this egomania is again a theme in I Do . . ., as either wielding a camera or performing in front of one gradually erodes the humanity of all the characters involved, Bell also attempts something larger here in her study of marriage. It’s tricky for a storyteller in any medium to tackle a major social institution in and of itself without coming off as facile, cliché, or ponderous, but Bell keeps her attention on the individuals enmeshed in the institution, and that attention is so specific and keen-eyed that the story and characters feel genuine even as the plot becomes more madcap. Ed Helms wonderfully plays Noah, the hapless owner of a failing window-covering business, and watching him sincerely try to understand and please his increasingly unhinged wife, Alice (played by Bell), while also engaged in his own selfish, all-too-human dissimulations, is one of the film’s genuine pleasures. Bell herself, as a woman who has not yet found her voice within the world or within her marriage, captures a kind of faltering, anxious humanity in her performance, lending warmth to her trademark brisk comic persona. But the film’s real standouts are the highly skilled Steenburgen and Reiser. Their performances are loose and confident, the product of years of experience in the genre, and their chemistry is palpable even as they bicker and hilariously torment one another. Bell gives them room to move and breathe as performers, and it’s a true joy when, late in the film, their characters find a moment of genuine, hard-earned tenderness with one another.

The film has only two major weaknesses. One is its tendency to reduce some characters to stereotypes. Vivian, for example, is the British Villain, brittle and cold-hearted. She could have been interesting in her skepticism about marriage, but the film portrays that skepticism not as a legitimate intellectual position but rather as only a product of Vivian’s deep personal unhappiness. She regrettably has a Dumpy Lesbian flunky whose character is never realized in any way. We also get the Trustafarian hippie whose freethinking craft shop is financed by his father’s hedge fund, and the Black Hooker with a Heart of Gold, an employee at the “Your Welcome Spa,” available to lend an empathetic ear to Alice and provide cheap laughs. It should go without saying that these characterizations are lazy and much too familiar, but apparently it needs to be said. Again.

The other flaw with the film is central to its premise and underlined by its execution. In order for any film to succeed, in any genre, there must be something real at its heart. But here, there’s no real-world analogy for the central conflict. Vivian is on a crusade against marriage itself, and all the other characters are the victims of her machinations as she seeks to undermine their marriages for the sake of her documentary. The trouble here is that no one in the real world is trying to destroy the institution of marriage. Quite the opposite, in fact, as enormously powerful religious and political forces seek to “defend” it by shoring up its exclusivity to straight people. So when various characters gang up on Vivian in a “Hurray, marriage!” scene, complete with speeches about their devotion to one another and an onstage proposal (!), it feels dangerously close to a Focus on the Family promo video. It’s almost like watching Pat Robertson and the 700 Club try to take down Stephen Fry.

The thing that rescues the film at this point is the fact that we’ve grown so invested in the happiness of the couples involved. Bell has skillfully convinced us that these people belong together—despite all their differences and difficulties. Ultimately, it shouldn’t matter whether there’s a state-sanctioned blessing on their unions, and so when the couple in the open relationship decides to tie the knot, it does feel a little like an unfortunate rejection of the many non-marriage forms of love available in the world. But the fact is, these nice people are happy now, and their tenderness toward each other really is a joy to behold. In a world fraught with failures of empathy and short on mutual understanding, it’s good to have a reminder of what gentle mutual regard can look like.

I Do . . . Until I Don’t opens Friday, September 1, at AMC Alderwood, AMC Pacific Place, and AMC Seattle