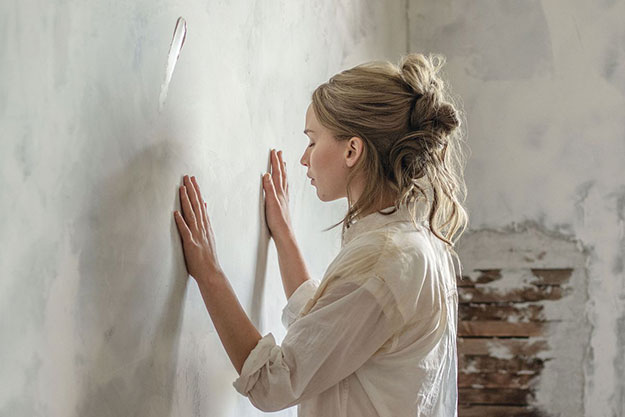 Give credit where it is due: it is rare to find any studio film this brazenly and recklessly self-confident in its own twisted and sick artistry, especially when carried out to the logical extremities of the subject matter, both literal and allegorical, without an iota of care for good taste. To be clear, mother! is a horrifically awful film, dull when it isn’t completely repugnant and so blatantly up its own ass that it becomes almost bemusing in its complete arrogance. But it is fascinating nonetheless, not the least because it has divided critical opinion so sharply and along entirely unexpected battle lines, but because the movie has somehow, through some alchemical combination of intention and luck on the part of Darren Aronofsky, managed to be both asininely clear and completely opaque in the ways it can and has been interpreted.

Perhaps the establishment of a film’s premise is a fool’s errand for a film like mother!, but it is useful nonetheless. The movie is centered around a woman (Jennifer Lawrence) married to a slightly older acclaimed poet (Javier Bardem) living in a house seemingly in the middle of nowhere – indeed, the woman, and by proxy the film, never leaves the house. He is busy grappling with a bout of writer’s block, while she is renovating and rebuilding the house after a fire that occurred in the house – which was the husband’s before he met his wife – an unspecified number of years ago. Their fairly idyllic existence is interrupted by the unexpected appearance of an ailing doctor (Ed Harris) and his wife (Michelle Pfeiffer), who ingratiate themselves into the household by praising the work of the husband despite the protestations of the wife. From there, multiple turns occur, including a brief interlude before the movie culminates in a truly horrendous and apocalyptic third act free from any sense of coherent logic or structure, which will not be spoiled in this review. 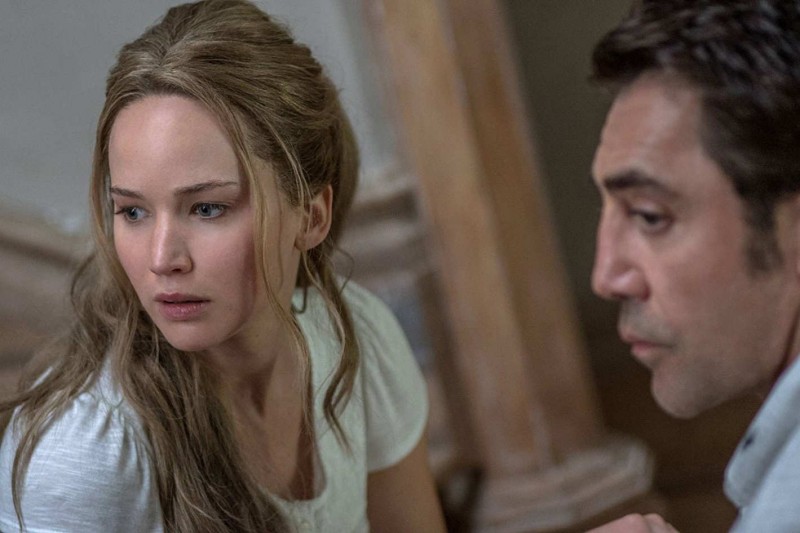 But before the narrative and thematic implications can be discussed, it is worth taking into account the filmmaking with-a-capital-F that is on display here. I must confess to not having seen a full Aronofsky film prior to this, so I can’t speak to any stylistic continuity (though comparisons have been made to his The Wrestler), but for the most part mother! is a movie carried out largely in extreme close-up. Shot by regular collaborator Matthew Libatique on 16mm, it is a staggeringly ugly effect: when the camera pauses from its careening handheld tracking shots glued to the front or back of Jennifer Lawrence’s head, the faces are almost distorted, no more so than when the camera is so close that it cuts off the forehead and chin of its subject. It is less immersive than annoying, especially coupled with a truly overbearing sound design in place of a traditional score, which wrings every creak, every tinkle of the wind chimes for all its worth.

However, one of the many curious things about mother! is how little it seems to care about what is expected of a “normal film,” here referring to the psychological thriller template, with an accompanying style guide to match. Though there are at least five too many jumpscares, much of the movie is played for deadly silence, which only occasionally succeeds in sustaining tension. Harris and Pfeiffer, with their overtly dangerous charm and impositions, seem to be acting in an entirely different film from Lawrence and Bardem, and the film seems to markedly improve whenever the latter two are the only people on screen. There are no compositions or scenes constructed in the usual discrete sense, and while the effect may be marginally thrilling at first, it quickly becomes enervating, as there is less a feeling of mounting dread than stupor punctuated by jarring moments of true terror.

As the reader may have noticed, none of the characters are named either on screen or off; the credits consist of such titles as mother (Lawrence), Him (Bardem), man (Harris), woman (Pfeiffer), cupbearer, younger brother, herald, older son, etc. Besides serving the heavily allegorical aspects of the film, it provides for an entirely (presumably) unintentional point of comparison with one of 2017’s other most ambitious and ultimately misbegotten films, David Lowery’s A Ghost Story. Both seem to be drawing heavy influence from other well-known auteurs and filmmaking styles – Lowery from slow cinema, Weerasethakul, Tsai, etc., Aronofsky from Polanski in topic and the Dardennes in style – while continuing their director’s own style and making their own grand statements about the nature of existence. The difference here is that while Lowery’s film, however flawed, is ultimately one of hope and love, while Aronofsky’s is one of nihilism and tasteless provocation – though one could easily argue the movie is about a very different and twisted version of love.

mother! really is a film of multiple interpretations, with the only point of agreement being that there is a blatantly obvious allegory. Many have espouse the theory (which I find highly suspect and even lazy) that it is based on the Bible. Others have suggested it is about climate change or the toxic nature of the creative artist as some sort of god. As for myself, it feels like a mishmash and failed attempt to restage all of human history, a cycle doomed to repeat itself. The movie does and doesn’t lend itself to all of these interpretations, all of which seem totally obvious to some and completely idiotic to others. The point is that mother! seems to be a film at war with itself, too caught up with its obsession with ideas and thrills that it forgets to care about coherence and clarity of purpose. To some, that quality is groundbreaking and worthy. To me, it is simply awful.