The Future//Present program at VIFF has quickly become one of the most dynamic and interesting streams the festival has to offer, adding to the festival’s longtime commitment to the cutting edge in Asian cinema an exploration of the burgeoning Canadian independent film scene, offering showcase opportunities to young filmmakers from Nova Scotia to Vancouver. This year’s program was even better than last year’s inaugural offering, and provided some of the festival’s most interesting, engaging and challenging films.

Last year’s program was lead by a feature and a trilogy of shorts from director Sofia Bohdanowicz, who returns this year with her documentary Maison du bonheur. Filmed on a Bolex over 30 days during a stay with a friend’s mother in Paris, the film is both the story of a woman and the way she does things (makes bread, gets her hair styled) and the story of a woman making a film about a woman she finds fascinating. While not as explicitly meta-cinematic as Never Eat Alone, Bohdanowicz continually leaves in her own attempts to erase herself from her movie (telling her subject how to answer questions when the questioner won’t be heard, or telling people not to look directly at the camera or acknowledge her presence), and at times simply can’t help but take it over, including snippets of her nightly audio journal entries, or taking a side trip to Deauville, the site of some unexplained unhappiness in her past, for which this trip, this film project, seems in some way designed to, if not exactly erase, then somehow compensate for: she wants new memories. It’s a warm, fascinating film from one of the best young filmmakers in the world today. 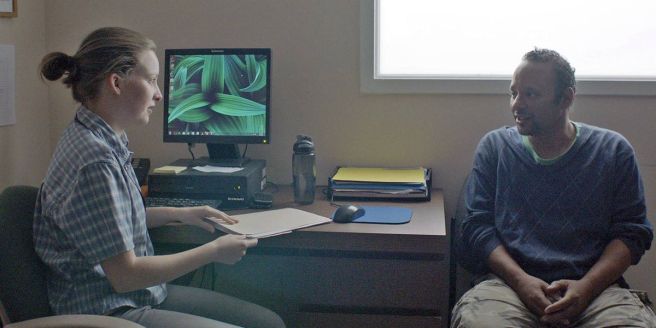 Fail to Appear stars Deragh Campbell as a young social worker attempting to connect with a young man after he’s been released on bail pending a court hearing. The first third of the film follows Campbell at work, the film more or less explicitly modeled on the style and rhythms of Frederick Wiseman’s work. The second sees Campbell and her client Eric (Nathan Roder) in court and then awkwardly meeting for ice cream and taking the train, Campbell ineffectively trying to connect with the distant and withdrawn young man. The final third follows Eric at home over the next couple of days: we learn he lives in the basement of a new house owned by his mother and step-father, all of whom seem very nice, and is an excellent musician. We don’t know if he’ll show up for his court date. Campbell is terrific, as she was in both of the films she had in Future//Present last year (The Intestine and Never Eat Alone). With these three films along with the fantastic short film Let Your Heart be Light which she co-starred, co-wrote and co-directed with Sophy Romvari, which is playing here at VIFF in the shorts program, Campbell is quickly becoming the Parker Posey, Steve Buscemi or Greta Gerwig of Canadian independent cinema. Director Antoine Bourges shows a light touch wth what could be overwhleming social realism, and the result is a tantalizingly slippery film about a world where everyone means well but still the system fails. Also apparently judges in Canada are addressed as “Your Worship”. 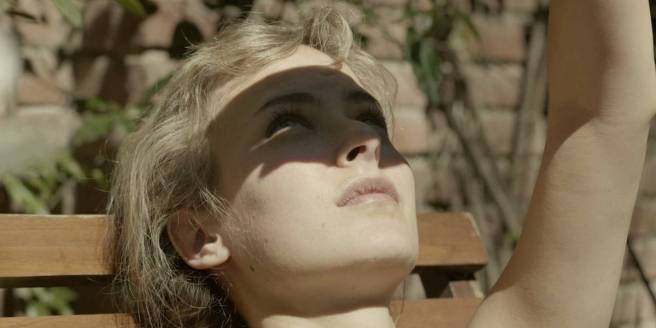 Cory Bowles takes a much more direct approach to indicting political reality with his Black Cop, in which Ronnie Rowe, Jr, playing the eponymous black cop, is racially profiled while jogging one night (like Terry Crewes in a recent episode of Brooklyn Nine-Nine) and the next day goes on a rampage of inversion, harassing middle class white people to the point of violence (stuffing a bad cop into a dumpster, pummeling a doctor with his baton) but non-fatally. The point is well made, the driving soundtrack and Rowe’s fiery performance sell the film’s urgency, but ultimately Bowles pulls his punches. I was longing for the Black Cop (this is the only name the character is known by) to turn full Bad Lieutenant, to take the contradictions and insanity of race in (North) America beyond the extremes of basic Canadian niceness. Also somewhat of a missed opportunity is Sophie Goyette’s Still Night, Still Light, which for the first hour or so is as good as anything in the festival, but then continues on for another 45 minutes. That first section follows Éliane Préfontaine as Éliane, a young woman who failed to get into music school (despite her talent she never learned music theory) who works odd jobs around town (as the film begins she plays Elsa for a young girls birthday party). She wanders the streets, music in her head and the camera close behind, a young woman not knowing what to do next. At best, these scenes recall no less than Millennium Mambo. Eventually Éliane moves to Mexico, where she gets a job as a piano teacher for a young boy and befriends the kid’s father, Romes. Romes and Éliane eventually take a boat trip in the fog, dreamily reminscing about the people and lives they’ve lost. The last two parts of the film, about Romes and his father, Pablo, and their trip to Shanghai are less interesting, possibly because neither actor is as compelling a screen presence as the gorgeous Préfontaine, or maybe because their crises, coming at the middle or the end of life, simply feel more distant.

Blake Williams’s experimental 3D epic PROTOTYPE has been bending minds at festivals all autumn (it previously played Locarno and Toronto), so it was a bit of surprise to see a film with this much buzz around it in Future//Present, but that’s not to say its place is undeserved. Manipulating eyeballs and twisting brains to, kind of, tell the story of the Great Galveston Hurricane of 1900, Williams positions us in the past with a series of more or less conventional stereoscopic images before hurling us into the heart of the tempest, walls of water swirling over and around us. The film becomes increasingly abstract, as archival images of all sorts are filtered through the monitors of ancient television sets then fried by 3D technology, all accompanied by a horrific drone. It’s a terrifying vision of an apocalypse and its aftermath from the inside. Matthew Taylor Blais’s Forest Movie is a more conventional kind of experimental horror film: a young woman journeys into the woods, drawn by a vision of light and trees in a dream. She walks for a long time until reaching an idyllic spot, where she sets up a chair and sits, us along with her, for a thirty minute long-take of stillness, the only movement coming from shifting light or the sounds of unseen hikers and birds. The durational exercise recalls the finals shots of Tsai Ming-liang’s Stray Dogs, though without the narrative apparatus of two decades worth of backstory that lead up to and inform Tsai’s shot, Blais leaves us free to let our mind wander where it will, staring at an image of nature as we might at actual nature itself. That the frame slowly expands while we watch is an interesting choice, one I didn’t notice until the image was a full 16×9 (just as I failed to watch PROTOTYPE while alternating closing one eye than the other eye). In end, the film takes a sinister turn, as night falls the forest, place for quiet contemplation (or napping, YMMV), becomes a trackless expanse of darkness, our heroine having lost her way while the camera’s close following and the sourceless ambient sounds become increasingly threatening, like the chase sequence in Snow White and the Seven Dwarfs. Gimmickry aside, the film is an effective evocation of a primal location, the forest as mystery itself, the unknown, for all the hope and wonder and terror that implies.