Jane Campion’s most recent project, Top of the Lake: China Girl, a follow-up to Top of the Lake (2013), is a 6-hour, episodic journey that premiered, variously, at Cannes, on the Sundance channel, and, played, most recently, at the Vancouver Film International Festival. It is, as its length and as its screening venues suggest, difficult to pin neatly into a category. Is it a gorgeously shot TV show? A very long film? Campion and her work, as usual, resist tidy classifications of all sorts.

Does her work represent “female annihilation in bonnets,” as BBC Radio 5 film critic Mark Kermode once suggested, or is she definitely a feminist director, her work “emphasiz[ing] and almost perverse figuration of female strength” as Professor of Film Studies at University of East Anglia, Yvonne Trasker has said? Campion herself has championed women and women filmmakers, quoted as saying in an 1993 Cahiers du Cinema piece, “I think I know things about women that men cannot express.” And yet she “bridles” Virginia Wright Wexman notes in Jane Campion: Interviews, “at being narrowly identified as a feminist filmmaker,” and Wexman cites Campion as saying, “‘I think it’s quite clear in my work that my orientation isn’t political or doesn’t come out of modern politics.’”

Ultimately, it’s Campion’s work’s resistance to all kinds of categories, feminist and otherwise, that thrills me most. She does feature vibrant, strongly characterized women and female relationships in all of her films – sisters, mothers, daughters, friends – but her women are messy, often complicit in their own oppression, often loving men that oppress them. She often, too, defines, examines, and explores the patriarchal structures that surround her female characters, exposing those structures as destructive and abusive, and yet her men are messy, too, rarely simply openly misogynist without also being one some level complex and sympathetic.

Top of the Lake: China Girl, like Top of the Lake, similarly invites us into the lives of messy women and men, lives specifically filtered through the lens and the experiences of the female protagonist, Robin Griffin (Elizabeth Moss), a police detective, who must navigate her way, bearing brutal scars of a her past, through a patriarchal world of policemen, who often see sexual harassment as flirting and who continually diminish her status as an officer because of her gender. The overarching story, ostensibly, is a police procedural: the body of a young, unidentified Asian woman stuffed in a suitcase washes up on the beach in Sydney, and Robin is assigned the case. The essential plot, then, is a whodunit; who is the victim and who is the killer?

The story, though, in classic Campion-fashion, is not necessarily fully interested in these questions; they are, indeed, important, but equally important is Robin Griffin’s personal journey. The suitcase with a dead body, is not the only dead body haunting the waters of the city, not the only kind of dead figure washing up into Robin’s life. Her past, haunted by sexual assault, trauma, death, and family secrets, relentlessly breaches her present; her work brings continual reminders of what she herself experienced. Ghosts will not leave her alone and seem, even, to take on corporeal form, again and again, in her police work, in the men and women she meets.

Campion, in fact, seems in a way to embrace a sort of magical, or perhaps mythic, kind of realism. There is nothing overtly magical about the story – in fact the grittiness of the drama is sometimes unbearable in the way police dramas often are, exposing, as they do the most depraved human impulses – but the characters and certain actions often seem larger than life, at least, characters do not behave or speak in strictly realistic terms, do not operate in situations I can fully imagine happening in real life. In one scene, a man who seems to be paralyzed, walks and attacks someone, and his sudden ability to walk is left unexplained. (It’s a fabulous scene – the lack of explanation adding to the visceral horror.) In other scenes, a lesbian French professor seems to speak strictly in the language of feminist theory, rather than in everyday language. (It’s absurd and funny and, simultaneously, profound.) In another scene, a forensic pathologist takes on the unlikely demeanor of a therapist, offering rather impossibly intimate and wise advice to a police officer.

None of this really makes sense to a viewer expecting the kind of realism – or TV realism – we’ve come to expect in police dramas. Even Robin Griffin, whom we’re rooting for, supposedly a very good police detective, doesn’t seem entirely methodical and certainly often swings into wildly unprofessional behavior and relationships, relationships that, surely, would legally compromise her ability to pursue a case professionally. 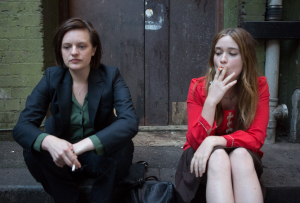 But if we can move past the possibly outraged protests our literalistic, indignant minds often make when they encounter things that are outside the norms we are used to, Campion invites us to see more than just a police procedural. The characters here are both highly specific and deeply intimate; we get a look into their lives and emotions that no regular police procedural offers. In one scene, Robin meets someone who is, to her, a newly discovered family member. It is an encounter full of shyness, awkwardness, tenderness, abrasiveness, and emotion. It is revelatory – specific, exactly, to these characters and who they are, and as such, for me, one of the most moving scenes of the cinema year. But the larger than life, not-quite-realistic, quality of Top of the Lake also invites us to consider these characters as, in some way, mythic: characters who represent descriptions and explanations for who human beings are, for why they behave in the ways they do. The film, through its equal embrace of specificity and expansiveness, becomes all the more something that gets under my skin, and then, inside my emotions, and then, it moves outward into my understanding of the world and others.

My first response, after consuming all six hours of the drama, was purely emotional; it’s the sort of thing that reaches down deep into one’s bones and etches its mark there in ways that are hard to express. And so, I’m not sure that words, particularly in essay-form, will ever do Campion’s cinema justice. (But then, of course, words never do any cinema justice.) Of course, the experience of the thing itself – its images, sounds, and language – must be experienced for itself. Words in a review don’t work. But perhaps, my first written response to Top of the Lake: China Girl, a poem of sorts, which offers guttural half-thoughts, more than fully, coldly articulate ones, is the best, ultimately, I can offer here to a reader.  Read them, if you wish – and then go watch Top of the Lake.

By the lake of myths, at the top of the world,
where stories of monstrous origins are told,
a wedding dress burns in effigy
This Adam and Eve are dead

But the ocean by the city, too,
belches out more dead
refusing it a burial

And the blond man with a plastic face,
a spectre on motorized wheels,
pushes forward,
rises slowly, relentlessly,
strips off his belt and strangles the living
The flames rage, he ravages,
until she screams him back to oblivion

How many girls have been strangled into death?
Their necks a smudged bruise-line,
while they walk past men who jeer
or leer
and decide to make a purchase

A China Girl,
dead or alive
It doesn’t matter to him

The belly is a mythic ocean, too,
giving up its dead and its living
How many babies haunt the mothers,
and ghostly, stumble around night beds?
How many baby-forms haunt the barren–
fantasies that never cry?

Some babies are the dead who dog the living
Some are a hollow who fill shuddering minds
And some grow up,
dancing, beautiful, capricious,
loved but never owned, however mother-arms reach out
There is a kind of death in letting living babies go

These are the myths,
a Story 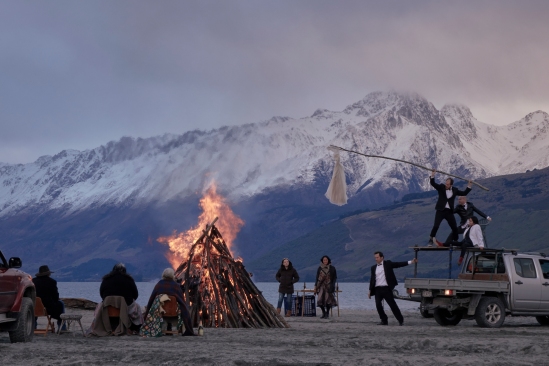