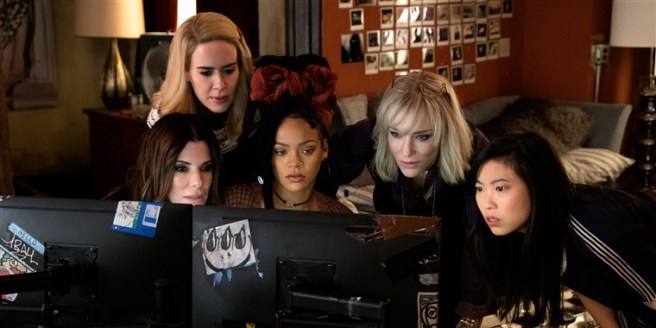 Ocean’s 8, the latest film in the celebrity heist movie series, was not directed by my personal boogeyman Steven Soderbergh, and so it was safe for me to watch. And safe is a good word to describe this wholly artificial construct of Hollywood froth: it is entirely what you’d expect it to be and mostly harmless. Like the first Ocean’s (I haven’t seen 12 or 13), the new one gathers an impressive array of movie stars for some glitzy thievery, the primary pleasure of the film residing in watching beautiful people hang out and enjoy the beautiful objects that accompany fame and fortune. As a heist film, and also like Ocean’s 11, it trades suspense for surprise, and thus is a shallower, less interesting film than it could be, and it also avoids the cynical cool that made the original, 1960 Ocean’s 11 such a classic. It’s the very definition of crowd-pleasing, eminently forgettable Hollywood product.

Sandra Bullock plays Debbie Ocean, brother of George Clooney’s apparently deceased Danny. She gets out of jail and immediately puts in motion her plan to steal a diamond necklace worth $150 million from the Met Gala (Cartier surely contributed a hefty sum to the film’s operating budget for its glamorous product placement). To this end she puts together a team of woman (all women, she insists, for reasons): Cate Blanchett, Helena Bonham Carter, Rihanna, Sarah Paulson, Mindy Kaling, Awkwafina. They are to convince a movie star played by Anne Hathaway to wear the necklace to the gala, where they will lift it off her under the eyes of security cameras, hired goons, dozens of fashionably famous folks and the ever-present media. The team-gathering and heist preparations are slickly scored with faux-Mancini beats and accompanied by half-felt split-screen wipes. One gets the impression that director Gary Ross is merely imitating Soderbergh’s stylistic flourishes, a paint-by-numbers facsimile of what was already an empty imitation. But the stars, gorgeous and charming as every one of them is, carry it along with infectious goodwill.

The heist itself plays out with a decent amount of tension, less reliant on surprise twists than in Soderbergh’s film. The best heist movies are built on suspense: they tell you exactly what the plan is going to be, then drag you second-by-second through every step along the way, filling the audience with dread at every misstep or every accident, necessary improvisations taking on a life or death importance. Ocean’s 8 never really explains its plan, though most of it is easy enough to figure out. There are some annoying twists, and half-baked attempts at giving Debbie a revenge motive to make the plot somewhat interesting on a personal level (which in truly pointless Hollywood style Blanchett adamantly opposes in one scene only to beamingly approve of in the next). The insurance investigator played by James Corden is kind of funny, but seems to miss some blindingly obvious evidence. The movie is best when it focuses on the crime and is blessedly free of the kind of non-sequitor improv humor that dominates contemporary comedy (save for a brief scene of Awkwafina explaining to Kaling how Tinder works). But whatever. Ocean’s 8 is a perfectly pleasant way to spend two hours in an air-conditioned room and in a week I will have forgotten everything about it.