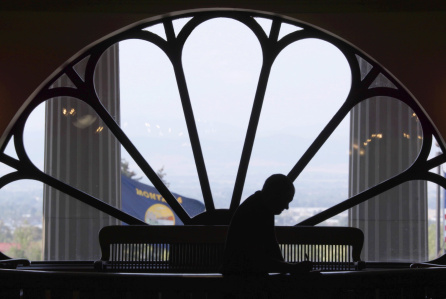 As the opening credits come up on Kimberly Reed’s powerful new documentary, we see shots of the remarkable beauty of the natural landscape of Montana juxtaposed with startling images of the human and environmental devastation produced by mining and petroleum companies’ aggressive and essentially unregulated extraction practices. Reed here shows us in microcosm what we stand to lose as a nation if corporate and industrial power is left unchecked. Juxtapositions like this form the structure of the film that ensues, which alternates between the hopeful and the deeply discouraging as Reed pursues her thesis: Untraceable “dark money” political campaign contributions and the corruption that they foster constitute a grave threat to American democracy. A documentary on this subject, while essential, could easily become a tedious screed, of interest only to policy wonks and activists. Reed, however, finds the humanity and the drama in her subject, creating a clear, compelling, and surprisingly even-handed case that citizen vigilance is more important now than it has been in decades.

Reed uses her home state of Montana as the lens through which to show us her subject, introducing us to the people who are directly touched by public policy. As the film opens on a wide shot of a farm in Big Sandy, we meet two hard-working farmers, husband and wife, who hover over a broken piece of farm equipment and murmur to each other about how or whether to try to fix it. “This is gonna be a mother sonofabitch,” mutters the man as he grimaces, takes off his ball cap, and rubs the back of his head, beads of sweat gathering on his ruddy face. Finally, he gamely if unconvincingly declares, “It’s fine, uh, yeah,” and text appears on the screen: “Jon Tester, U.S. Senator, Montana.” (It turns out that, in Montana, politicians have a tradition of keeping their day jobs.) With this moment of surprise, Reed cannily humanizes the figures who create public policy; some, she reveals, are also themselves deeply, personally affected by it.

This humanizing is a trend that continues in the film as we meet other public servants, both Democratic and Republican. A candidate for state legislature, Debra Bonogofsky, reminisces about how hard it was for her, a shy introvert, to walk door-to-door for her campaign, “talking to people I don’t know!” Montana Senate President Jim Peterson runs a “mobile office” out of the bed of his pickup truck. Others—a teacher, a shopkeeper, another farmer—speak compellingly about their wish to make a difference in their work in politics in the same way they do in the classroom, on Main Street, and working the land. Acquainting us with these people is an engaging way for Reed to disabuse us of the notion that politicians exist in a vacuum away from the rest of humanity—and it tacitly but directly challenges the notion that experienced public servants inhabit a “swamp” that must be “drained.” Lest the film lapse into an uncritical, “politicians are people, too” PSA, however, this opening also furnishes an important contrast with the rising class of other politicians, PR flacks, fixers, corporate donors, and anonymous, invisible policy drivers—all tainted by “dark money”—who descend to shocking ethical lows in order to unseat their political opponents and install themselves in positions not in service but in power.

The problem of “dark money”—large, untraceable, anonymous political contributions protected as “free speech” by the Supreme Court’s Citizens United ruling of 2010—is not one that has been much in the public conversation in the last two years as Americans have been busy contending with the chain of surreal daily crises that constitute the current political moment. But Reed’s documentary makes the case that perhaps it should be. Former FEC chair Ann Ravel notes, “Campaign finance reform is the gateway issue to every other issue you might care about.”

The film illustrates this amply. After all, as Ravel explains, dark-money politicians stack the courts with corporation-friendly justices, who then issue rulings that allow corporations to do, as one citizen puts it, “whatever they want,” which leads to unchecked industrial and commercial practices that damage the natural environment, harm human health, disregard human rights, and limit individual freedoms. A compromised political process also results. We watch as dark money groups use revoltingly underhanded tactics to anonymously smear their opponents with falsehoods and swing elections toward candidates who will be in the pocket of their corporate donors. Fake nonprofits like “Mothers against Child Predators,” for example, target one Montana candidate by mass-mailing flyers falsely (and bizarrely) linking him to murderer John Wayne Gacy (who, someone points out, never even set foot in Montana). Another front group hosts a fake “town hall” in order to disseminate gross falsehoods about an opponent, duping citizens into believing they were going to hear “both sides” about local issues. Miscellaneous front-group flyers on display would be laughable in their obvious and ham-handed manipulations if they weren’t so effective, swaying enough voters to install the worst mediocrities in office and on the bench.

To answer the charge that such nastiness is “just politics,” the primary investigative journalist featured in the film, John S. Adams, reminds us that “it’s not politics—it’s corporations.” Politics is simply the mechanism by which corporations replace democracy with kleptocracy. The courts have made it legal, he observes, “to bribe politicians.” The ensuing parade of lies and manipulations revealed by the film would be overwhelming but for Reed’s attention to the possibility of resistance. One of the film’s more heartening moments occurs when a citizen realizes that the “town hall” is a scam, stands up, and loudly explains to those around her that the event is fake, causing an exodus from the building. As people begin to leave, another woman shouts, “I thought we were going to hear both sides and do some critical thinking!” When confronted, the event organizer feebly mutters something about “different definitions of ‘town hall.’” The moment is a minor triumph for local democracy. It raises the possibility of something similar and profoundly necessary happening at a national scale.

While other recent political documentaries have trod similar ground (Merchants of Doubt, Requiem for the American Dream), this one is particularly timely, and particularly troubling. As the film proceeds, it is inevitably dismaying to see many good people—public servants and investigative journalists and ordinary citizens—be defeated by massive, impersonal forces in the eight years since the Citizens United ruling. Because the courts have been stacked and the law currently allows the corporate bribery of politicians, the film suggests that it’s unlikely that anyone who engages in serious ethical violations will be brought to justice. Despite the fact that we now know (thanks to this film and a few dedicated investigative journalists) how local politicians like Art Wittich and state politicians like Scott Walker rose to power, the courts will not remove them from office. The film closes with a discouraged Ann Ravel reading her resignation letter aloud. She says to us that the corruption around campaign finance is “test case” for dismantling American democracy. In a statement with of-the-moment national significance, she comments that we don’t know if there’s foreign money in dark money groups shaping election outcomes—but that “there probably is—there’s probably a lot.”

It’s essential to be aware, as this film helps us to be, of the gravity of the present moment and the twisting path that led us here. It’s also essential, however, to heed Ravel’s galvanizing closing statement: “The only way our political process will change is if people voice their anger” about it. Dark Money ultimately leaves us with a challenge: Do we let Citizens United and the resultant dark money-fueled campaign corruption stand, or do we ourselves stand to challenge the corruption? The film shows us that resistance takes many forms and that sacrifice can bear fruit. After the corporate take-over of his former newspaper, journalist Adams sold his home and lived out of his truck so he could continue to do investigative journalism—which he does to this day. Of the film’s central issue, he says, “This is the proving ground now for the American experiment.”