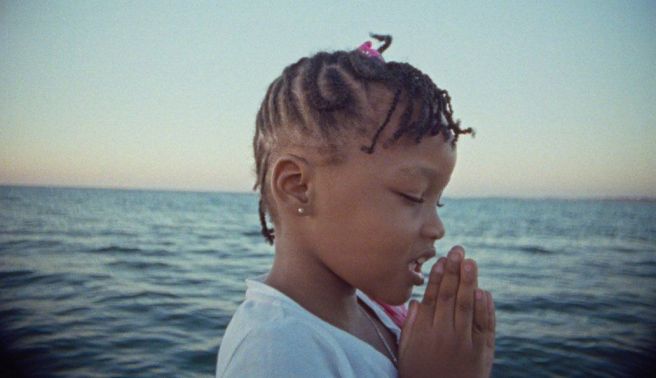 In Khalik Allah’s debut documentary, Field Niggas, the focus was precise. He returned again and again to a single street corner – the power of the film derived from his commitment to capturing this environment, the specific light, and the people who roamed about. His camera was up close to his subjects, his gaze meeting them head-on. His follow-up, Black Mother, is in every sense a much more expansive, diffuse experience. Instead of a single street corner, he aims to capture an entire country.

The approach is the same – the images and sound are not synchronized, allowing for a certain abstraction, where the viewer can make associations and connections for themselves. But Black Mother is a much more challenging project, and this is because of a crucial difference. In his first film, Allah was able to focus on his gifts for portraiture and his background in photography. His subjects became his organizing principle, and their presence sustained the film’s logic and atmosphere for over its running time. It never felt forced. Its scope felt right. Faced with the whole of Jamaica to try and make sense of, Allah strains in organizing his material. The film is divided into four sections – three trimesters and a birth. Searching, he forces poetic motifs and associations in order to guide him. His subjects hold books to point to the island’s colonized past. School girls are juxtaposed with prostitutes. Water imagery abounds. There is death, and there is birth. Essentially, the design feels less intuitive, a solution to a problem.

But Black Mother does not feel programmatic or calculated, even if Allah’s structure is somewhat labored. This is because his approach remains open, allowing for dissonance. Think of the Chinese store-owners brought up early on in the film. The voiceover speaks to Chinese people buying up hotels and taking over Jamaica, a new colonization. To illustrate this Allah shows us some Chinese store-owners at work, frustrated, tired, reacting to his camera, and finally giving him the peace sign. The montage is conflicted, and it reminds one of his previous film and its treatment of the police. In that film, Allah voiced his opinion of the police, filming them with as much as respect as his other subjects, but his voice became one of many, and all throughout the film his subjects violently disagreed and said so. With the Chinese store-owners, he strives to complicate and elucidate this subjects’ voiceover through the imagery, finally arriving at a point where it simply remains inconclusive – how should one feel about this? There is contradiction and the note is left unresolved.

In Field Niggas, Allah was frequently on the soundtrack, asking questions, his reflection was seen on bodega storefronts; he became a part of the night, a member of the cast, his voice a part of the film’s choral patchwork. While his latest film incorporates footage from his own family, and part of the impetus for filming Jamaica is his own connection to it, aside from a few stray bits of dialogue and an image here or there, he has more or less removed himself from the film’s universe. This allows for an analytical distance toward his subject, submerging the images of his family in a grand design, just another people of the island, allowing him to develop the thematic framework he feels is necessary to do justice to what he feels is important. He no longer needs to be seen or heard for his presence to be felt, letting his camera distance carry the moral weight of his gaze. The montage becomes his tool – the structure allows him to search and understand, maybe even flail about a little bit.

We return to the structure, the trimesters and the birth. In the first three trimesters, he has given us a societal and spiritual context, returning again and again to Jamaican Woman. His metaphor is undoubtedly a male one, he frames himself as Son to Mother, his return to Jamaica an attempt to understand his roots, but it registers as respectful and his gaze is never compromised. Finally, Allah films the mother give birth to a son, images of running water flowing everlasting, while the mother cries in pain, making literal the struggles of all the women he has filmed so far, the prayers heard on the soundtrack earlier signaling a spiritual rebirth, not only for himself but for all of those on the island. It’s in moments like this where the structure pays off and Allah’s desire to capture it all almost feel possible.

Black Mother is currently playing at the Northwest Film Forum

cinephile and filmmaker based out of Dallas, TX. View all posts by Jhon Hernandez