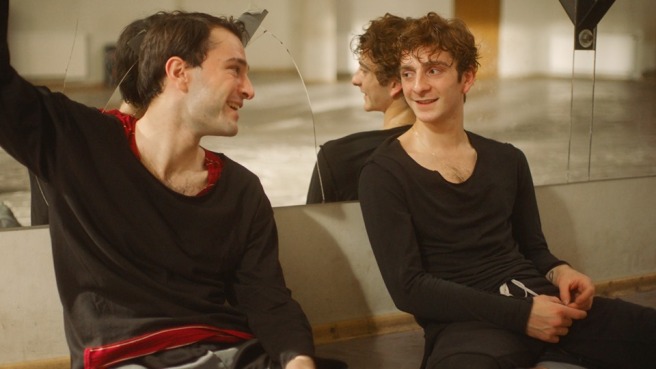 Levan Akin’s gorgeous coming-of-age tale And Then We Danced fairly glows with beauty, pain, hope, and joy. It is a thoroughly transporting film, one that makes you wish that you were part of its hero’s world instead of being a mere observer.

And Then We Danced is set in the nation of Georgia and features the hauntingly beautiful dance and music of traditional Georgian culture. The film follows Merab (Levan Gelbakhiani), a college-aged member-in-training of the National Georgian Ensemble, a troupe specializing in traditional dance. Merab has been chastely dating his dance partner, Mary (Ana Javakishvili), with whom he was first paired when they were just children, and the two have an easy, playful rapport that comes from many years of knowing each other and dancing together. If Mary suspects that her partner is gay, she keeps that suspicion under wraps until the truth becomes too obvious to ignore—which it does when a new dancer, Irakli (Bachi Valishvili), suddenly arrives from out of town and begins to claim more and more of Merab’s attention. Irakli is dashing and mysterious, and Merab is soon utterly fascinated by him. A relationship that should proceed apace, however, is complicated by the fact that both young men live in a sternly judgmental culture where being gay is a criminal offense. Further complexities arise when auditions are announced for a single, prestigious position in an ensemble piece, a position for which Merab and Irakli find themselves competitors.