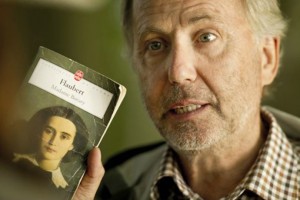 The premise of the newest film from director Anne Fontaine, Gemma Bovery, holds a good deal of promise for lovers of both the cinematic and the literary, particularly for those who welcome witty or playful re-tellings of classic works of literature. Adapted from Posy Simmonds’s graphic novel of the same name (a novel originally conceived as a serial in The Guardian), the film’s story centers around perceived parallels between the literary characters in Gustave Flaubert’s Madame Bovary – particularly Emma Bovary, her husband, Charles Bovary, and Emma’s lovers –  and the film’s characters. When Gemma Bovery (Gemma Arterton) and her husband, Charles ( Jason Flemyng), move from London to a small town in Normandy, the town’s excitable, bourgeois baker, Martin Joubert (Fabrice Luchini), is certain Gemma is the real life equivalent of the fictional Emma, and he makes it his mission to discover her in love affairs and prevent the tragic suicide that plays out in the novel.

Such a set up has all the ear marks of wonderfully droll farce or of a sly satire, a satire that could work on any number of levels – critiquing, perhaps, the often fraught French-English relationship; or the middle class, provincial prejudices; or literary pretensions; or male-female relationships.  The premise also suggests the story might hold some genuine pathos, a tender examination of love, heartbreak, and misunderstandings, perhaps.  And by many accounts (here’s one, for example), Simmonds’s original work does function on all those levels. (After watching the movie, I immediate ordered the graphic novel.)

The film, however, while suggestive of those things, never quite coheres. It contains farcical elements, a bit of satire, and some pathos, but the farce never goes far enough to be funny, the satire is never sharp enough to skewer, and the pathos is never deep enough for profound emotion.

To be fully a figure of farce or satire, for example, the baker, Martin Joubert ought to be a good deal more pompously ridiculous than he is. There’s room for such ridiculousness in one scene where he clearly hopes to seduce Gemma by teaching her to knead dough (ah, swoon! such sensuous dough!) – or room in another scene where, with incredulous delight, he finds himself forced to suck bee venom from the small of Gemma’s delicious, but sadly bee-stung, back – or in other scenes, where he solemnly confides his suspicions of Gemma’s love affairs with his dog. 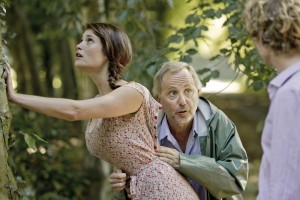 And, if not ridiculous, Martin’s assumptions about and idealizations of Gemma have the potential to lead to nicely sharp observations about the way a woman can be made more a thing, an object of desire, rather than understood as a real person. For if Madame Bovary is celebrated for its realism, a lively portrait of a complex, very human person, Gemma Bovery has the potential to demonstrate how easily a male writer or artist – a baker called Joubert, rather than a writer called Flaubert – can let his lusty imaginings get the better of his more humane reflections, being tempted into seeing a woman “Not as she is, but as she fills his dream” (“In the Artist’s Studio,” Christina Rossetti).

But as it falls short of satire and farce – it isn’t sharp enough or funny enough – the film also falls short of any genuinely perceptive commentary on Martin’s false dream of Gemma. It aims for such commentary by highlighting Martin’s misunderstandings about women (there’s one quite nicely comic moment of that misunderstanding right at the end of the film) and by showing us how quickly he leaps from small details of Gemma’s life to major plot points in the fictional Emma’s (Gemma’s fear of mice, for example, leads to Martin into a panic about a potential purchase of rat poison, certain Gemma will die in arsenical convulsions), but ultimately, its commentary is undermined by its half-hearted commitment to seeing Gemma through Martin’s eyes.  True, we see a good deal of her through his eyes, and it’s an often creepily voyeuristic vision of her – too creepy to be funny or insightful – but we see enough of her to realize that we are supposed to understand and sympathize with her more than we actually do. Ultimately, we are privy neither to Martin’s fully flawed vision nor to a fully complex vision of her. 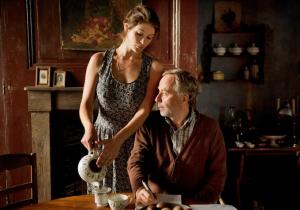 Still, Gemma Bovery offers a more or less entertaining couple of hours, however much I wish it were more committed to a particular viewpoint or more in control of its tone.  There are visual treats throughout – Gemma Arterton is lovely, Martin’s baked goods look delicious, the Normandy countryside and rustic homes are warmly inviting. I will continue to wish, though, for a film adaptation that offers something of the real satire and craft that Posy Simmonds’s novels apparently contain: neither Tamara Drew (Stephen Frears, 2010), also starring Gemma Arterton, nor this film quite get there.

Gemma Bovery opens on Friday, July 17th in Seattle at the SIFF Cinema Uptown  and in Bellingham at the Pickford Film Center.