The goofy, cutsy, CGI-driven, Chinese fantasy cancer melodrama we didn’t know we needed. The clash of tones I imagine would be unbearable for most, especially audiences trained on Hollywood rules about tonal and generic consistency, but it was a smash hit in China (and is still on-going) and managed an extremely rare third week in diasporic theatrical release here in Seattle. When I left the auditorium, I saw a woman sobbing uncontrollably, the guy with her trying in vain to console her. I can’t blame her at all. It’s silly and dumb and heartfelt and devastating.

Based on webcomics created by artist Xiong Dun as she battled her own cancer, Go Away Mr. Tumor stars Bai Baihe as Xiong, a 29 year old woman in Beijing. On her birthday she loses her job, finds out her boyfriend is cheating on her and eventually collapses in the midst of her birthday party, the first sign of her cancer. Relentlessly cheerful and adorable, Xiong develops a crush on her doctor, played by Daniel Wu (from the Don’t Go Breaking My Heart movies), and pursues him with a variety of schemes as her illness progresses from bad to worse. She befriends a couple of her roommates in the hospital: a young boy with a rough-looking single father and a hard-edged model that inspires fantasies of imperial submission. Xiong’s fantasies dominate the film, as it slips in and out of a digital world of movie parodies (The Walking Dead is a particular touchstone) and dreams of escape.

Particularly interesting in this regard is the difference between the use of digital effects in Hollywood and in the rest of the world. In America, the standard is verisimilitude, effects are used as a substitute for the real world (think the digital extras in Gladiator) and tend to be judged by how “realistic” they are. Computer effects that too obviously demonstrate their falsity are judged to be cheap or phony, they break the spell of audience submission and, in that vile critical phrase, “take us out of the movie”. In more bombastic cinemas (such as Indian or Chinese), however, that is not necessarily the case. CGI is utilized for breaking free of reality, creating a universe with no rules, one that can only exist in cinema. A comic book movie form Hong Kong or China actually functions like a comic book, rather than subdue the form’s innate versatility to the expectations of invisibility in the Classical Hollywood system. When Xiong is dumped by her boyfriend, she walks out into the cold Beijing streets, her sadness literally freezing everything, cars, buildings, people drinking coffee, she walks past. The camera pulls back to a satellite view of the city, ice creaking across its grid of streets and lights, then it dissolves into a shot of Xiong on a bench in front of a shopping mall, the lines and contours of the modern building matching perfectly the gridlines of the cityscape. It’s breathtaking and totally fake. 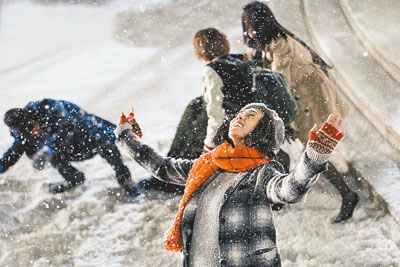 Unlike a film like the 2009 Zhang Ziyi romcom Sophie’s Revenge, similarly fueled by computer-generated whimsy, Go Away Mr. Tumor is grounded not just in the reality of its autobiographical sickness, and the touching portraits of Xiong’s circle of family and friends, but also in the city itself. The Beijing of Sophie could be anyplace in the world. But Xiong’s Beijing presents itself as a city of migrants (Xiong herself comes from the interior, as does one of her roommates, the father of the boy she meets is an itinerant laborer, his wife nowhere to be seen) of vast pressures from economic success, a striving to luxury that for most will be unattainable (Xiong has a gorgeous apartment, but she shares it with four other wildly overworked friends in their late 20s). The city’s omnipresent smog is nowhere to be seen throughout most of the film. But at the end, as the cancer finally begins to overtake her, it returns in a series of increasingly smoky cityscapes, the power of fantasy to obscure reality finally dissipating. It’s a crushing moment, an externalization of the movie’s simple but effective theme, on the power of optimism and joy in the face of destruction and hopelessness.

Go Away Mr. Tumor is playing now at the AMC Pacific Place.