“My face hurts all the time.”

Alex Ross Perry, in his new film, Queen of Earth, trains his camera on faces – and on interior and exterior spaces – in such a way that these faces and spaces take on an alien quality. The women’s faces are beautiful; the outdoor world location – shimmering water, sunlit leaves – is breathtaking; the rooms inside the film’s vacation home setting are spare and pleasing. But in the same way that a horror film might take a very mundane, ordinary space and fill it with inexplicable Otherness and dread, Perry’s efforts accomplish a similar effect. A lovely face, an ordinarily refreshing lake, a tastefully refined home – these all set my teeth on edge, or, at least, disrupt my usual sense of their essence. If horror is often a startling, unsettling defamiliarization of the everyday, then Perry’s film is that – and he uses discordant music, odd camera angles, and lingeringly long takes to achieve a sense of horror.  But comedy might be described in a similar way – for it sets something very ordinary in a new, surprising frame – and the thing becomes ridiculous, even hilarious. Queen of Earth straddles that line between horror and comedy delightfully, making it something like black comedy but evading that definition just enough – perhaps because there is a certain poignancy running through it all – to make it one of the most unique film experiences of the year.

It’s an experience that opens with a view of the teary, mascara-streaked face of Catherine (Elisabeth Moss) – it isn’t, of course, in this instance, cinema’s conventional version of a beautiful face, but it breeds discomfort more than it should. The camera’s insistence on her face is perhaps the source of the discomfort, for we are forced to look at it and look at it while she argues with someone – a boyfriend?  There is no reverse shot paired with the apparent boyfriend’s answers, no other face in the frame. And then the title card appears, her face, underneath and through it, announcing in red, old-fashioned, cursive script that this is “Queen of Earth” – “Copyright MMXV Her Majesty,” in little block letters underneath. A title, a name, a stamp – for the film or the person, or both, we aren’t sure, but it is, at any rate, a bold, word-conscious announcement, drawing attention to itself in ways that films rarely do at their outset anymore. That title – and that title framing – that odd juxtaposition of teary, serious face and red script title –  is it a joke?  Or something more serious?  I must laugh – but a little nervously. And the film begins.

Another face, as Queen of Earth unfolds, becomes as central as the regally named Catherine’s, that is, the face of Virginia (Katherine Waterston), Catherine’s close friend, who is hosting Catherine for the week in her wealthy family’s vacation home, in the wake of Catherine’s break-up with her boyfriend and of the death of her artist father.  In one scene – equally as provocative as the title in its unusual framings – the two friends trade monologues, and the camera sits first on one face, then on the other, working in oddly languid movements back and forth: at one time settling on a talking face; at another – even longer – on a listening face; at another on both at once – each face a partial thing. Long takes on talking faces are relatively ordinary – as long as we get a reverse shot here and there. Long takes on listening faces are more unusual, and the effect of such a take invites a new kind of scrutiny: what is the person inside the silent face thinking: Is she really listening? Was that a responsive smile or a grimace? (It looked like a grimace.) And that was a strange twitch.  Why is the face blank now? And, again, is she really listening? What, I have to wonder as a viewer, am I really looking at? (And am I meant to laugh at or be disturbed by this strange listening face?)

The speaker’s position in the scene, then, relative to the listener’s, is unusually equalized or even subordinated by the listener’s – and questions about the relationship between the two friends rise to the surface. What I see on the outside – that face, those faces – is not clearly linked for me to an internal reality; each woman as well as the relationship between them becomes a question mark. The fact of the monologues – the way the two seem to be content to listen to one another for long stretches – speaks to the closeness of their relationship, but the camera confronts us with the potentially fragile – possibly ridiculous (that twitchy grimace!) – nature of it.

Like the camera, men – of the past and of the present – question and intrude on the women’s relationship, too. Though the story moves forward methodically from one day to the next, announcing each day on red script title cards, it also flashes back to previous relationships with men the two women have had, men who have been invited to Virginia’s vacation home and thus into the realm of the two friends: Catherine, the year previously, brought a boyfriend; Virginia, invited a neighbor, Rich (Patrick Fugit). And Rich enters the space of the home in the present, too – encroaching, for Catherine, on the little land of her grief. The men, then, past and present, complicate and test the women’s relationship with one another, and conversations whenever the men are present highlight (equally uncomfortably and hilariously) the tensions and pettiness between the women.

In one instance, even when Catherine is welcomed into the space of Virginia and her lover, that is, into a canoe for an outing on the lake, the discomfort among them is visually palpable: Virginia at the bow, Rich at the stern, and Catherine hunched in the middle, sitting in a binding, bulky life vest, while the two lovers ply their oars to the lake, free limbed and easy, gliding over the water. Virginia is solicitous, concerned for her friend, but clearly ineffective at attempted comfort; Rich is teasingly mocking. Catherine in their midst is at once inside – physically sandwiched between the lovers – and outside – left out of their romantic, intimate bond even though her insider bond with Virginia remains. The scene is both poignant and comic: Catherine is as utterly pitiable as she is ridiculous.

Physical spaces, then – canoes, bedrooms, doors, hallways – as well as more ephemeral insides and outsides – faces, friendships, bodies, emotions – are thrust onto our attention, working together towards both a comic and rather horrific effect and pointing us towards what can and cannot be known about individual selves and connected selves. In one scene, Catherine, shut outside a door, hears a burst of laughter from within.  In another scene, Catherine, shut inside her bedroom, hears other eruptions of laughter from without, from the group of friends or neighbors who’ve suddenly materialized around Virginia. Within the intimacy of her friend’s home, she is shut out – or shut in.

Laughter – or smiling – or joking – functions generally throughout the story as a sort of inside-outside divider: where it joins – or seems to join one group of people around a particular joke – it shuts out those not involved. Depending on one’s position, then, laughter is either a joy or a horror, a cozy thing to unite two people, a sharp thing that might divide two others. So at one time Virginia laughs with Rich and invites him in while she shuts Catherine out; and at another time, Catherine enters the house smiling and silent, shutting Virginia-  who meets her gaze as she passes by – out of her secret joy.

So the film continues, throughout, to query relationships, to query interior spaces and the ways they are and are not connected to exteriors. It questions our ability to know and be known; it highlights the way we invite others in or shut them out, intentionally, unintentionally. Closeness in one moment might turn to betrayal in the next: shift things slightly and the terms change, and relationships – even one’s own sense of self becomes tenuous. For if what one assumed is a close relationship suddenly changes terms, if perhaps I don’t know you, and you don’t know me, then, perhaps, I don’t know myself, and the bones grind and shift under one’s skin, as Catherine claims hers do.

“My face hurts,” she says, and she says again, to Virginia, a real disorder or a false one, it is difficult to know.  For knowledge of Catherine, of Virginia, of the truth of their relationship to one another is a tricky thing. Even titles obfuscate. Words and conversations confuse and befuddle.

“I wasn’t speaking to you.”

“I thought you said something else.”

“What are you doing here?”

“Mind your own business, your majesty.”

“Why are you in the bushes?”

“I thought you were perfect.”

. . . and the questions and accusations about you and about me and about that other person who seems to be hanging around here, getting in between us, multiply. And my own internal pain – my grinding bones – I try to tell you, and you try to listen, but you don’t listen. And I won’t tell you.

And I won’t tell you why.  Maybe I am crazy.

The joke’s on you – or maybe it’s on me. And whether you laugh about it or cry or scream in terror, who can say? 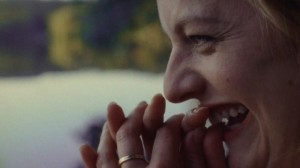 Queen of Earth is now playing at Sundance Cinemas Seattle.