Part of our coverage of the 2015 Vancouver International Film Festival.

Thom Andersen’s new essay film, The Thoughts That Once We Had is a proudly idiosyncratic interpretation of French philosopher Gilles Deleuze’s thoughts on cinema. Deleuze’s two volume set, The Movement Image and The Time Image, are the springboard for Andersen’s patented excursions into cinema’s past, built on a foundation of film clips both obscure and ingrained. Andersen’s film flits around Deleuze’s dense concepts, often teasing the first portion of a line with a resulting set-up clip, before transcribing the larger idea and presenting a montage representing it. I wouldn’t claim to understand what the hell Deleuze (and by extension, Andersen) is going on about half the time–it’s all very abstract and anyway, the quotations are onscreen for the briefest of seconds–but by gum, the thing works wonders despite the less learned background of the viewer. (In fact, the film’s biggest drawback will be the inevitable embrace by the high-falutin’ intellectual cognoscenti.)

Certainly a lot of the film’s goodwill comes from Andersen’s collection of clips, encompassing a century’s worth of beloved cinema. Extended sections include clips from Chaplin, Eisenstein, and Fritz Lang. Multiple works from directors Hou Hsiao-Hsien and Leo McCarey are also included. But standing on the shoulders of giants will only get one so far, and as usual, it’s how and what Andersen shows us that invigorates. For example, he includes the prelude to the famous mirror scene in Duck Soup, without showing us the mirror scene. He contextualizes and juxtaposes other images in elusive, yet electrifying ways. A vintage television clip of Norman Mailer whining poetically about the nascent creation of the World Trade Center bleeds into a lengthy aside on the correct origins of the popular song “The Twist”. 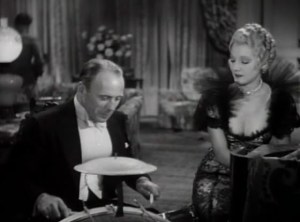 Andersen calls this film “a musical in a way” and it is so for a number of reasons. Most obviously, there is almost wall-to-wall music, starting with orchestral scores that focus on the silent cinema of Griffith and Sternberg, all the way to archival footage of a riot at a ’60s Rolling Stones concert. But it’s also the rhythms of the film that belie its musical pedigree. There is a buoyancy to the editing even when the focus zeroes in on less exuberant topics such as war and destruction.

Deleuze and Andersen talk about the “reflection of image” but in truth, The Thoughts That Once We Had is reflexive of image. It is a simulacrum of cinema, turning itself inward and inside out, creating new forms from old favorites. It’s also a mash-up of a mash note to the face of Marlene Dietrich, the power of the blues, and the infinite loops of Messrs Laurel and Hardy. That’s good enough for me.