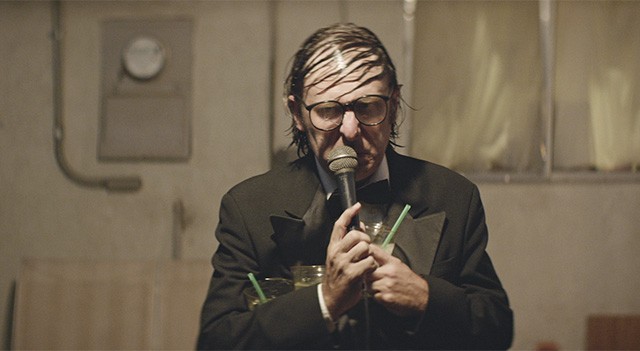 Rick Alverson’s new film Entertainment, isn’t perfect. At first, I didn’t know if I’d even call it great. If not for Neil Hamburger’s humor, the first hour of the film would feel endlessly repetitive and banal, situations reiterating themselves with seeming meaninglessness, mimicking The Comedian’s situation which repeats itself in a series of dive-bars, where he is only greeted with disappointment and indifference. Not for nothing is the only place where Hamburger elicits a response a prison. Self-defeat rules this comedian’s life, and so too the film; it seems humor itself is the only defense mechanism left before falling into the void of cynicism and despair. Alverson’s distance is disconcerting at first: as Phil Coldiron alluded to in his review, Alverson has an Antonioni-esque spacial awareness. But perhaps this is necessary to make distinct the difference between Hamburger the performer, and Turkington the actor. Yet both are very similar: Turkington attempts twice to connect to his daughter and fails, Hamburger attempts several times to connect to an audience and fails. Hamburger doesn’t use these life-disappointments as fodder for material, he rather vomits out mad, belligerent nonsense (admittedly for me, often quite amusing) But for all these lapses of humor, I was ready to give up on the film. “OH great, another movie about like, alienation or something and some shitty guy being an asshole.” There’s even an impossibly obvious shot where our comedian walks around in circles. But then Turkington/Hamburger has to face repercussions for his actions, and suddenly the film takes a sharp, unexpected turn into something far more abstract, forcing me to re-evaluate something I was about to write-off. It became clear that Hamburger/Turkington is on a sort of pilgrimage, a hellish progression from self-consciousness to self-awareness. 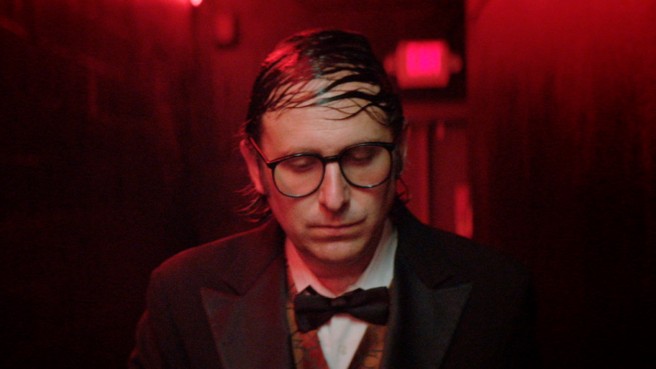 The film’s formal shift is radical, moving from complete exhaustion to being so alive that it becomes narratively incoherent. This is stymied by an unwatchable rant against a woman who merely asked a man to leave her alone, which also reveals a dialectic element to the film which had been heretofore unseen. Following the performance she attacks him outside, leaving him bloodied and going back to his room. Once he arrives however, he is incapable of taking responsibility for his action and the distance between Hamburger the performer and Turkington the actor dissipates. He rambles about performers needing protection, unable or unwilling to admit that he was the provoker, displaying that context is meaningless in regard to actions. And perhaps also to performance and living: are both psyches melding together? Or is there no difference between staging and living in that both are choices in a given moment which share repercussions? Or maybe Turkington chooses to stay in his disguise as Hamburger to avoid responsibility? Regardless, from this onwards the film takes on a surreal, dreamlike structure: an expressionist journey through The Comedian’s psyche. Scenarios seem as stream-of-consciousness as some of Hamburger’s jokes, the distinctions from one space to another become unclear, there are moments where the only visible distinction on screen is a the glow of a flashlight or even a candle. There’s an odd, indecipherable appearance from Michael Cera. Turkington/Hamburger runs into a woman giving birth in a bathroom and decides to help her: I hoped this would be a sudden repose from the film’s tone and be a surge of optimism. This wasn’t the case, and our Comedian continues walking what now seems a circle of Hell. Each image and cut stems not from a desire to record but rather put into manifest the colliding and shattering psyche of Turkington. This culminates in a cathartic moment: Hamburger emerges from a cake at a Hollywood party before collapsing to the ground in inconsolable tears. Then he jumps into the pool in front of him, breathing heavily like a baby at baptism.

There are probably many points in this movie where I might have laughed where I shouldn’t have. Some of them more so than others, but I found myself highly bemused (for no apparent reason) at an odd Spanish television show which periodically appears throughout the narrative, and which Turkington finds himself on in the film’s final moments. Watching himself on TV, he is slapped in the face by a fascinating Latino man with a bathrobe and oxygen tank, and is as amused as I was at these earlier sequences. But there is still something disconcerting: in this journey to self-awareness is Turkington too accepting futility? That he’s just a guy on a weird Spanish TV show? Does this laughter come from his recognizing what he truly is, and is able to laugh at his performance as though an audience member? Or is he laughing maniacally, again in recognition of what he actually is?