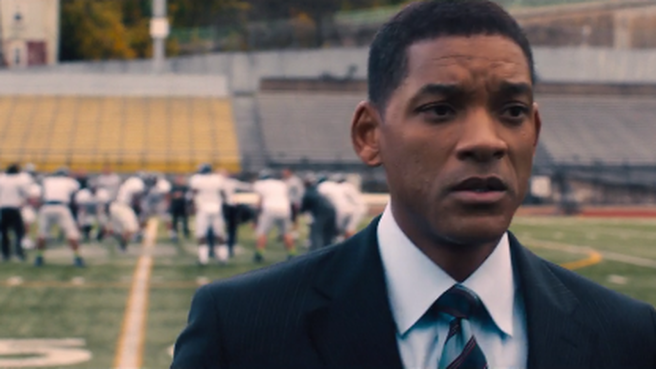 I was a most unlikely football player. As a 5’10”, 110 lb, 14 year old high school freshman, I literally knocked myself out for a few seconds attempting a tackle. The coaches didn’t let me play the rest of the game, or much of any other game, after that. I was mad at the time, all I wanted to do was play, but in retrospect, they probably saved my brain a lot of damage. The thing is, if I was 50 pounds or so bigger, they probably would have sent me right back on to the field.

Anyway, Concussion, opening this week just in time for the final two weeks of football season, is kind of terrible. It stars Will Smith in an Oscar-grubbing performance as Dr. Bennet Omalu, a Nigerian immigrant pathologist who first discovered evidence of brain damage in former NFL players (he did the autopsies for former Pittsburgh Steelers Mike Webster and Terry Long). Not content to be a scientific procedural, a social problem film along the lines of Spotlight, the film grafts an inspirational biopic onto the story. As with The Theory of Everything, Hollywood can’t seem to tell the story of a man of science without framing him as an instrument of specifically Christian theology (Omalu is apparently a practicing Catholic). In fact, more than anything the film is a Christian parable about a man who is tested by God: shown a glimpse of a Truth, he is tested in his resolve to defend and promulgate (evangelize) that Truth. That this serves to make the scientific findings of a Nigerian doctor more palatable for Red State apple pie God and Football moms in the Real America is surely not lost on the filmmakers. It just makes the whole thing very creepy.

There’s an actual story here, an Insider-type thriller about corporate greed and the exploitation of the poor (and mostly black) for the entertainment and enrichment of the wealthy (and mostly white). At times, it seems like the film is heading in that paranoid, conspiracy film direction the Omalu’s are plagued by telephone calls, his wife thinks someone is following her, etc, but it always pulls back and reframes the story in personal terms, deflating the implications that the league is responsible for any sinister actions. The two halves of the film, the propaganda story and the conspiracy thriller ,are at odds, each undermines the other. Every minute spent establishing Omalu’s credentials (not his scientific credentials, which are efficiently listed in a hilarious bit of manufactured exposition in the first moments of the film) as a man worthy of speaking to America is a minute not spent examining the web of corruption that is, and remains, the NFL. That the film doesn’t even address the current state of the sport, where the league has (finally) implemented “concussion protocols” in response to Omalu’s research, is unnerving. Like it wants us to think the NFL had sinned, but has since been shown the light and now everything is going to be fine.

One thought on “Concussion (Peter Landesman, 2015)”